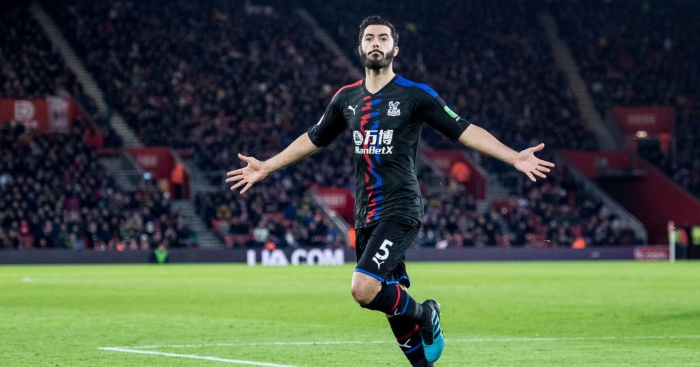 Sam Allardyce is currently preparing for a new relegation battle after taking over from Slaven Bilic at West Brom.

He joined the club just two days ago, but is already planning a big spending spree in January.

And that’s led to links with one of his favourite players from spells at Crystal Palace and West Ham.

FEATURE: Leeds fly in our Premier League winners and losers

According to the Daily Mail, Allardyce has targeted Palace defender James Tomkins as a priority transfer.

The report states that Allardyce has identified centre back as a position which needs improvement.

And Tomkins seems to be available after returning from a long term injury recently.

In his absence, the likes of Gary Cahill and Scott Dann have impressed in the centre of defence.

That means Tomkins could consider a January reunion with Allardyce if the Baggies launch a bid.

The 31-year-old played under Allardyce at West Ham from 2011 to 2015. During that time he became a first team regular as the manager prioritised defensive solidity.

He then moved to Palace in 2016 and played for Allardyce for another season.

Here’s what Allardyce told talkSPORT ahead of the January transfer window: “They (the board) are prepared to get some players, but we need to find where those players are and who wants to let a player go in this pandemic.

“I can’t suggest at this moment how many players we need.

“By the time I had finished four weeks and no wins in six games at Crystal Palace, I knew exactly what we needed to do and pushed Steve (Parish) beyond the brink of really where he wanted to go which paid off in the end.

“It will be a very important part I think and while the players here are trying their very best and had a fantastic gutsy performance at Man City, which I watched live on the TV, it is always good when a player sees a new player come in.

“And then sees that player on the training ground who will make them better. The difficulty is finding that player and we will have to do our best to do that.”