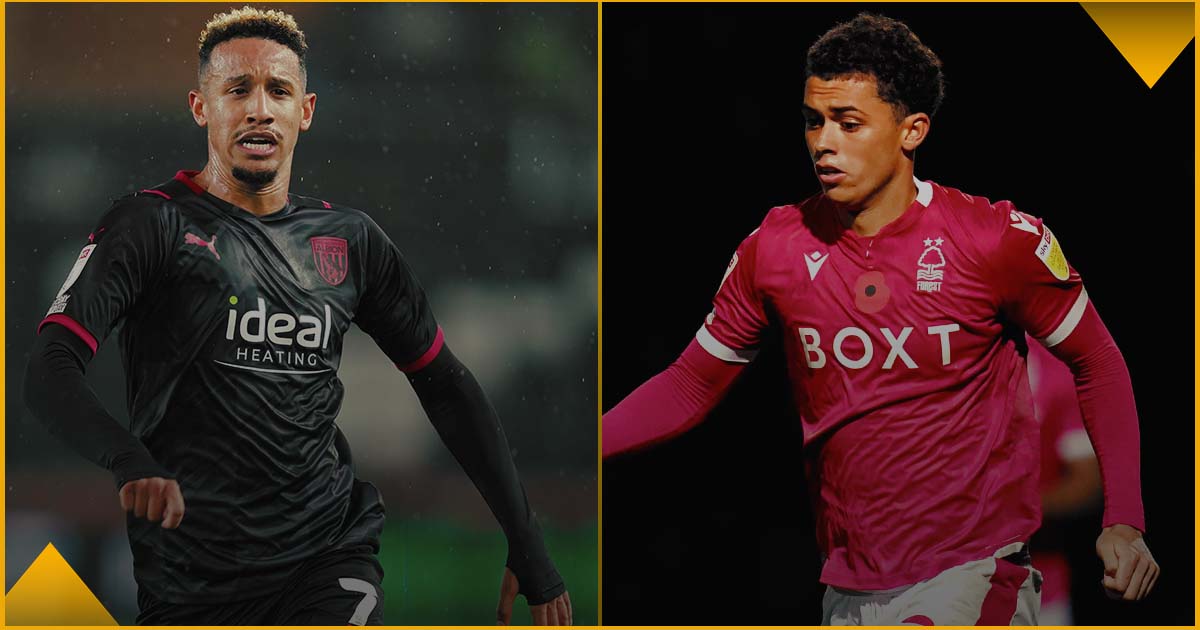 After all the midweek action, we’re back for some more Championship action as Nottingham Forest travel to the Hawthorns to take on West Brom, Benjamin Bloom has all you need to know.

Setting The Scene – Where Have The Wins Gone?
There have been times this season where both West Brom and Nottingham Forest have looked like they’re ready to eat up the ground in front of them and a sustained points-winning run is on the cards. The Baggies won seven and only lost one of their opening 12 matches this season, the table at that point suggested strongly they were one-third of a three-horse race for the automatic places along with Bournemouth and Fulham. In contrast Nottingham Forest had a dreadful start, they lost six of their first seven and parted company with manager Chris Hughton with the club sitting well bottom in mid September. What followed was a fantastic surge of five wins in the next six games under caretaker boss Steven Reid and newly installed manager Steve Cooper, that certainly realigned the Forest fans expectations for what could’ve been a disastrous season.

With both sides having experienced periods of winning momentum, a vital quality in the 46-game Championship slog, the bloom has come off the rose somewhat as we go into Friday’s clash between the two clubs. It should be pointed out that Forest have lost only one in the last 12, but the draws are coming thick and fast now and a run of one win in the last six has put the brakes on what looked like a viable top ten surge. It’s worse for West Brom, although their run of one win in five is one game fewer than Forest’s, that three-horse race looks like it’s missing a Baggies-shaped filly. As always, a game between two sides in need of a win gives an opportunity to change the narrative, with the archetypal ‘unhelpful draw’ waiting in the wings if the current course continues.

One To Watch – Sam Johnstone (West Brom)
I’m quite surprised Sam Jonhstone is still with us down in the Championship this season, I suspected that given his good Premier League performances in goal for the Baggies last season he might be following Matheus Pereira out the door. That’s not a slight on West Brom of course, just the reality of the financial differences between the top two divisions and the regular selling pattern set out by relegated teams over the past few seasons. I’m not sure if bids were made for Johnstone, but him staying put is certainly a big plus for Valerien Ismael and the Baggies fans.

Johnstone found his way to West Brom from Manchester United via far too many loans down to the EFL to mention. He was unfortunately at Old Trafford during the David De Gea era and also with Dean Henderson treading a similar path as a noticeably good Championship loanee. Henderson was the one who stayed and fought at Manchester United but both keepers were in the Premier League last season, and both have found their way into the England squad, with Johnstone making his debut and actually recording an assist for a Jack Grealish goal against Andorra.

The ex-Villa loanee has settled well under Ismael and as an international calibre player got his head down and his job done. When one considers Johnstone has gone from defending his goal line behind a Sam Allardyce low block, to patrolling the edge of his area behind a Valerian Ismael high press, you could forgive him a short adjustment period.

Where the season takes West Brom may or may not influence Johnstone’s next step, as the England keeper’s contract expires at the end of the campaign. Basic logic suggests that having gone into the last year of the deal Johnstone may well be about to let it run to its conclusion and leave on a free, with West Brom unlikely to want to unload a key asset mid-season for a cut down fee. As the Baggies’ automatic promotion push has stuttered over recent weeks perhaps the odds of Johnstone being in the Premier League next season are better than that of his club, who will surely hope both club and player can find their way back up together.

One To Watch – Brennan Johnson (Nottingham Forest)
When asked to pick out the season’s young breakout talent in the Championship back in August there wasn’t too much foresight needed when looking through the Nottingham Forest squad. Young attacker Brennan Johnson had been on most people’s radars a fair while, his debut had come from the bench back in August 2019, and as the son of excellent ex-Forest striker David Johnson, his name and lineage already carried a little extra gravitas.

Johnson’s development has been well managed by Forest. Not quite ready yet for the Championship, he spent last season on loan at Lincoln in League One. Alongside all the normal arguments about competitive football and the rough and tumble of the third tier, the loan placed him in a well drilled and good footballing Lincoln side who reached the play-off final under Michael Appleton. Johnson started 41 games, recorded 16 goal contributions, and throughout the season occupied most of the attacking positions in the front three or four positions in Appleton’s modern single striker team shape.

The progress has been almost by the book, a summer return to his parent club followed, with Johnson ready to become a Championship player and his reputation swelled by regular involvement with the full Wales squad. In fact that reputation provided the only danger to Forest’s well-executed plan, as newly promoted Brentford sniffed around Johnson for a summer transfer up to the Premier League. I’m sure they’ll be back. It’s been a good first Championship campaign for Johnson, 18 starts and seven goal contributions have already been recorded, and his link up with Phillip Zinckernagel looks an exciting one. In the long term the trend looks like it’ll continue upwards for the player, in the short term Steve Cooper will look at Johnson’s pace and directness against West Brom’s high defensive line as a potentially productive route to success at the Hawthorns on Friday night.

Key Battle – Valerien Ismael v Steve Cooper
Six months is a long time in football, things change so quickly and move at breakneck speed, especially in the wonderful world of the Championship. Cast your mind back to the middle of May and the extraordinary ‘behind closed doors’ 2020/21 regular season had come to an end with just the play-offs remaining before the Euros kicked off in early June.

Sandwiched together in the middle of the four play-off positions were Swansea and Barnsley, the Swans losing semi-finalists the previous season, and Barnsley after an amazing rise from near relegation one year prior. It was Swansea who found their way to the final after securing a vital away win in the first leg, before seeing out a draw in the home leg to find their way to Wembley. Why is a Swansea v Barnsley play-off semi-final six months ago relevant to this Friday’s game in any way? The answer resides in the dugout, as the two managers who went head to head over that two legged semi were none other than Valerian Ismael and Steve Cooper.

I said things move at breakneck speed, fast forward six months and we’ve seen Ismael swap Barnsley for West Brom, with Markus Schopp having already come and gone at Oakwell and Poya Asbaghi now in situ. Steve Cooper saw the big changes ahead at Swansea and removed himself from the situation, he didn’t have to wait long for the Forest job to come up and jumped straight back on the carousel. Cooper and Ismael will rekindle last season’s rivalry with Forest fans believing that their manager has Big Val’s number, especially when we add on Swansea’s regular season double over Barnsley to their post season play-off triumph.

Inside Insight – West Brom (@LouisBent_ from @TheBaggiesPod)
Despite a disappointing loss at Huddersfield fueling fans tension towards boss Valerien Ismael, the performance on Tuesday night against Blackpool was a significant improvement. Albion played with fluency, but it confirmed what many supporters have known for a while, that a clinical striker is the missing piece in this puzzle.

Facing up against Nottingham Forest on Friday will prove a much more difficult task than it would’ve when they were under Chris Hughton’s management. However, I can see a similar tale unfolding as the one against the Tangerines, creating chances but failing to convert. Without that striker Albion will continue to falter, however, a better showing on Tuesday gives me a tad bit of confidence that we can get a result against Forest.

Inside Insight – Nottingham Forest – (Max Hayes @MatchDayWithMax)
A freezing cold night under the lights awaits with 2,000+ Forest fans making the trip to the Hawthorns on a Friday night! Forest have had a great few months and it’s a positive toke to be a Reds fan right now. With 20 points out of a possible 33 since Steve Cooper arrived back in late September.

With the Reds yet to lose an away game under Cooper, Forest fans will be quite confident going into the game against the Baggies. It’ll be tough, and we know that. It’s the championship – it’s never an easy league but the way Cooper has galvanised the squad and fans together gives us real hope.

Speaking to some West Brom fans it sounds like they’re quite negative at the moment, but in my opinion with the Baggies 3rd in the league it’ll be probably the most challenging encounter Forest will face so far this season. West Brom have good squad depth, and with the likes of Jordan Hugil who seems to be a super sub at the moment. It’ll be a difficult one, but I’ll be positive and go 2-1 Forest, I just hope I’m warm in that away end!