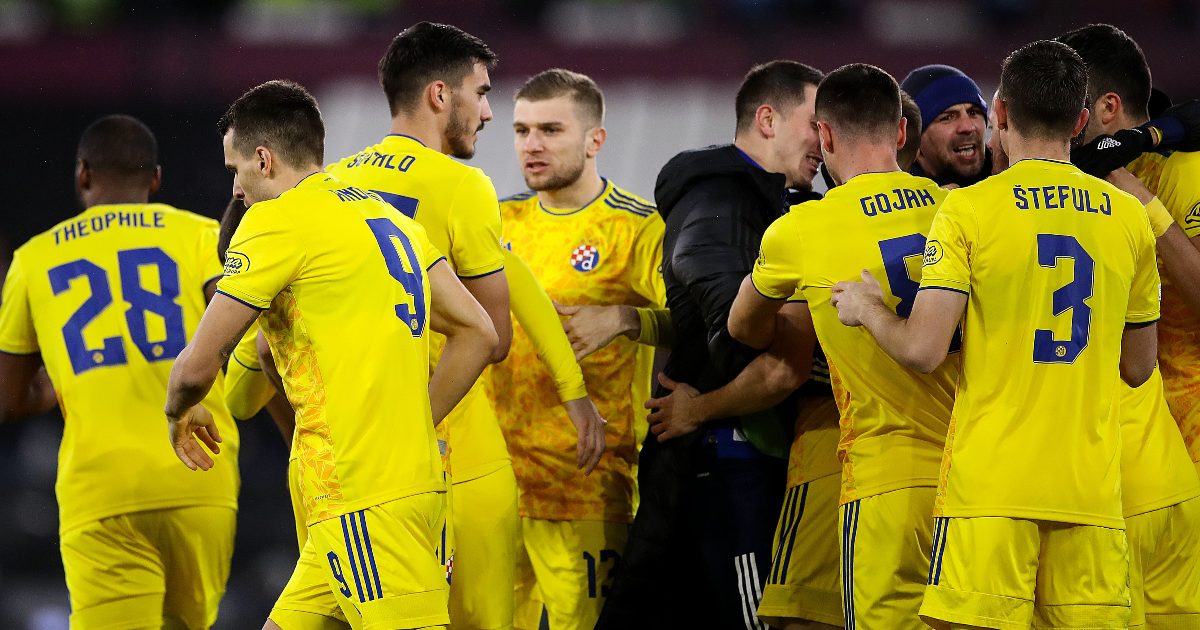 Ahead of Thursday night’s game, West Ham had already sealed top spot in Group H. They picked up 13 points from their first five outings.

In attack 17-year-old Sonny Perkins – who was 196 days old when Mark Noble made his Hammers debut – lined up in the same team as the long-serving club captain.

Another two debutants, Freddie Potts – the son of former Hammers skipper Steve – and Keenan Forson were introduced late in the second half on a memorable night for the club’s academy.

However, it was a tough start for West Ham’s rookies, who found themselves a goal behind after only three minutes, although there was little any of them could do about it.

Instead it was one of West Ham’s senior citizens, Andriy Yarmolenko, who failed to close down Croatia dangerman Mislav Orsic out on the left wing.

Orsic, whose hat-trick knocked Tottenham out of this competition in March, cut inside onto his right foot and curled a stunning strike past Hammers goalkeeper Alphonse Areola into the top corner.

Two of West Ham’s youngsters almost combined for an equaliser when Ashby’s cross from the right found Perkins, but his header flew over the crossbar.

The hosts were almost caught out again when Ashby and Baptiste went for the same ball, forcing Areola to dart out of goal and deny Orsic a second.

West Ham’s regular first-teamers needed to take some of the pressure off, so Yarmolenko and Pablo Fornals both ran at the Dinamo defence only to see their shots blocked before half-time.

The youngsters settled down after the break and – with Dinamo needing only a point to progress in second place behind West Ham – the match was even less-keenly contested.

Dinamo’s ex-Cardiff forward Kevin Theophile-Catherine volleyed the ball wide from a corner and Orsic forced another smart save from Areola, while the Hammers offered little in response, despite the promptings of substitute Said Benrahma.

However, merely being in a position to hand out a host of debuts was a triumph in itself for Moyes and the club, given their impact on the continent this season.

The last 16, and the chance to rub shoulders with the likes of Barcelona, Sevilla and Porto, awaits for Moyes and his boys.