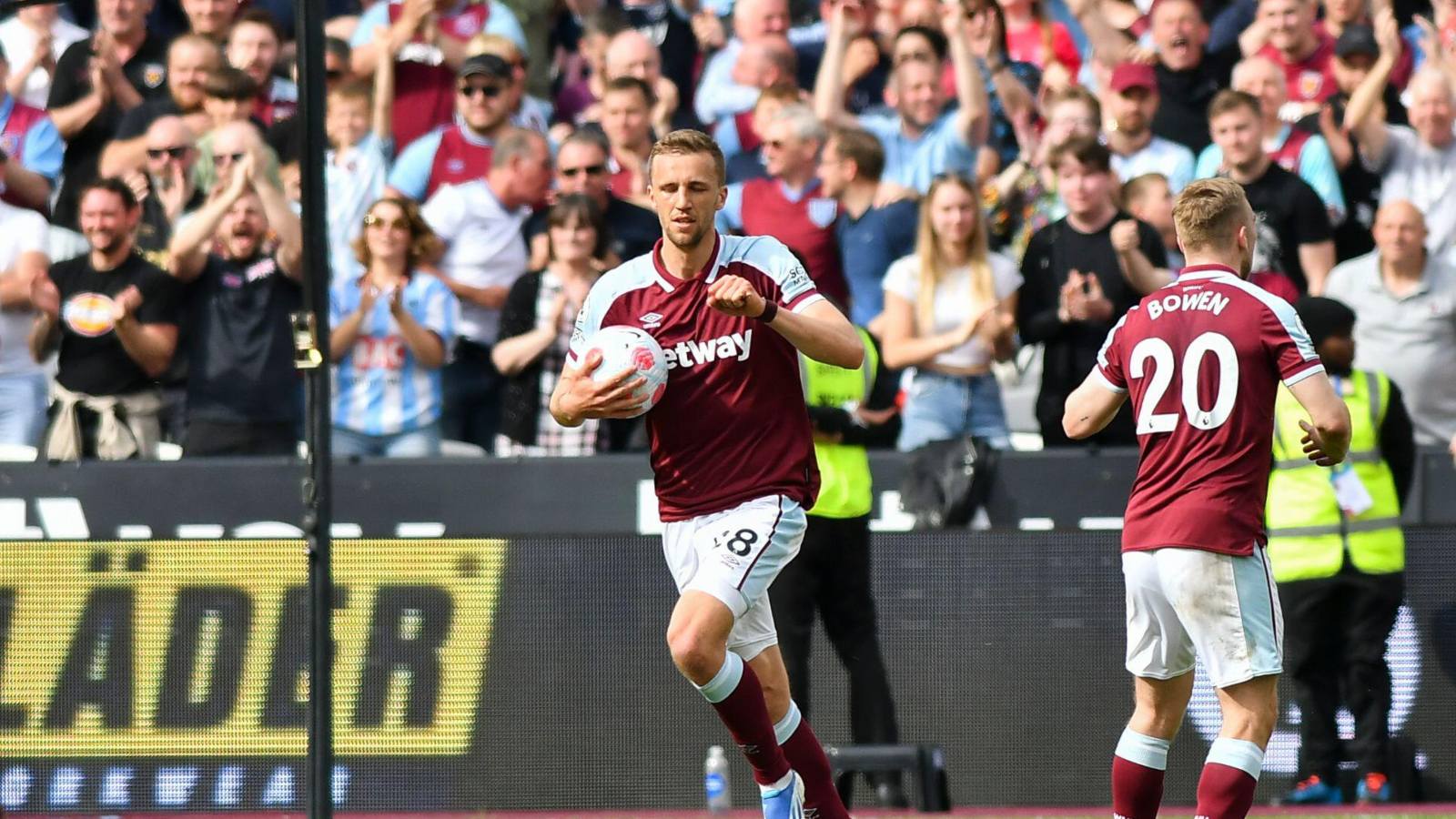 Burnley battled to a point in their first match since the shock departure of Sean Dyche, but the 1-1 draw at West Ham came at a cost with Ashley Westwood suffering a horrific injury.

The midfielder’s leg seemed to buckle underneath him as he challenged for the ball with Nikola Vlasic.

A stretcher and oxygen were immediately brought on, while Vlasic and Aaron Cresswell, who was closest to the incident, looked distraught and had to be comforted by team-mates.

Wout Weghorst opened the scoring moments later, but Maxwel Cornet’s dreadful penalty miss proved pivotal as West Ham, on the back of their Europa League heroics in Lyon on Thursday, rallied to snatch a point through Tomas Soucek.

Relegation-threatened Burnley, with under-23 coach Mike Jackson in charge following Dyche’s sacking, are now three points behind Everton in 17th.

West Ham, not so fresh following their Europa League exertions in Lyon on Thursday night, almost opened the scoring after 10 minutes following a well-worked corner routine.

Declan Rice laid off Manuel Lanzini’s short corner to Jarrod Bowen, whose initial shot was blocked before his follow-up was clawed away at full stretch by Nick Pope.

Moments later Cresswell’s well-struck volley was cleared off the line by James Tarkowski, with Bowen, sliding in, unable to convert the rebound.

There was then a nine-minute delay while Westwood was treated – yet three minutes later Burnley took the lead, Weghorst rising above Soucek to nod in the rebound after Jay Rodriguez’s header came back off the crossbar.

The celebrations were understandably muted, with Weghorst pointing at the bench in support of his stricken team-mate.

Burnley should have doubled their advantage after Cornet chased Josh Brownhill’s long ball and raced through on goal.

The Ivory Coast winger was brought down by Hammers goalkeeper Lukasz Fabianski, but, after picking himself up, he sliced the penalty, Burnley’s first spot-kick of the season, horribly wide.

West Ham almost hauled themselves level after a Dwight McNeil pass inadvertently sent Bowen away on the break.

Rice fed Lanzini down the left, but Soucek could not convert his cross at the far post.

However, Soucek did come up trumps in the 74th minute when he bundled in Lanzini’s free-kick with his shoulder.

West Ham came closest to a winner but were denied three times by Pope, who tipped a fierce Antonio drive over and produced another fine save to claw out Issa Diop’s header before denying Antonio again in a one-on-one.