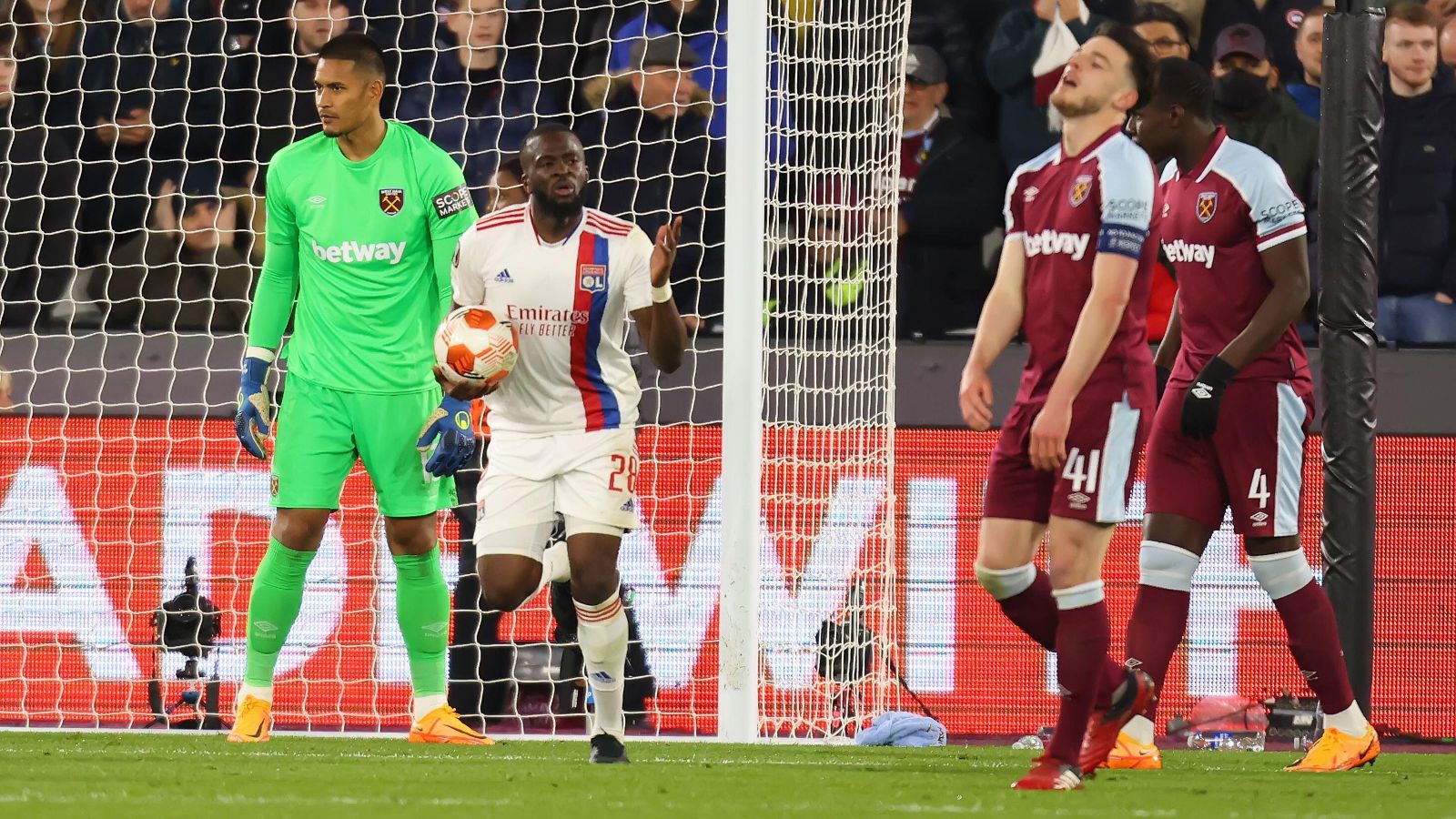 Tanguy Ndombele equalised for Lyon as 10-man West Ham United earned a draw in the first leg of their Europa League quarter-final.

Aaron Cresswell was harshly sent off before half-time for his challenge on Moussa Dembele.

This sending off could have easily left West Ham with a mountain to climb heading into next week’s second leg in France.

But Bowen’s second goal in as many matches, after a month out injured, put the 10 men 1-0 up before Tottenham loanee Tanguy Ndombele hauled Lyon level.

Nevertheless, a draw keeps West Ham’s dream of a place in the semi-finals, against either Barcelona or Eintracht Frankfurt, well and truly alive.

It promises to be a spicy return leg in the culinary capital of France after tempers occasionally boiled over, while Dembele’s Cristiano Ronaldo-style wink after Cresswell’s red card will not have gone unnoticed among the Hammers ranks.

Lyon may be having an erratic season domestically – they currently lie ninth in Ligue 1 – but they are unbeaten in this competition and knocked out Porto in the last 16.

They are also seasoned European campaigners and quickly began to showcase their repertoire of the darker arts, infuriating West Ham when Jerome Boateng and Ndombele both stayed down after no foul had been given.

German referee Felix Zwayer seemed taken in by their antics, stopping play each time with West Ham looking to attack.

Then, in first-half stoppage time and with West Ham frustration growing, Cresswell suddenly found himself chasing down Dembele and pulled him back on the edge of the box.

Kurt Zouma was also on the scene as cover but Zwayer decided Cresswell was the last man and pulled out a straight red card, to the obvious delight of the winking Dembele and the dismay of David Moyes.

The Hammers manager’s grasp of German is not known, but he evidently made his feelings clear enough as Zwayer booked him as he stormed down the tunnel.

But West Ham’s sense of injustice fuelled them into taking the lead seven minutes into the second half.

Boateng made a mess of his attempt to control the ball and it rolled behind Bowen, but the winger managed to retrieve it, turn and clip the ball over Lyon keeper Anthony Lopes via a deflection off the sliding Boateng.

However, Lyon grabbed a 66th-minute equaliser when Ndombele got in the box to fire home from six yards after a cross from substitute Tete hit Ryan Fredericks.

There was a sour note to the match after a pitch invader – the second of the game – jumped out of the home end and actually stopped a promising Hammers attack before he was escorted off.

Dembele put a header over as West Ham saw out eight nervy minutes of stoppage time to give themselves a fighting chance in seven days.