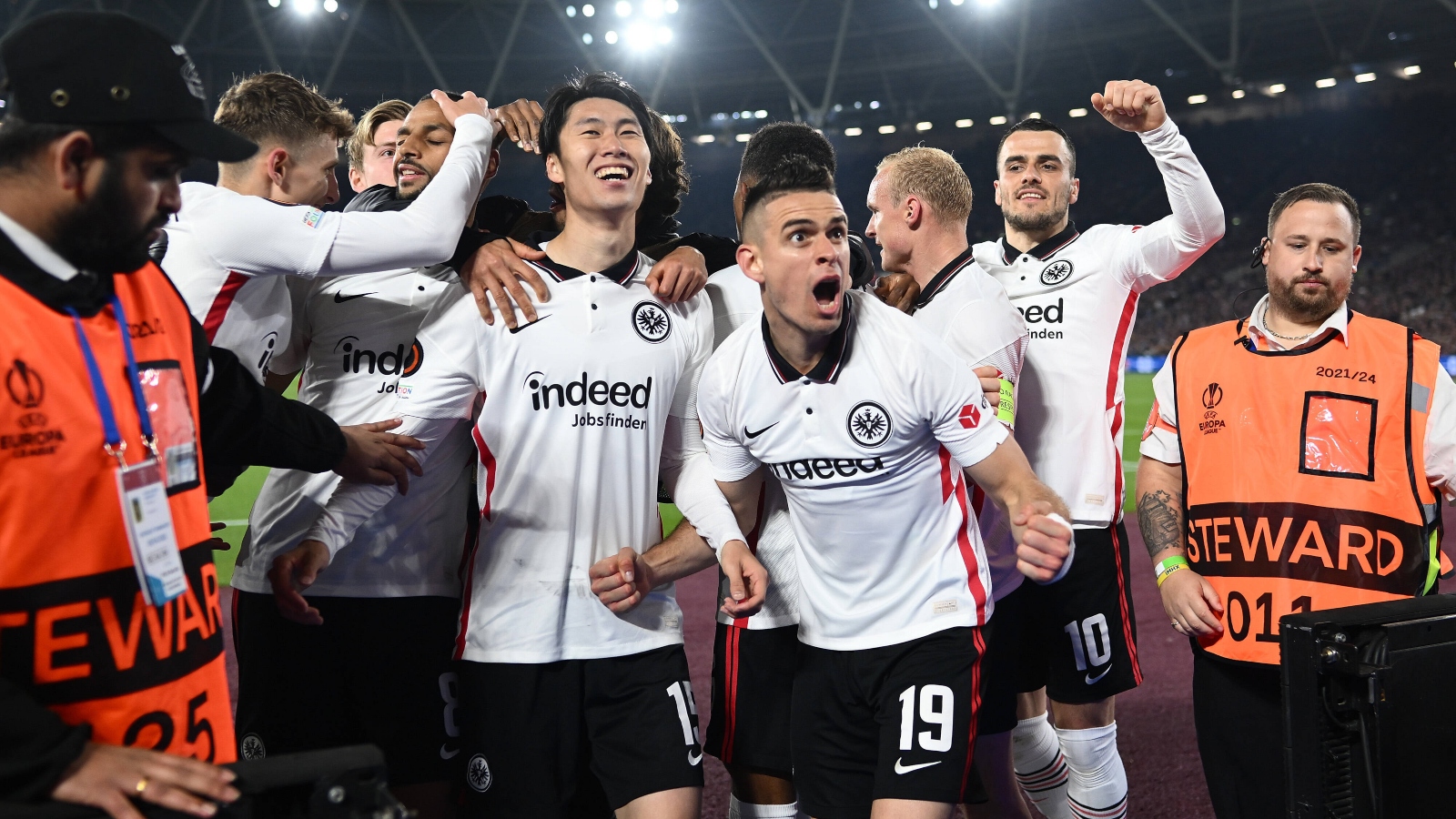 West Ham have it all to do in next week’s second leg after suffering a 2-1 first-leg defeat to Eintracht Frankfurt in the Europa League semi-finals.

David Moyes’ side were left to rue defensive errors which allowed Frankfurt to take the lead inside the opening minute at the London Stadium through Ansgar Knauff’s header.

West Ham have a lot of work to do, as Eintracht Frankfurt win with class

The Hammers were able to draw level inside the first half, with Michail Antonio bundling the ball over the line for his first goal since March 2.

However it was not enough for the London club on the night and Frankfurt were able to retake the lead in the second half, with Daichi Kamada slotting the ball past Alphonse Areola.

Frankfurt had looked an enticing prospect for the Hammers, currently ninth in the Bundesliga, but they started the game full of confidence having knocked European giants Barcelona out in the quarter-finals.

Inside the first minute, Frankfurt stunned West Ham to take the lead. The ball was played in from the left to Almamy Toure on the edge of the box and his lofted pass found Knauff who headed home.

The home side tried to get back into it with a lofted cross towards Tomas Soucek, but it was just over the towering midfielder.

Frankfurt lead after the first leg. But there's still plenty to play for in Germany. #UEL | #WHUSGE pic.twitter.com/WvyCSl7hFv

West Ham had an ideal chance to level the tie in the 13th minute when Jarrod Bowen drove through the Frankfurt defence but his final shot was tipped onto the woodwork by goalkeeper Kevin Trapp.

However the Hammers only had to wait until the 22nd minute to find the equaliser.

Manuel Lanzini stepped up to take a free-kick and lofted it into the area, with Kurt Zouma flicking the ball back across goal for Antonio to bundle it over the line.

In the 39th minute, West Ham found themselves exposed at the back as Knauff was played through with a ball that carved open the home side’s defence. The striker’s touch was poor and he rounded the keeper but ended up firing over the bar.

The second half started in the same fashion as the first half ended, with West Ham having a chance when Antonio picked out Soucek, but the Czech international mistimed his volley, hitting it into the ground then wide of the target.

Frankfurt retook the lead as West Ham yet again left themselves open at the back.

Kamada had the final touch after Craig Dawson stepped out of position to allow a ball from Jesper Lindstrom to get through the West Ham backline.

Areola was equal to Djibril Sow’s attempt, but Kamada was able to tap home from the rebound.

Minutes after coming on Said Benrahma almost levelled the tie with a clever strike from outside the area, but his deflected shot looped narrowly over the goal.

West Ham tried to push for an equaliser but struggled to break through the German side’s defence and it was Frankfurt who almost wrapped it up in the 79th minute when Kamada’s deflected effort hit the woodwork.

In added time, the Hammers had a final chance to level the tie with Bowen’s attempted overhead kick but despite a good connection his effort rebounded off the crossbar.