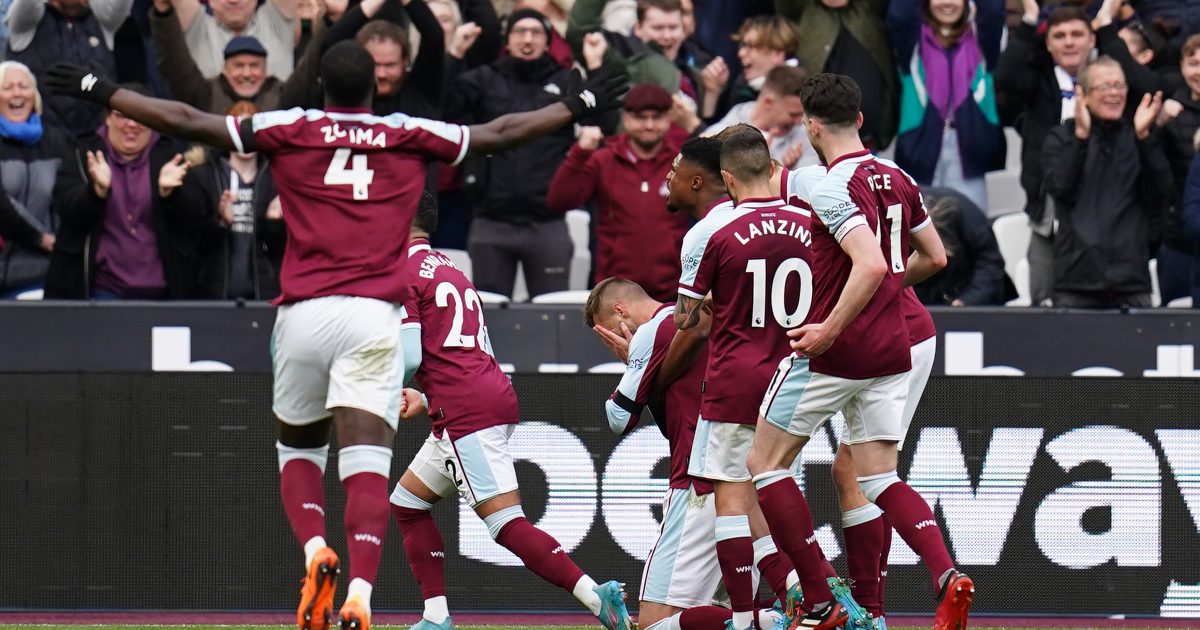 The Ukraine international was involved for the first time since being granted compassionate leaving due to the ongoing conflict in his homeland.

Yarmolenko rightly received a standing ovation from both sets of fans when he came on off the bench.

West Ham have work to do, but they’re still in it against Sevilla

And the 32-year-old, whose family are still in Ukraine, was in tears after firing West Ham into the lead in the 70th minute.

It was a memorable, poignant moment in an otherwise forgettable match at the London Stadium.

But it came at a cost with injuries to Antonio and Aaron Cresswell, bad news with the second leg of their Europa League last-16 tie against Sevilla just four days away.

Left-back Cresswell had been West Ham’s chief attacking threat, creating an early chance for Said Benrahma who skipped between two challenges but fired too close to Emi Martinez.

Villa, who lost full-back Lucas Digne to an early hamstring injury, almost took the lead when Ramsey brushed off Ben Johnson to burst into the area and feed Philippe Coutinho, whose attempted back-heel was blocked by Lukasz Fabianski.

The best chance of the first half fell to West Ham when Cresswell swung in another cross which Tomas Soucek met with a glancing header that flew inches wide.

The half ended on a painful note for Villa’s Douglas Luiz, who took an accidental kick to the mouth from Manuel Lanzini.

West Ham’s hectic schedule, and painfully thin squad, looked to be catching up with them when Antonio and Cresswell limped off in quick succession after the break.

Villa were inches from going ahead when Danny Ings prodded the ball goalwards from a corner and Fabianski tipped the ball against a post.

Moments later, from a West Ham corner, Kurt Zouma’s header was parried into the air by Martinez and Craig Dawson headed the rebound over.

But then came Yarmolenko’s moment, and what a goal it was. The wideman took one touch to control Benrahma’s lay-off with his right foot, then spun and lashed the ball home with his left.

The London Stadium erupted as Yarmolenko’s team-mates engulfed him, and he emerged from the celebrations in tears.

Fornals doubled West Ham’s advantage when he swept home Benrahma’s cross, and although Ramsey made it a nervy end with an 89th-minute strike the hosts held out.