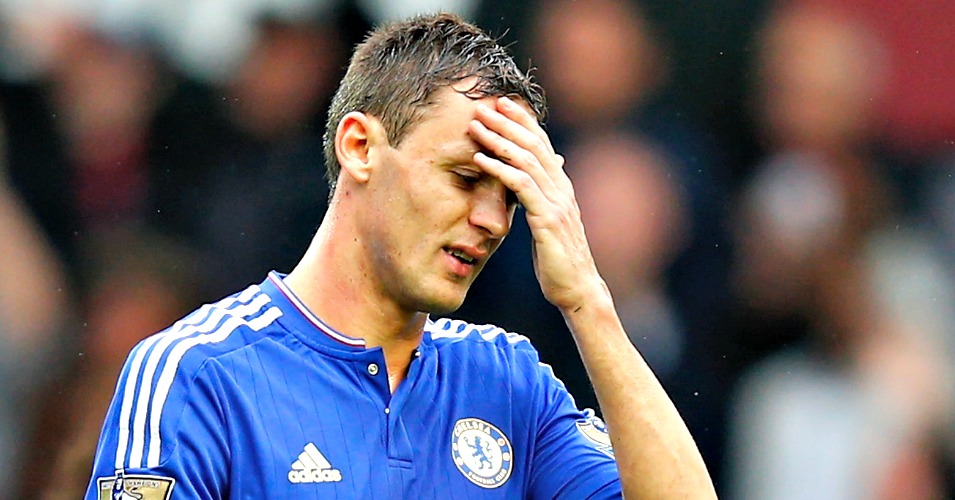 Jose Mourinho, Nemanja Matic and a Chelsea assistant were sent off as the Blues fell to a 2-1 defeat to West Ham.

Andy Carroll’s second-half header condemned the Blues to a fifth defeat in 10 matches as the ailing champions imploded at Upton Park.

Having seen Matic red-carded on the stroke of half-time, and first-team coach Silvino Louro dismissed from the dugout, the embattled Blues boss did not emerge from the tunnel after the interval.

Mourinho, who already has a suspended stadium ban hanging over him for previous indiscretions this season, is now likely to find himself in hot water with the FA once more.

Meanwhile, on the pitch, Carroll’s first goal since January ensured West Ham added Chelsea to Arsenal, Liverpool and Manchester City in their list of high-profile scalps this term.

Mauro Zarate had fired the hosts into an early lead, and although the 10 men of Chelsea responded admirably in the second half and levelled through Gary Cahill, substitute Carroll hammered another blow into their crumbling title defence.

Chelsea did not look at the races in the first half – perhaps their midweek exertions in Kiev, from which Mourinho had named an unchanged side, had taken their toll.

Certainly Ramires and Diego Costa between them should have dealt with Dimitri Payet’s near-post corner in the 17th minute. Instead they made a complete mess of it and the ball flew across the box to Zarate, who had arrived just in time to drill it first time inside Asmir Begovic’s near post.

Chelsea were millimetres from equalising 10 minutes before the interval when Kurt Zouma’s downward header was hacked clear by Manuel Lanzini on the goal-line.

And their meltdown began in the 44th minute when Matic, already on a yellow card after fouling Zarate, cynically brought down Diafra Sakho to earn his marching orders.

The Blues players surrounded referee Jonathan Moss in protest – which could also yield another FA charge – with the official eventually booking Fabregas and skipper John Terry.

Mourinho stood impassively on the touchline but, behind him, the incensed Louro’s histrionics saw him removed from the dugout.

Only when the Portuguese failed to retake his position pitchside, instead appearing in the stand amidst a flurry of camera phones – which no doubt would not have improved his mood – did word filter out that he too had been sent off.

Yet Chelsea managed to haul themselves level in the 56th minute after Zouma and Cahill challenged for Willian’s corner, the ball falling kindly for the latter to thrash home.

However, Carroll had the final say, emerging from the bench to powerfully head in Aaron Cresswell’s cross with 10 minutes left to inflict another damaging defeat on Mourinho and the Blues.