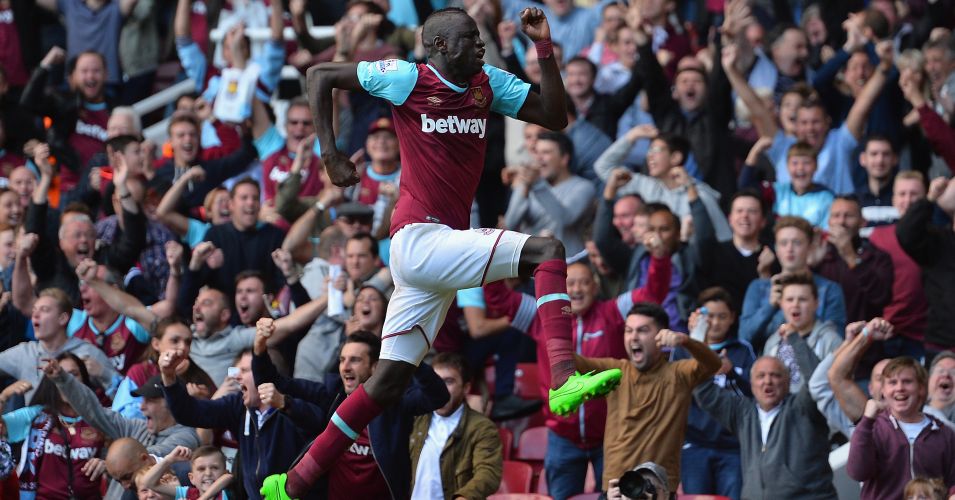 Cheikhou Kouyate scored in the final minute to give West Ham a 2-2 draw in a wonderfully entertaining match against Norwich City.

Substitute Nathan Redmond looked to have given Norwich a first win at the Boleyn Ground in 26 years with a fine late effort.

However, deep into stoppage time, Kouyate bundled the ball home following a goalmouth scramble to secure a share of the spoils.

Earlier, Robbie Brady had fired the Canaries into the lead, before the Irons levelled through Diafra Sakho.

West Ham had made a positive start, with Kouyate diverting a cross from Noble straight at Norwich keeper John Ruddy.

It was the visitors, though, who went ahead on nine minutes.

Noble’s crossfield ball from the left was too short for defender James Tomkins, and Brady was onto it like a flash.

The former Hull man darted into the penalty area before dispatching a low finish past Adrian.

The expected response from West Ham, so impressive away this season and who could have moved level at the top of the Barclays Premier League table, did not come.

Norwich almost doubled their lead when Jonny Howson fired over from 12 yards after a cutback into the penalty area by full-back Martin Olsson.

Cameron Jerome was then played in down the left by Brady, but drilled a low shot into the side netting.

They proved costly misses as West Ham equalised on 33 minutes.

Payet got clear down the right and his low centre back into the six-yard box was swept home by Sakho.

With the Boleyn Ground now in full voice, Manuel Lanzini whipped a 25-yard free-kick over the wall and just wide.

West Ham finished the first half strongly, as Ruddy was caught in No Man’s Land attempting to punch at the edge of the penalty area with Sakho hooking the loose ball over an empty net.

Norwich came close to regaining the lead at the start of the second half when Howson’s rising 20-yard strike was tipped over by Adrian.

West Ham should have been in front when Payet’s cross drifted through the six-yard box to an unmarked Sakho who somehow headed straight at Ruddy, before Kouyate sliced the rebound wide.

Ruddy then produced a save of the real quality to get down to his left and push away a low effort from the busy Payet.

At the other end, Adrian made a stunning point-blank stop to deny Jerome after the Norwich striker latched onto a cutback from Steven Whittaker, drilling in a fierce volley.

With just nine minutes left, Norwich looked to have snatched a winner through a sublime goal from Redmond.

West Ham failed to clear a corner, and the ball was played back out to Redmond on the right by Wes Hoolahan. The England Under-21 forward thought about the cross, but cutback inside before curling a wonderful effort into the far corner.

However, with two minutes of added time played, the home side snatched a point after a free-kick from the right caused havoc in the Norwich six-yard box and Kouyate was on hand to lash the loose ball into the net.