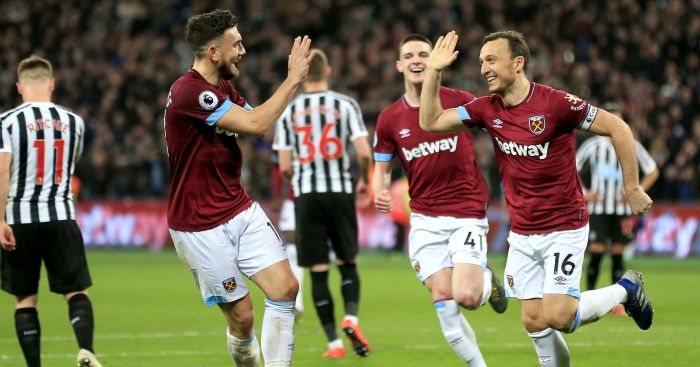 Which Premier League club has had the weirdest season? West Ham United. Actually, that was a reasonable bet before the season started. But this isn’t your typical West Ham weirdness. It has little or nothing to do with owner incompetence, supporter anger, or even the London Stadium. It’s mostly about what’s happened on the pitch – which for West Ham makes it kind of weird in itself.

What happened first on the pitch was that the side lost their first four league matches. The opposition was difficult: Liverpool, Arsenal, Wolves and a fast-starting Bournemouth. But that wasn’t supposed to happen, certainly not under Manuel Pellegrini.

Starting all four matches was one Jack Wilshere. He wasn’t the answer, or even the right question, and he soon dropped from sight, managing only five more minutes in December. Ankle problems, you know, but it was clear he wasn’t going to solve the Hammers’ perennial midfield problem.

And then suddenly it was solved with the emergence of Declan Rice. The previous season he had started 15 matches, almost all at centre-half. In fact, his only two starts in midfield had been nightmarish, and he was even removed against Newcastle after his mistake led directly to an opposition goal.

His first few starts under Pellegrini didn’t really suggest he was the answer either. But in weeks 5-7, against Everton, Chelsea and Manchester United – two convincing wins around a 0-0 draw – he arrived in spades. And that was simply that. He’s now a fixture, and ready to play for England.

Meanwhile Felipe Anderson was proving himself the league’s most exciting newcomer, with dazzling all-around play in attack, and some pretty useful defence as well. Starting with the win over Manchester United, he scored eight goals in 13 matches, climaxing the run just after Christmas with a rapid-fire brace that turned the game at Southampton.

And then suddenly he became ordinary. It’s now 11 in a row without a goal. Pass completion percentage through the Southampton match was 77.5, since then 73.8. Shots per match have dropped from 1.68 to 0.91. After an awful first 45 minutes last weekend at Cardiff City, Pellegrini yanked him.

While we’re speaking of sudden changes, there’s Samir Nasri. When he was acquired in January, it seemed the strangest of moves: a high-salary player who hadn’t played in almost a year. Whereupon he started against Arsenal and was frankly brilliant. He started the next week against Bournemouth, then got injured. He’s made the pitch only twice in the last seven matches, neither time for more than 45 minutes.

Then there’s the strange case of Marko Arnautovic, who went from pariah to hero under David Moyes, and remained a beloved figure until January, when he suddenly (there’s that word again) said he wanted to go to China. Maybe it was just leverage to get a new contract, which naturally he signed only a few weeks later. But since then he’s barely contributed, supplanted in the line-up by Javier Hernández, and once even Andy Carroll.

And how about Robert Snodgrass, one of the league’s most unlikely regulars? Although he had been relegated with Norwich City and Hull City, West Ham took a chance and signed him in January 2017. Seven months later ‘he was told he could leave the club’, as the euphemism goes. But there were no buyers, so he spent the year on loan racking up numbers with Aston Villa in the Championship. This season, stepping back up a level and over 30, he could hardly have expected to get a look-in under Pellegrini. But he’s made 28 appearances (21 starts), with his assists/90 and key passes/90 the highest in his Premier League career.

To this point we’ve focused mostly on individual players. Perhaps even weirder has been the wide swing in team performances. For example, in the four early losses the side looked helpless and outclassed, in the three following matches confident and strong.

But that was nothing compared to their adventures later on. After the stirring win against Southampton, they had won five of six and were rolling. Then they travelled to Burnley, and got absolutely crushed. No disrespect, but Burnley aren’t in the habit of crushing. It was easily the Clarets’ highest Premier League xG total in a single match, and their highest xG single-match margin. That even includes their 4-0 win this year over Bournemouth.

Okay, maybe one fluke. Those things happen, if not often. What then can you say about last weekend? After only one loss in five, and that a brave effort against Manchester City, the Hammers went to Cardiff…and got crushed again, even worse. At the hour mark they had been outshot 14-2. You guessed it, the Bluebirds posted their highest xG of the season and highest xG margin, both by light years. I simply can’t recall a decent side being so thoroughly thumped by two relegation candidates.

‘Decent’ is exactly the word for it, too. All the weirdness has paradoxically resulted in a classic mid-table season. For the last 15 weeks, they’ve never been above ninth or below 12th. That’s even though Burnley and Cardiff bookended six away matches in which West Ham scored only one goal. From a penalty. Speaking to the press after the Cardiff mauling, Pellegrini said: “It’s not normal. We need to talk to the players during the week.” No duh. But they’re two places higher in the table now than they were after the Burnley match. Weird.

I suspect the fans will take it, though. Percentage-wise, West Ham are the most improved club in the league from last season. They finally seem to have a direction, with the owners spending real money on players and an accomplished manager as well. And wonder of wonders, the London Stadium has become, if not a fortress, at least a pillbox, where they’ve lost only once in their last eight. Europe may be a bit out of reach this season, but their two recent forays on the continent were disasters, and home cooking will do just fine for a while.

This Saturday? West Ham are home to Huddersfield. A straightforward win, you’d figure. But what odds an Arnautovic hat-trick or a Nasri masterclass, or an Andy Carroll goal from outside the area (six years and more than 50 attempts since the last)? This year, all things are possible. Except one: a supporters’ banner praising the owners. That would be just too weird.