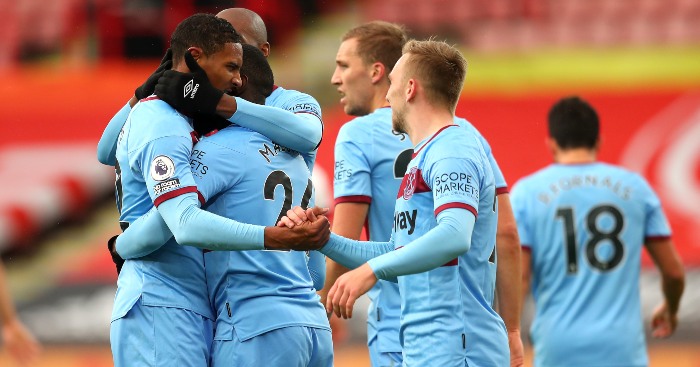 Maybe you thought Leicester would continue their downward trajectory from the end of last season. Maybe you were unconvinced that James Rodriguez could swiftly make the transition to key man at aspirational mid-table club in a new and difficult league after years of stagnation. Maybe you thought Spurs were a bit lucky to scramble up to sixth last season and would get found out big time this year.

Or maybe like me you thought all of those stupid wrongheaded things and only very slightly redeemed yourself by telling anyone who’d listen that Liverpool would win the league again “while spinning on their cocks”.

But West Ham are the one I got really wrong. Frankly, I thought they would be sh*t. Miserably, drearily, never-quite-in-danger-of-getting-relegated-but-nevertheless-lifeforce-sappingly sh*t.

West Ham, though, are not sh*t. The stadium is. The owners are. The jury is kind of still out on the manager. But the team are quite good really, aren’t they?

No other team has improved so markedly this season on the equivalent fixtures last season. That’s significant, because West Ham are already in a solid enough league position. But that position is, if anything, an artificially low one. When the stagger unwinds and everyone has played everyone, things should be looking even better for the Hammers. Obviously, there’s no guarantee of this because we’re talking about West Ham, a club with a penchant for self-inflicted catastrophe that makes Spursiness look like sweet summer rain.

Right now it all looks good, though. There was the 3-3 draw at Spurs, of course. Now it’s easy and fun and correct to focus on the late comeback, but that match bears a repeat watching. It wasn’t the one-way Spurs demolition job until late hilarity of popular conscious. In terms of possession, territory and chances – everything, really, apart from the score for most of the match – West Ham matched Spurs. Even as Spurs roared into that seemingly decisive early lead, their three goals were interspersed with decent chances at the other end. Spurs are playing completely differently since that game, and it’s not just a response to the mad 10 minutes at the end.

West Ham were dreadful in their opening-day defeat to Newcastle, then desperately unlucky to lose to Arsenal the following weekend. Since then, their only defeat has come at Liverpool – and that took an 85th-minute Diogo Jota winner. They’ve thrashed Wolves and Leicester and drawn with Manchester City.

Since then, perhaps most importantly of all, they’ve just about avoided West Hamming all that good work down the toilet thanks to a couple of narrow wins over relegation’s Fulham and second-season syndrome’s Sheffield United.

They’ve now got a nice-looking run of games against teams just like them; mid-table sides with growing ideas that they could achieve something better than that. Aston Villa. Manchester United. Leeds. Crystal Palace.

If West Ham can stay out of their own way, there’s no reason to fear any of those games. And this West Ham does look capable of it. The Spurs game is an outlier in every way; they’ve generally looked solid. Spurs themselves are the only side to have conceded fewer goals this season, and the partnership between Tomas Soucek and Declan Rice in the centre of midfield provides both defensive solidity and a platform from which to launch attacks.

And without descending too far into cheap banters, you do wonder just how much they are weirdly benefitting from being the club least affected by the absence of crowds. It’s not West Ham fans’ fault – and it certainly wasn’t the case back in the Upton Park days – but the London Stadium was already the most sterile and least atmospheric ground in the division. It’s worse still without fans, but the difference is less marked here than anywhere else. It certainly isn’t hurting them anyway.

With hindsight, the signs were there at the back end of last season. Among the novelty and the weirdness of Premier League football in June and July with empty stands, West Ham’s tidy finish to the season and safe passage clear of relegation flirtation was easy to overlook. There was just so much going on elsewhere.

But the Hammers lost only one of their last seven games of the season, beating Chelsea and drawing at Old Trafford along the way. Maybe we should have seen this coming. But then there was another vaguely dispiriting summer and further reminders about the awfulness of those who run the club and that flourish in which almost a third of their total points for the season came in that frantic July finale were forgotten once again.

Not now, though. The Hammers are on the rise, and we’ve managed to get through this whole piece without a single satirically topical reference to bubbles. That obviously couldn’t last, but West Ham’s renaissance just might.