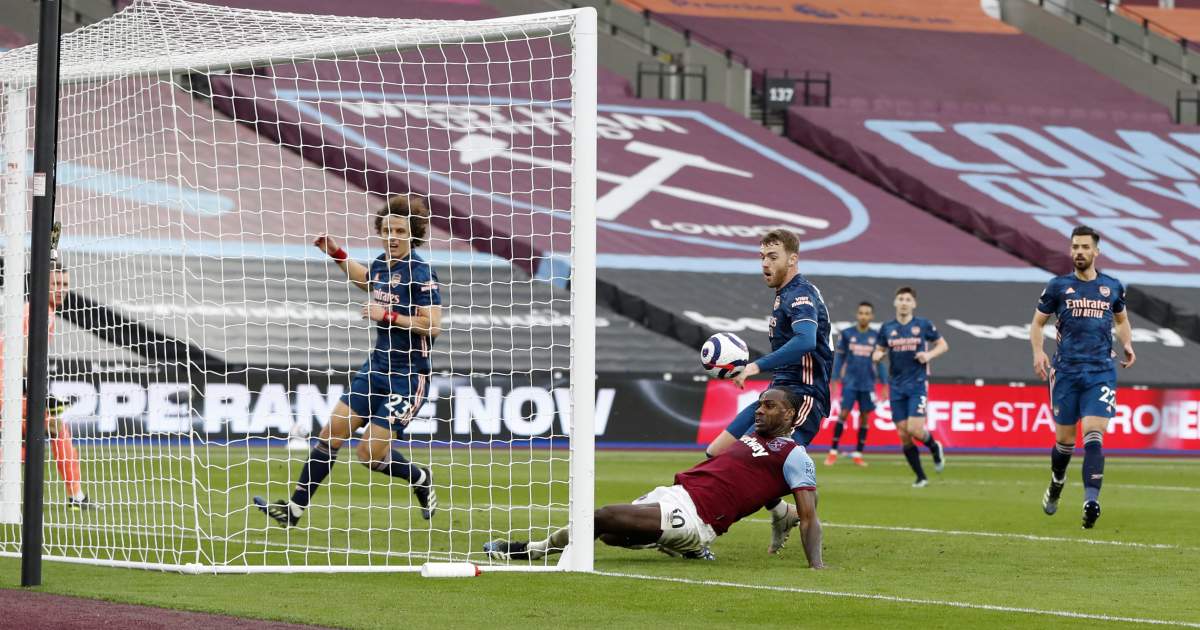 This has been, at times, a truly exhausting season of football. It’s been the shortest yet longest season imaginable, the games crammed in to a shortened calendar but taking place across wildly extended weekends with the 3pm Saturday kick-off never more endangered and whole new kick-off times constructed.

The overall quality has very often been spectacularly mediocre. That’s not always really anyone’s fault in particular. It’s just the reality of a season unlike any other played out in front of vast, echoing empty stadiums with the New Normal never entirely out of anyone’s mind.

But that doesn’t mean it can’t be fun, though. Sometimes bad football – especially if there’s just enough good in among it to really highlight and punish the bad – can be the very ideal recipe.

And so to the London Stadium, and a 3-3 draw that was absurdly and wondrously entertaining. Was it actually a good game? Dunno. Does that matter? Probably not. It was great fun, and maybe that’s what we all need. An entire 90 minutes dedicated to what was previously believed to be a purely hypothetical thought experiment: “What would happen if Tottenham played Tottenham?”

Well, now we know. It would be very, very silly indeed and involve two teams that Spurs fans absolutely hate. Which only makes it more accurate, if anything.

The first half-hour was a masterclass in being your own worst enemy as Arsenal’s own-worst-enemy defence collapsed entirely in on itself. But my word West Ham were good. Jesse Lingard is a man reborn and looked sure to be the main story having delightfully scored the first goal with the confident swerving finish of a man loving life again and then ingeniously created the second barely a minute later when he and Jarrod Bowen were the only two men not to immediately switch off at the award of a free-kick. Not sure even Spurs have conceded a goal so silly or scored one so clever this season. Is it perhaps possible that this match was even better entertainment than Spurs v Spurs might have been?

The third goal was the first of two crucial Tomas Soucek deflections, the first intentional to divert Antonio’s header inside rather than outside the post, the second unintentionally doing the same to Alexandre Lacazette’s sliced effort. It was here that you really started to sense something special. West Ham, having carved Arsenal to ribbons, spent the rest of the first half in a panic. The defence sat deeper and deeper, yet with the midfield staying where they were, huge gaps developed for Arsenal’s schemers to exploit, instantly nullifying the usual steadying effect of the Soucek-Rice axis. West Ham got to the break without further damage – just – but the stage was set for a second-half Arsenal onslaught.

David Moyes’ second-half solution to this gaping chasm between defence and midfield was to pull the midfield closer to the defence, playing right into Arsenal’s hands. A second own goal gave Arsenal heart, and the equaliser never felt far away from that moment.

Obviously, because both these teams were larping as Spurs – a barb that neither side will enjoy and that is precisely why it is so apt – there was a chance for West Ham to go 4-2 up that Antonio, at full stretch, could only divert onto the post as Arsenal’s defence all went missing at precisely the same moment. Any lingering doubt that Arsenal were getting themselves an equaliser was gone in that moment.

To complete the Spursiness, the end result is one that does nobody any favours. Arsenal have given themselves so much to do in the home straight of this season that single points won’t do, while West Ham’s unlikely Champions League pursuit will require wins in these games – even before going 3-0 up – if resurgent Chelsea are to be repelled.

Do Arsenal enjoy the impressiveness of the comeback or curse the foolishness of that opening half-hour? Either? Neither?

Fittingly, the commentary team spent the closing minutes after Lacazette’s thumping header brought the scores level trying to decide whether this was a point Moyes would now willingly settle for given Arsenal’s total dominance, or whether this was in fact a draw that would feel like a defeat.

The full, Spursy truth? It was both. At the end of a silly and enormously fun 90 minutes of classic Barclays, nobody was truly happy. Marvellous.