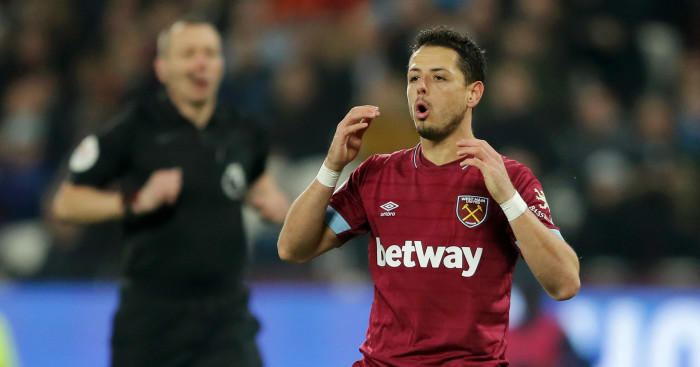 West Ham boss Manuel Pellegrini is set to keep faith with Javier Hernandez at Cardiff on Saturday after praising the striker’s recent contribution.

Mexico international Hernandez has at times cut a frustrated figure since moving to the London Stadium for £16million in July 2017.

Struggling for game time under both Pellegrini and previous manager David Moyes, Hernandez was heavily linked with a switch to Spain in January.

But that move did not materialise and Hernandez has started four of West Ham’s last five matches, helping his side pick up wins over Fulham and Newcastle and draws with Liverpool and Crystal Palace.

Goals have been hard to come by, his only one this year arriving via a controversial handball against Fulham, but nevertheless Pellegrini has been impressed with the 30-year-old’s impact.

“I’ve been very pleased,” said Pellegrini. “Javier is in a good moment, he is committed to the team, he is making good movements in attacking.

“Maybe, as all strikers, they want to score more goals but he is always involved in plays that allow us to score.

“We also have Marko Arnautovic coming back so we have options for the starting XI and also for the bench.”

Hernandez’s form has delayed Arnautovic’s reintegration into the first team following his flirtation with China during the transfer window.

The Austrian forward has started just one match since agreeing a new contract in January, and is set to be on the bench again at Cardiff.

However, Pellegrini is happy to have some rare selection dilemmas towards the end of a season which has seen as many as 10 first-teamers out injured at the same time.

“I always say that for a manager it is more difficult when you don’t have players,” he added.

“Maybe one of them for different reasons must wait, or they can play both together, but having good options is a solution for me, not a problem.”

Pellegrini can welcome back Paraguayan centre-half Fabian Balbuena, who has been sidelined since December with a knee injury.