Home All The News West Ham 1-0 Burnley: Antonio goal proves to be the difference 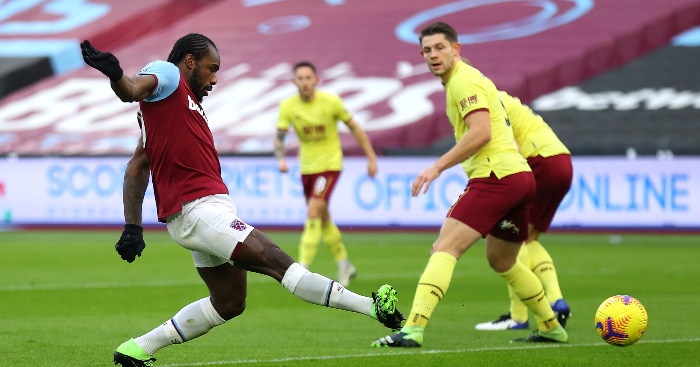 Michail Antonio returned to goalscoring form as West Ham edged closer to the top six with a 1-0 victory over Burnley.

The upwardly-mobile Hammers made it back-to-back Premier League wins and are now unbeaten in five matches in all competitions thanks to Antonio’s early strike.

Boss David Moyes is expected to splash out on a striker this month following the sale of record signing Sebastien Haller to Ajax.

But Antonio showed why he remains West Ham’s main man up front, if he can stay fit, with his fourth goal of the season and his first since October following an injury.

He found the net in the ninth minute with West Ham’s first attack of the match, after Said Benrahma’s ball had sent Jarrod Bowen through.

Bowen reached the byline before playing the ball back to Pablo Fornals, who crossed into the area.

The ball grazed the head of Clarets defender Ben Mee, forcing James Tarkowski to miss his header and leave Antonio with a tap-in at the far post.

The 30-year-old embarked on one of his trademark bizarre celebrations, performing the backstroke by the corner flag.

And it was Burnley who were swimming against the tide throughout the rest of a lacklustre first half.

They briefly thought they had equalised when an Ashley Barnes cross was diverted into his own net by Aaron Cresswell, but the Burnley forward was pulled up for offside.

Moments later West Ham almost doubled their lead, with Rice flicking on Bowen’s corner to Angelo Ogbonna, who headed against a post.

Hammers keeper Lukasz Fabianski, himself just back from a thigh injury, dealt with a couple of Johann Berg Gudmundsson shots but Burnley offered little threat before the interval.

Early in the second half Rice went close with an audacious angled free-kick which flew narrowly over and Fornals’ goal-bound shot was blocked.

Rice then fed Bowen, who raced clear of Dwight McNeil but buried his shot into the side-netting.

Burnley have only scored four goals on the road this season so their prospects of an equaliser looked thin.

They threatened one when Mee headed Robbie Brady’s ball wide, and came even closer when McNeil’s cross looped over Fabianski and grazed the crossbar.

But West Ham are made of sterner stuff under Moyes these days and they held on for a third successive 1-0 win since the turn of the year.

Michail Antonio
Your browser is out-of-date!