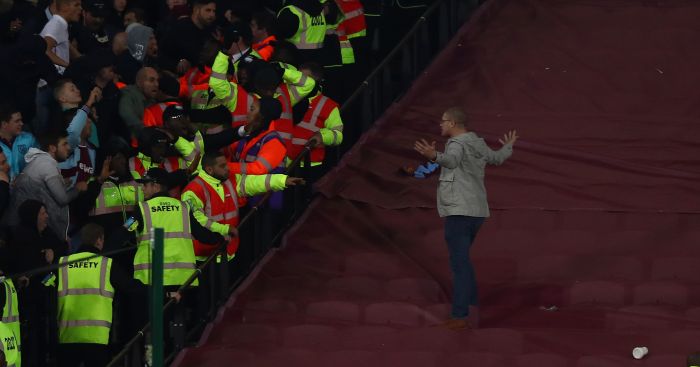 West Ham vice-chairman Karren Brady has been forced to defend the London Stadium’s suitability as a football venue.

Brady, the stadium operators and the Metropolitan Police on Thursday morning faced a two-hour grilling from the London Assembly Police and Crime Committee following the crowd trouble at the ground this season.

West Ham’s move from Upton Park to the former Olympic Stadium has been marred by violence in the stands, most notably at the recent EFL Cup match against derby rivals Chelsea.

But while Brady admitted there have been some “teething problems” at the club’s new home, she called for some “perspective” into the disorder.

Commander BJ Harrington, of the Metropolitan Police, revealed there were six arrests at the Chelsea match and 18 in total at the stadium this season – nine of whom were West Ham supporters.

Some fans were arrested after CCTV footage was reviewed, bringing the total to 27. There have been 71 banning orders, although some of those have been successfully appealed due to cases of mistaken identity.

Brady said: “We are coming up to the halfway point of season and there have been 18 arrests at matches. At Arsenal last season there were 60, and at Manchester United there were 57.

“At an Aston Villa match recently there were 14 arrests.

“We have had teething problems and accept that any disorder is disruptive, but we want to put some sort of perspective on it.

“We have taken strong and decisive action and we are adamant that we want to eradicate the problems.

“The majority of West Ham supporters are passionate and well behaved. We are talking about a very small minority which we have successfully identified and banned.”

Some have blamed the trouble on the large concourses in the stadium where flashpoints – such as at the Chelsea match – can occur, while the large open spaces of the Olympic Park make segregation of fans difficult

But Brady said: “The stadium itself is a designated UEFA category four stadium, the highest possible status a stadium can be granted.

“It can host a Champions League final, so it is absolutely suitable for football.”

Commander Harrington also insisted the levels of disorder are not out of the ordinary when compared with other clubs.

“It’s a new stadium, newly used for football, and a minority are exploiting it,” he said.

“There are multi-entrance points, transport hubs, and all these things spectators are learning.

“Most stadia in London have natural segregation; streets, buildings etc. A large space is very hard to segregate because there are no natural barriers.

“Plus it’s still a novelty to come to the London Stadium and people are coming to cause disorder.

“Whilst still unacceptable the disorder, in comparison with other areas in London, has not been not significant except at the Chelsea game. There have been seven matches (out of 11) with no disorder reported.”