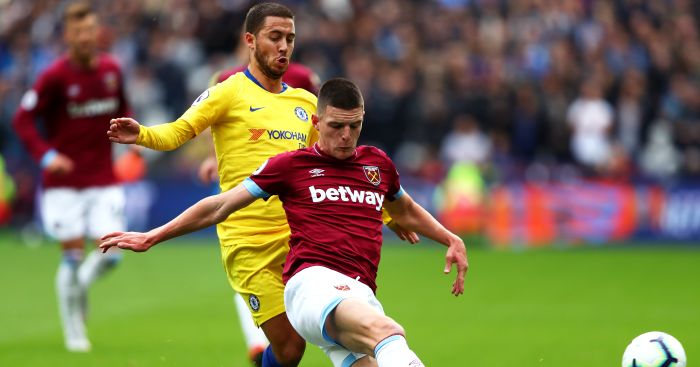 West Ham have complained to TalkSport over Danny Murphy’s comments about Declan Rice’s contract situation, according to reports.

Rice has made three Premier League starts this season and is now an essential player in Manuel Pellegrini’s Hammers squad.

The Republic of Ireland international has reportedly turned down a new deal worth £15,000-a-week plus lucrative appearance bonuses with most of West Ham’s squad understood to be earning a lot more money.

It is thought he earns £3,000-a-week currently and that his representatives are looking for a wage offer in the region of £30,000-a-week from the Hammers.

Murphy appeared on Jim White’s radio show on TalkSport on Monday and criticised West Ham’s handling of contract negotiations with Rice as well as warning the club that they could lose their young star.

The Guardian reports that the Hammers have complained to TalkSport as Rice’s agent, Neil Fewings, has also represented Murphy and the club think the former Liverpool midfielder should have made this known.

“Why haven’t they sorted it? This lad hasn’t just come into the first team, he’s been around since last season.

“This is typical of lots of clubs who forget to reward young lads when they’re doing really well – and I don’t mean stupid money, I don’t agree with young lads who aren’t in the first team earning £20,000 a week.

“But he is on a very low contract, playing at the top level, dealing with some top players and looking very, very accomplished. All of a sudden he’s only got next season on his contract and what, West Ham think the big clubs aren’t watching him now?

“I’m amazed at West Ham, it’s ridiculous for a lad of this talent. It shouldn’t have got to this. You can’t let this happen.

“They’ve got a problem now after his last couple of performances. They’ve got a super young player who they haven’t looked after and dealt with. Hopefully they deal with it soon.

“He’s probably very happy there and wants to stay, but they have to act quickly because his performances now are taking him to a different level.”

The report continues by saying that West Ham are keen not to give Rice ‘too much too young’ with his next contract.