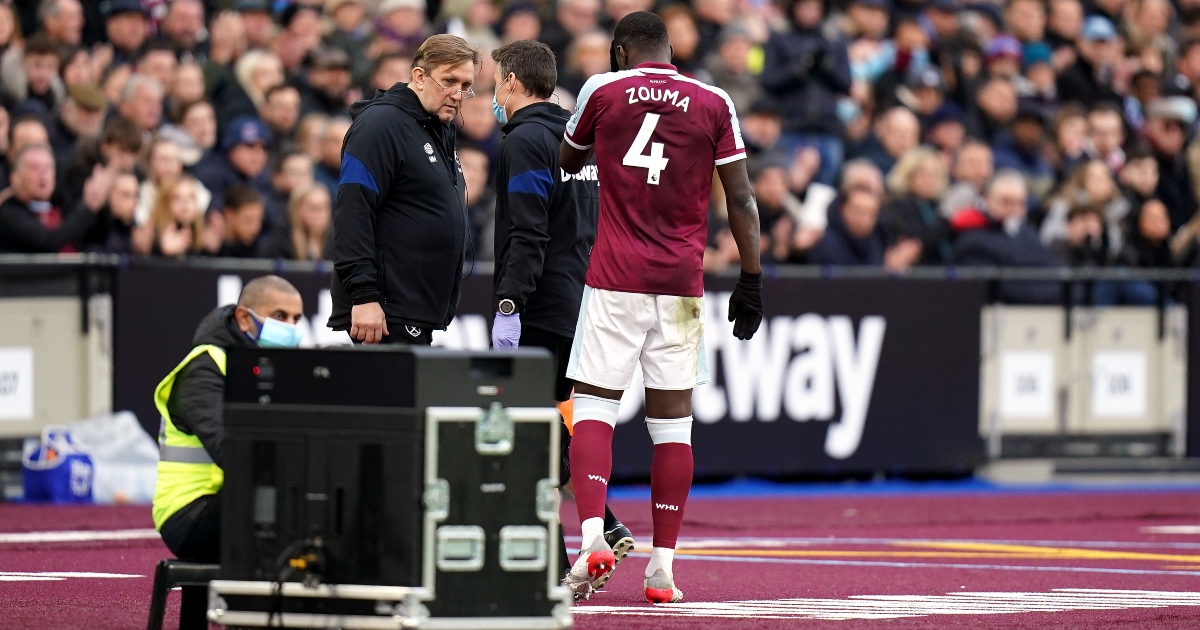 West Ham defender Kurt Zouma is facing a lengthy spell on the sidelines after sustaining a hamstring tendon injury in Saturday’s 3-2 win over Chelsea.

A timeline for the France centre-back’s return has not been revealed, with the club only confirming that he has started his rehabilitation.

The 27-year-old pulled up against Chelsea in the second half and was forced to come off despite initially continuing with play.

“A scan on Monday revealed the damage and the 27-year-old French international defender has already started his recovery programme at Rush Green under the supervision of the medical team.”

Zouma has been terrific for the Irons since his £30million move from Chelsea in August.

The ex-Everton loanee made his Premier League debut for the east Londoners in their 2-1 home defeat to Manchester United. Between then and his substitution against Chelsea, Zouma had played every minute in the league under David Moyes.

The Hammers also confirmed that defender Ben Johnson has suffered a “low-grade hamstring injury”. He will likely return in January.

Moyes’ centre-back options are now Issa Diop and Craig Dawson following the injury to Zouma, with Angelo Ogbonna already ruled out for the season.

Should be pointed out that West Ham went a long time playing Diop and Dawson together at centre-back at the end of last season. It wasn’t a disaster and they maintained the top four push. But it’s a step down from Zouma and Ogbonna, plus so many games coming #whufc

Declan Rice is another option for the Scot, but he will be reluctant to lose the England international’s influence in midfield.

January recruitments in defence could be necessary as West Ham continue to push for a top-four finish this season.

One player being linked with a move to the London Stadium is Liverpool’s Nat Phillips.

“Phillips has got more chance of leaving than Gomez has, that’s for sure.

“I still think a deal will be difficult to do though given the injury crisis Liverpool had last season.

“Phillips was brilliant at the end of last season but whether he is of the same level as Zouma and Ogbonna, I would question that.

“It’s an area that Moyes probably need to address though.”