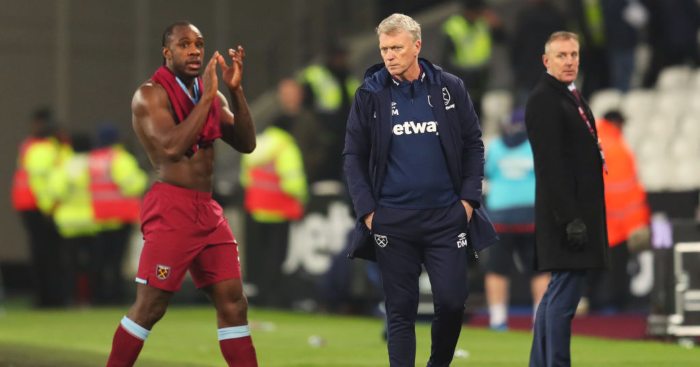 David Moyes pulled no punches after his West Ham side were dumped out of the FA Cup by West Brom.

Conor Townsend’s early goal condemned the hosts to a 1-0 defeat as Albion manager Slaven Bilic, sacked by the Hammers in 2017, came back to haunt his old club.

Gallingly for West Ham, this was pretty much their strongest available line-up while Bilic made eight changes to his, with the Croatian’s priority lying with the Championship promotion race.

Not only that, but Albion also played the final 18 minutes with 10 men after Semi Ajayi was sent off for a second booking.

Moyes made three substitutions at half-time and said: “I would have made a couple more if I was allowed to!

“We were passing the ball away, kicking it out of the pitch. I think it got better but we weren’t able to manufacture anything clear cut.

“It definitely wasn’t a lack of effort. The players were determined to do well. We just didn’t show good quality. We pushed, but that was about all we did.

“It was pretty much a West Ham first team today. We did everything we could to get through, I wanted to give the supporters a cup run.

“You see it a lot in cup ties, a lot of upsets, some much bigger than this. But we had to play better and we didn’t play better.”

Among those drafted in by Bilic were experienced campaigners Charlie Austin, Chris Brunt and Gareth Barry, an FA Cup winner nine years ago with Manchester City.

Barry and Brunt may have a combined age of 73 but they were more mobile than anyone in the West Ham’s plodding midfield.

The rest of the Baggies line-up had pace, tempo, intensity and a clear game plan, all of which were lacking from the Premier League side.

Their goal arrived in the ninth minute after a carefree 40-yard run from Filip Krovinovic led to a mix-up between Issa Diop and Carlos Sanchez and saw the ball fall at the feet of Townsend.

They squandered chances to go further ahead and West Ham almost snatched a replay when Mark Noble blazed over from 12 yards in stoppage time.

The Hammers did not deserve a draw, however, and Bilic said: “I’m happy, very pleased with the result and even more with performance.

“We were positive from the start, we were brave, we kept the ball really well.

“I said at half-time the only thing I wasn’t happy about was the score, we were winning but we should have been more up.

“After the red card we had to defend well and we did defend well. We limited them to maybe one chance with Mark at the end of the game. We deserved it big time I think.”