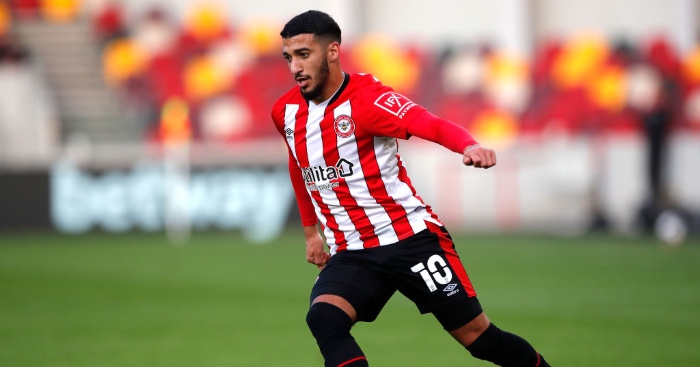 West Ham United manager David Moyes has suggested that he will wait for the ‘right time’ to bring Said Benrahma into the team.

The forward has been one of the leading players in the Championship over the last couple seasons. Benrahma joined the London outfit in 2018 and he immediately hit the ground running.

He was involved in 28 goals from his 38 outings during his debut campaign. The attacker scored ten goals that season, but in his second year, he upped that as he netted 17 times.

The 25-year-old spearheaded Brentford’s push for promotion in 2019/20. But they fell short in the play-off final, losing 2-1 to Fulham at Wembley.

He was one of the most sought after talents in the Championship this summer. Chelsea, Tottenham and Everton were all linked with him. Yet he eventually opted to join West Ham.

The two clubs had reportedly agreed on a £25m deal for Benrahma. This deal changed at the last minute to a loan, but the transfer still went through during the domestic deadline day.

Moyes was quoted in The Evening Standard saying that Benrahma is progressing well, but they will not rush into giving him his Hammers debut:

“Said’s doing well. I think he’s needing to get up to speed with what we want and where we are. The way the players are playing, it’s given me that opportunity to get a bit more time with him.

“Like I always say, with the boys I bring in from the Championship, I’m not in a great rush to put them in the team.

“I want to give them opportunities, but I want to do it at the right time, when I think it’s best for them. There’s a difference in that Mahrez came from the champions in Leicester, and we’re bringing Said from the Championship.

“We’re bringing him on and developing him and looking to see if he can step up to the levels required.

“But what I’ve seen at the moment is good signs. We’re trying to get him a little quicker, a little more ready for the Premier League.

“I’ve done it with a lot of Championship players over the years, so I’ll take my time, bring him on when I’m ready and, hopefully, get him in the right condition to start and play well when he does.”