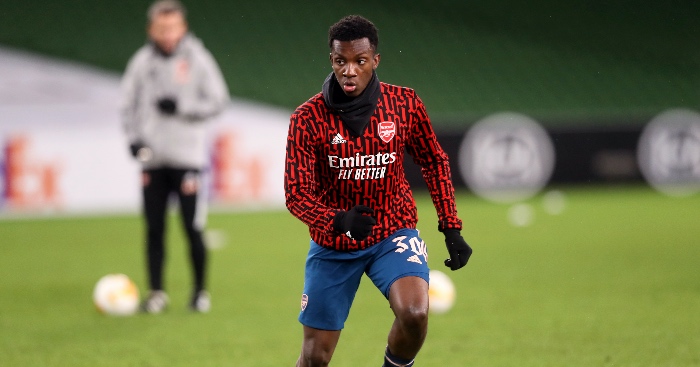 FEATURE: No sympathy for Klopp as Liverpool beat courageous Villa

According to the Evening Standard, they’re targeting England U21 international Nketiah.

The report states that West Ham are open to the possibility of either a loan or permanent move.

The player is now entering the final 18 months of his contract, which means the Gunners could cash-in.

If they see Nketiah as a future starter in the first team, then West Ham might have to settle for a loan deal.

The 21-year-old has scored just one Premier League goal so far this campaign, despite appearing 12 times.

He’s been more prolific in cup competitions. He netted three times during the Europa League group stage as Arsenal qualified in first place.

Nketiah is currently behind the likes of Pierre-Emerick Aubameyang and Alexandre Lacazette in the pecking order. He also has to compete with Folarin Balogun going forward, who is nearing the end of a contract himself.

Nketiah isn’t the only striker that West Ham are monitoring.

We’ve already suggested how their January hunt to replace Haller could go.

The Norwegian’s contract expires in June, so he could be available for just £15 million this month.

Chelsea target man Olivier Giroud is another option. The 34-year-old looks like he could leave Stamford Bridge at the end of this season.

He wouldn’t be a long term solution for David Moyes, but Giroud would certainly provide them with attacking threat.

The France international has scored nine goals this campaign, including four against Sevilla.