Home F365 Features For once, Hammers dreams might not fade and die 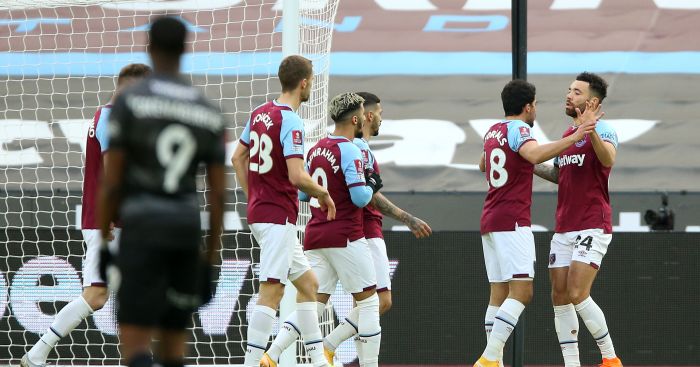 West Ham are in serious danger of becoming a very good football team. You can caveat an FA Cup game any way you like these days, but the Hammers were ruthlessly excellent in their dismantling of Doncaster.

Here was a clear example of how a change in personnel for cup games may well be inevitable – this season above all others – but a change of mindset is optional. While Arsenal bizarrely let their FA Cup defence end with little more than a whimper at a strong Southampton side, the Hammers were right at it from the very first minute. The early goal is always a massive help in that regard, but West Ham carried on with the exact same intensity and mentality for the rest of the game, never once giving a decent League One side in Doncaster any hint of encouragement.

There are four words that might just temper the excitement that must be growing among West Ham fans: “Manchester United or Liverpool.” That is the task that faces them next and, newsflash, it’s a much bigger one than this one was.

But West Ham should fear neither team. Not this season, and not in this kind of form. David Moyes’ side have now won five out of five in all competitions this year and, with whoever their next opponents in this competition are certain to be trying to balance priorities both domestic and European by the time the fifth-round clash is played, there is no reason to think the Hammers’ task is an impossible one.

Certainly, they didn’t approach this game like a side that doesn’t see a future for them in this competition. West Ham are a distinctly un-West Ham side under Moyes right now. The attacking flair is still there but built on a rock-solid base. They have become a tough side and possess a squad deep enough to make the sort of changes seen today while still getting the job done with the very minimal quantity of fuss against opponents who had won seven of their last eight coming in to this one and taken care of Championship side Blackburn away from home in round three.

This is precisely the sort of fixture where you would generally fear for a much-changed West Ham team. Opponents from two tiers down, yet full of confidence from winning games and sensing an opportunity. Even before Pablo Fornals opened the scoring so very early, this never felt like that kind of afternoon. You didn’t look down the fixture list and think “Hmm, potential upset there maybe?” Not with this Hammers side.

They were at Doncaster from the kick-off, with the superb Andriy Yarmolenko simply far too good for these lower-league opponents and scoring the second goal that removed any lingering doubts about the final result long before half-time with a deft finish lifted over the impressive 21-year-old Doncaster keeper Ellery Balcombe. An own goal from a wicked Mark Noble corner made it three before Moyes and West Ham finally showed any signs of relaxing. A flurry of substitutions followed, with Oladapo Afolayan rounding things off rather nicely with a goal on his Hammers debut.

And yes, the next round is going to be far tougher. But not since the clock ticked on to 90 minutes in the final of this competition 15 years ago have West Ham looked closer or more capable of ending a major trophy drought that now extends past 40 years.

It’s a season where anyone can dare to dream, and West Ham have as much reason as anyone else.