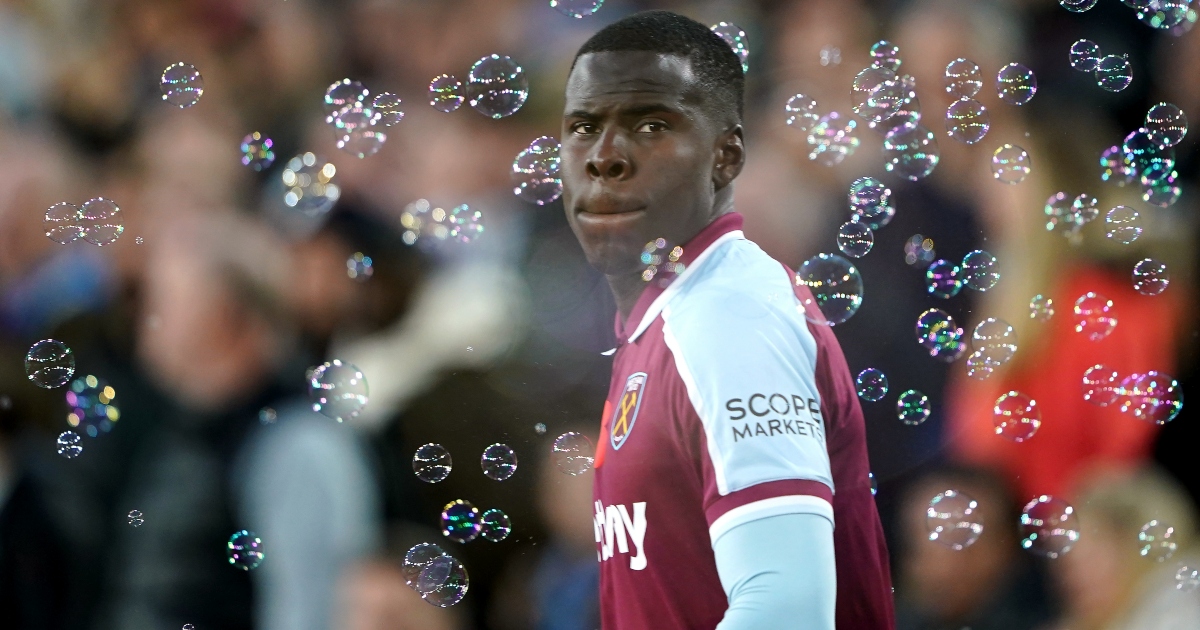 West Ham United defender Kurt Zouma is ‘well ahead of schedule’ in his recovery from a hamstring injury, according to reports.

The Frenchman was initially expected to return in February after he suffered the injury against Chelsea in December.

He joined his defensive partner Angelo Ogbonna on the sidelines, leaving David Moyes short in the centre-back department.

English football turned its dirty face to the sun this weekend…

The Hammers have been linked with numerous defenders – including Liverpool’s Nat Phillips – with their two starting centre-backs out.

They may not opt to sign a new central defender with the return of Zouma, who could feature against Manchester United on January 22, according to the Evening Standard.

The report adds that the 27-year-old could have returned sooner had he not tested positive for Covid-19 last week.

West Ham have only kept two clean sheets since Zouma’s injury, during the 0-0 draw at Burnley and Sunday’s 2-0 win against Leeds United in the FA Cup.

Kurt Zouma is set to return ahead of schedule from his hamstring injury and is eyeing the Manchester United trip for his return [@JackRosser_] pic.twitter.com/DWwWTRC0gh

Jarrod Bowen continued his fine form this season against the Whites, scoring the second goal to fire the Hammers into the fourth round of the competition.

The 25-year-old has also starred in West Ham’s successful Europa League group-stage campaign as well as their climb to the brink of the Champions League spots in the Premier League.

Bowen is now hoping Gareth Southgate has been taking notice of his performances ahead of the World Cup this year.

“I think this season was about progression and getting the call up for England is the ultimate dream,” he said after the win over Leeds.

“That is out of my hands, my job is to deliver on the pitch and show what I am about. That is all I can do, keep putting in the performances and the end product.”

Bowen is also looking to learn from Liverpool forward Mohamed Salah, who is the current Premier League top goalscorer this season.

He added: “I think Mo Salah is the perfect example, the goals he scores and assists he gets – the impact he has on games and consistently doing it every season since he joined Liverpool.

“He is definitely one that I look at and I think he is one of the best players in the world at the moment. As a player you always want to look at people in a similar position to yours and learn from them.”