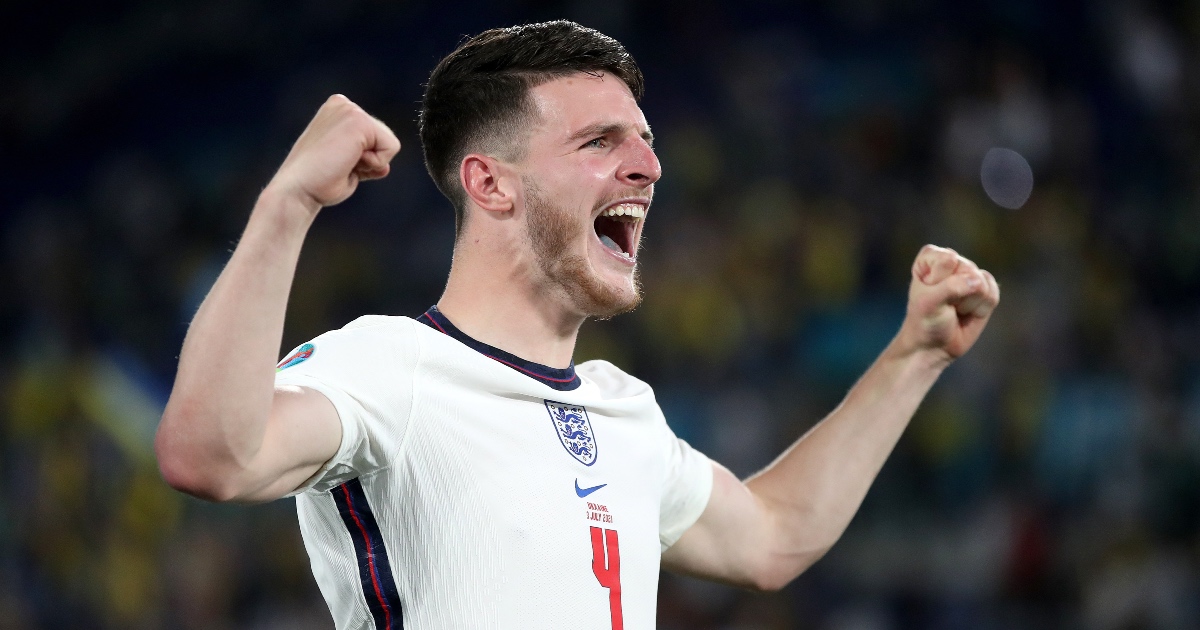 Chelsea and Manchester United target Declan Rice has been given an £80million price tag at West Ham, according to reports.

The midfielder appeared in all seven of England’s Euro 2020 matches before their defeat in the final to Italy.

He is now on a well-deserved break, but could be signed by one of the country’s biggest clubs in the coming months.

According to Eurosport, Chelsea or United will have to pay £80m to sign Rice from the Hammers this summer.

Such a fee would make him the second most expensive Englishman of all time, behind United defender Harry Maguire.

It would also put him above Jadon Sancho on the list. The 21-year-old winger has passed a medical ahead of his €85m (£72.6m) transfer to Old Trafford from Borussia Dortmund.

Rice came through Chelsea’s academy alongside Mason Mount before being released at age 14.

Their friendship is one of the main reasons for the Blues being continuously linked with a move.

Frank Lampard was a big fan of the 22-year-old during his time as Chelsea boss.

A transfer never materialised, although the club’s interest remains even with a new manager at the helm.

However, West Ham have plans of their own for their star midfielder.

The sale of Felipe Anderson to Lazio, three years after he made the move in the other direction, will give the Hammers extra funds that can be offered to Rice.

They will receive £5m for Anderson and will also be free of his weekly wages, which stand at £85,000 a week.

The majority of those wages can be used by West Ham to tie Rice down to fresh terms.

He’s already rejected two contract extensions as the salary seemingly didn’t represent his standing in the side.

West Ham won’t be forced to sell Rice, either. His current deal expires in June 2024 which gives them plenty of time to sort out a new one.

Alongside a new contract for Rice, West Ham are also pursuing a move for Baggies shot-stopper Sam Johnstone.

They had their opening bid for the 28-year-old rejected and could soon return with an improved offer.

A transfer would see Johnstone become the long-term replacement for Lukasz Fabianski, who is now 36.