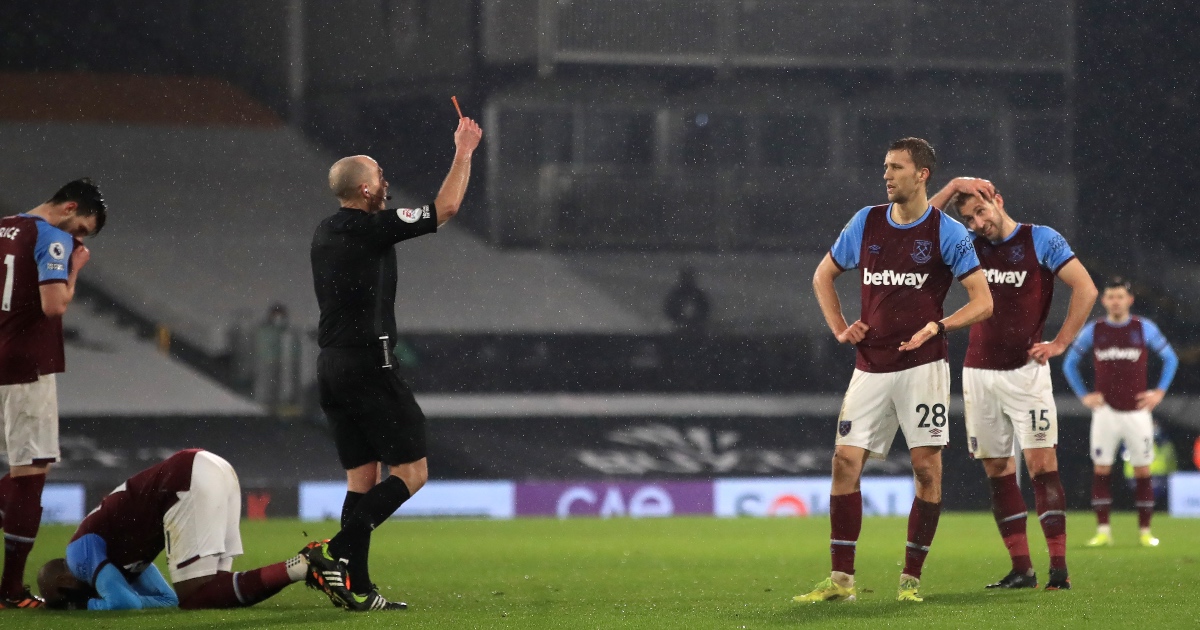 Tomas Soucek will be available for West Ham’s match against Man Utd tomorrow after his red card was overturned by an independent panel.

The Czech midfielder was sent off during the Hammers’ 0-0 draw with Fulham on Saturday.

He came into contact with striker Aleksander Mitrovic during the buildup to a West Ham free kick.

Referee Mike Dean was asked by VAR official Lee Mason to check the pitch side monitor during the game. He then decided to send Soucek off.

David Moyes’ side appealed the decision on Sunday. The manager said he was ’embarrassed’ for Dean in the aftermath.

On their website, West Ham revealed they were successful in the appeal.

A club statement said: ‘The appeal against Soucek’s red card was reviewed by an independent regulatory commission this morning at the Football Association and, following this process, the midfielder’s suspension has been rescinded and lifted with immediate effect.’

The 25-year-old was also set to miss Premier League matches against Sheff Utd and Spurs.

His return to the side is a big boost for West Ham. Soucek has scored an impressive eight league goals this term from 23 appearances.

The decision caused plenty of controversy amongst pundits and fans alike.

Former Liverpool defender Jamie Carragher said: “What is going on? That’s not a deliberate elbow!”

He also tweeted: “VAR has not helped officials, it’s making them look worse.”

Meanwhile, Sky Sports pundit Jamie Redknapp said: “What is happening to our game? We all love football, but when you see decisions like that… you can blame Mike Dean, VAR, whoever you want. What is he seeing there? He goes over to the screen and still decides to give him a red card.

“He’s tried to get his arm out of the way. Mitrovic has tried to grab him, and he lifts his arm to get it out of the way, and completely by accident he catches him. What is football coming to when we give that as a red card? Even the players can’t believe it.”