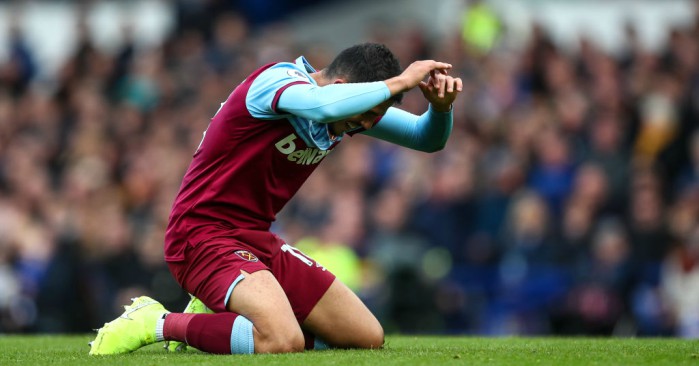 Only one Premier League team has lost their last two fixtures. And the same Premier League team has allowed the opposition the highest quality of chances this season, with xG figures suggesting West Ham should have conceded 18 goals rather than the mere 13 that have flown past Lukasz Fabianski and Roberto Jimenez. It’s worth noting at this juncture that Watford lost one game 8-0 and still, it is West Ham who are calculated to be the most generous with their chances. If there was any time for the naturally cautious Manuel Pellegrini to act decisively, it is now. To stumble blindly into the next fixtures with the same clutch of players that have sleepwalked through two defeats would be bordering on negligent.

“I chose to take off Felipe Anderson at half-time but if I’d been able to change 11 at that moment, I might have done,” said Pellegrini on Saturday after a wet tissue of a performance at Goodison Park, which would have enthusiastically turned on the Everton manager and players if given any sort of encouragement from the visitors. Instead, West Ham waved them through, gifting them comfort, confidence and then victory. The Chilean claims he would have made 11 changes at half-time, but will he make any changes at all ahead of this Saturday’s clash with Sheffield United in London? The fact that nine players have played over 70% of their Premier League minutes this season suggests he will be reluctant.

Among those outside that coterie are Andriy Yarmolenko, who is surely guaranteed a recall after being rested for the first half at Goodison only to see West Ham play so absurdly that he climbed off the bench at half-time. Jack Wilshere and Robert Snodgrass may also be wondering how they can be sitting out in the cold while Pablo Fornals takes longer than feels reasonable to adjust to English football and Manuel Lanzini drifts through games with the ease and effortlessness of a man who has recently signed a new £100,000-a-week contract and accepted that a thrice-mooted move to Liverpool will now never happen. West Ham’s supposed jewel did not create a single chance against either Crystal Palace or Everton.

You would think it impossible that West Ham could field all of Felipe Anderson, Fornals and Lanzini and yet still leave Sebastien Haller horribly isolated, chasing balls into the channels in pursuit of some kind of impact, but this West Ham side has achieved the seemingly impossible. Only three of the Frenchman’s 44 touches were in Everton’s penalty area, and his support acts managed only another three between them. This is not a team that is functioning in attack, which casts their traditional defensive flaws in a very unflattering light.

West Ham have become infuriating again. With at least four of the Big Six going backwards, Leicester have seen a gap and are desperately trying to wriggle through, defying all the statistics to score just enough goals to position themselves among the elite. Two teams that ended last season level on 52 points are now separated by five points, and those are an extra five points West Ham could have easily picked up in a kind run of fixtures against Bournemouth, Palace and Everton.

Instead, over £70m of attacking midfielders looked like hamstrung amateurs on Saturday, with only Anderson putting in any real defensive effort despite a loss of form. That effort at least earns him some credit with Hammers fans, who have long since tired of expecting the 2016 version of Lanzini to magically reappear. Meanwhile, Fornals has all the hallmarks of a traditional West Ham signing, with tracking back apparently optional. When the 32-year-old Snodgrass is being eyed as a potential saviour, you know that things have started to unravel.

So over to you, Manuel. Are the answers to be found on the training ground or on the bench? The one thing we do know is that something has to change.