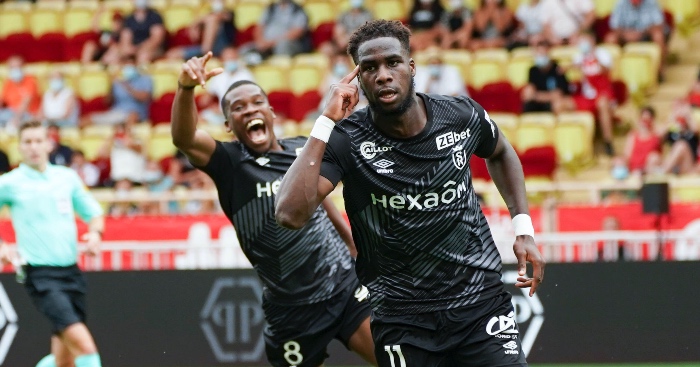 Reims striker Boulaye Dia is the latest player to be linked with a January move to West Ham.

They sold Sebastien Haller to Ajax earlier this month in a £20 million deal which has left them short of options.

Hammers chiefs now want to reinvest some of that money by signing an in-form striker.

FEATURE: Five academy graduates that would benefit from a January move

According to Sky Sports, West Ham see 24-year-old Dia as a potential target.

He is valued by Reims at around £10 million, meaning they wouldn’t have to break the bank to replace Haller.

Dia has a keen eye for goal and could be a hit in the Premier League, too. He’s bagged 12 goals in 17 league games this season.

That puts him joint top with Kylian Mbappe in the race for the Ligue 1 golden boot.

Dia is a Senegalese international who can also operate as a right winger. He’s scored 24 goals in 68 games for Reims since joining from lower league team Jura Sud in 2017.

The striker is now on a long list of players to be linked with a move to the London Stadium.

On Monday, reports emerged which put them in the race for Liverpool target Patson Daka. The Red Bull Salzburg man is also wanted by some of Europe’s top clubs, meaning West Ham could be priced out of a move.

A cheaper alternative is Graziano Pelle. The former Southampton attacker is a free agent after leaving Chinese side Shandong Luneng.

Selling Haller to Ajax for less than half of his initial fee is what started this transfer debacle.

When asked about the move, manager David Moyes said: “We got an offer we weren’t expecting, it certainly wasn’t planned to lose Seb [Haller] in this window.

“He has been great for us because he has won us a few games recently but I think it’s a really good move for him.

“It’s an offer that if maybe we didn’t (agree) now, it wouldn’t come up again so we just felt it was the right thing to do.

“We’ve now created room to bring players in – are we ready for that? Not really, but we’ll do what we can and bring in what we think are the right players.”