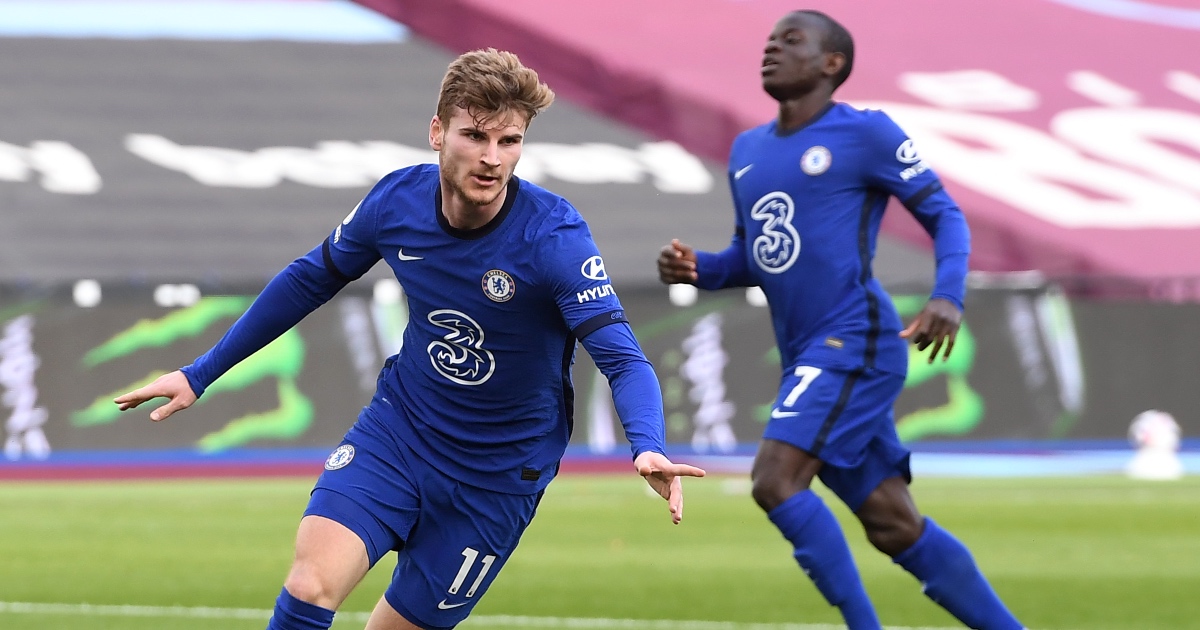 Chelsea edged ahead in the race for the top four with a 1-0 victory over fellow Champions League hopefuls West Ham.

A rare goal from Timo Werner, only his second in the league since November, saw the Blues move three points clear of their fifth-placed hosts.

It was hardly Super League stuff from Thomas Tuchel’s side, but they got the job done ahead of a genuine European showdown against Real Madrid on Tuesday night.

West Ham, who kicked off behind Chelsea on goal difference, had every reason to be affronted at the proposed breakaway league given that they were above four of the six clubs involved when it was announced.

They were feeling hard done by again when a late VAR decision saw defender Fabian Balbuena shown one of the most ludicrous red cards of the season.

Nevertheless a favourable run-in means we may not have seen the last of David Moyes’ boys in the Champions League mix.

Chelsea dominated early on and created three good chances in the opening 15 minutes, first when Mason Mount drifted into space down the right and laid the ball back to Werner, who scooped his first-time shot over.

Moments later Mount’s quick feet in the area took him past Tomas Soucek and Issa Diop but his low shot was held by Lukasz Fabianski.

Then Werner pulled the ball back for Christian Pulisic, unmarked, but he hurried his effort and fired straight at Fabianski.

West Ham’s best chance of the first half came in the 35th minute when Soucek pounced on a loose ball from a free-kick and prodded goalwards.

His effort was blocked on the line by Cesar Azpilicueta with VAR confirming, despite West Ham’s pleas, that the Blues skipper had not handled the ball.

Instead it was Chelsea who went in ahead at the break after Werner laid the ball off to Christian Pulisic and then raced into the box to receive Ben Chilwell’s low cross and convert from eight yards.

Werner should have doubled the lead shortly after half-time when Fabianski beat out a shot from Mount.

The ball fell to the German four yards out with the goal at his mercy but he somehow shanked his shot wide, to the disbelief of Tuchel.

Mount tested Fabianski again with a curler from the edge of the box and the Hammers’ keeper also saved well from Werner.

But West Ham were still in the match until, with eight minutes left, Balbuena cleared the ball and caught Chilwell on the calf.

Not a single Chelsea player complained and play continued, but VAR intervened and referee Chris Kavanagh dutifully trotted to the monitor before sending the Paraguayan defender off.

It virtually ended the match as a contest although Blues substitute Tammy Abraham missed the chance to mark his late appearance with a goal when he headed over in stoppage time.