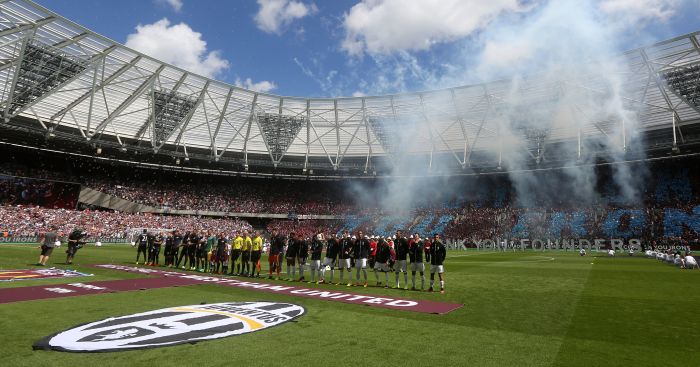 Andy Carroll scored his first goals at the London Stadium as West Ham officially opened their new home with a 3-2 friendly defeat to Juventus.

The Hammers may have already hosted their first game at the venue formerly known as the Olympic Stadium when they beat Slovenian minnows NK Domzale in a Europa League qualifier three days ago.

But their grand opening was reserved for the Italian champions and striker Carroll quickly looked at home in his new surroundings with two well-taken strikes.

However Italy striker Simone Zaza, a reported transfer target for the Hammers, secured victory for the visitors with six minutes left.

And during the match it was confirmed that the 23-year-old France international, on extended leave following Euro 2016, had been granted permission to undergo a medical ahead of a reported £100million switch to Old Trafford.

Nevertheless Juve were able to hand Gonzalo Higuain, their £75million signing from Napoli, a first appearance as a half-time substitute to soften the blow.

By then Juve had already found the net twice in three minutes, with Paulo Dybala opening the scoring and then teeing up Mario Mandzukic for the second.

West Ham’s defending was giving manager Slaven Bilic cause for concern ahead of next week’s Premier League opener at Chelsea, but they at least looked menacing in attack with Enner Valencia rattling a post before Carroll pulled one back.

Thank you @juventusfc for being part of our special day. Let's do this again soon! ⚒ #WHUJuve pic.twitter.com/S0FFdHR3Sw

Sam Byram’s cross was met by Carroll, whose header was superbly tipped onto a post by Gianluigi Buffon, but the striker was first to the loose ball to bundle it over the line.

After the break Carroll, who may have his sights set on an England recall this season with former Hammers boss Sam Allardyce now in charge, grabbed a trademark equaliser with a header from Mark Noble’s cross.

West Ham’s France star Dimitri Payet received the biggest cheer of the day upon his appearance as a substitute, but Zaza settled the match in Juve’s favour when he slotted home from the edge of the box.