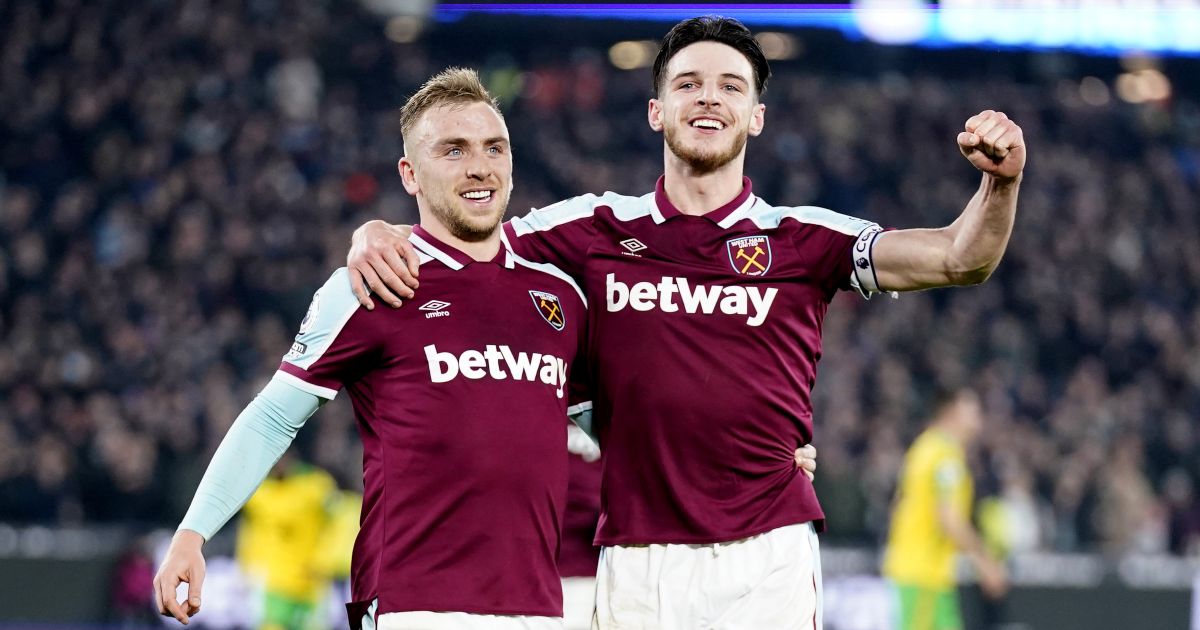 West Ham are lucky to still be in the hunt for Champions League qualification. It’s now or never for the ghost at the Big Six feast.

After consecutive Premier League defeats to Leeds and Manchester United, and just ten points taken from a possible 24, West Ham still sit fifth, one point behind United (who have a game in hand) and a point above Arsenal and Spurs (who have one and two games in hand respectively).

With those advantages, and the form and stature of those teams, the most likely scenario is for the Hammers to end the campaign in seventh – a place below their finish of last season – and usher in the slide to mid-table mediocrity.

Unlike the Big Six, transfer windows are something to be feared for West Ham. For those with endless cash reserves, great trophy-winning potential, or both, it’s a chance to improve their squad; for West Ham it’s more a case of damage control.

Declan Rice and Jarrod Bowen are the subject of transfer speculation at a level that suggests West Ham will be fortunate to have either of them at the club next season. Chelsea and Manchester United have both been courting Rice for some time and he’s turned down the offer of a lucrative new contact at the London Stadium. And it takes no great imagination to picture Jurgen Klopp ruffling Bowen’s hair after his first goal in front of The Kop – he’s about as Liverpool a signing as it’s possible to be.

West Ham’s hopes of keeping either or both likely rest on Champions League qualification. They must strike while those Irons remain in the fire.

David Moyes has overseen excellent business in the last two January windows to turn West Ham from relegation candidates to Champions League hopefuls. Bowen, Tomas Soucek and Jesse Lingard were all brought to the club, while Said Benrahma’s loan was made permanent. Moyes has said he again wants to add “a couple of players” to his squad this January, and a pair close to that calibre could be enough to keep pace with their qualification rivals.

Reports suggest Moyes wants to bring in a centre-back and a striker. Marseille’s Duje Caleta-Car seems to be their most coveted centre-back target, with the Ligue 1 side asking for £15m for the Croatian. The net appears to be wider in their search for a striker, with Bamba Dieng, also of Marseille, Blackburn’s Ben Brereton Diaz and Espanyol’s Raul De Tomas three of the players linked, all for between £20m and £30m.

They would likely be able to negotiate better deals in the summer, but this has to be the window to improve the squad. Wait and the players arriving won’t be additions but replacements, and will have to be persuaded to join a team likely to lose their two best players.

While the £120m-plus West Ham would receive through the sales of Bowen and Rice would give them the wherewithal to bring quality players to the club, Champions League football and the increased possibility of that duo staying as a result, would give them greater transfer potential than a bigger pot of cash. Quality players want to play with other quality players in the biggest competitions.

And then there are the other teams vying for the top four. Tottenham, if they manage to appease and keep Antonio Conte, will be a far greater force next season, as will Manchester United if they don’t completely balls up their next appointment, and six months and another transfer window could see a young Arsenal squad develop sufficiently to challenge at the top.

All three are on an upward trajectory, but are currently vulnerable. The question is whether West Ham have reached their peak or are able to take advantage of that vulnerability. With the added weight of Europa League football, the players have looked tired in recent weeks; the winter break came at the right time for them. But rest will likely not be enough for a squad in need of a cash injection to reinforce and invigorate.

Exciting and refreshing though Leicester and West Ham’s dalliances with the Premier League elite have been in the last two seasons, the top six is starting to look suspiciously Big Six-y. West Ham have a fantastic opportunity to escalate that disruption, an opportunity that will pass them by should the January window come and go without additions to augment the pair that will be playing Champions League football with or without them next season.