Home West Ham United What should West Ham do with their six old men? Is it time for David Moyes to make a cull? 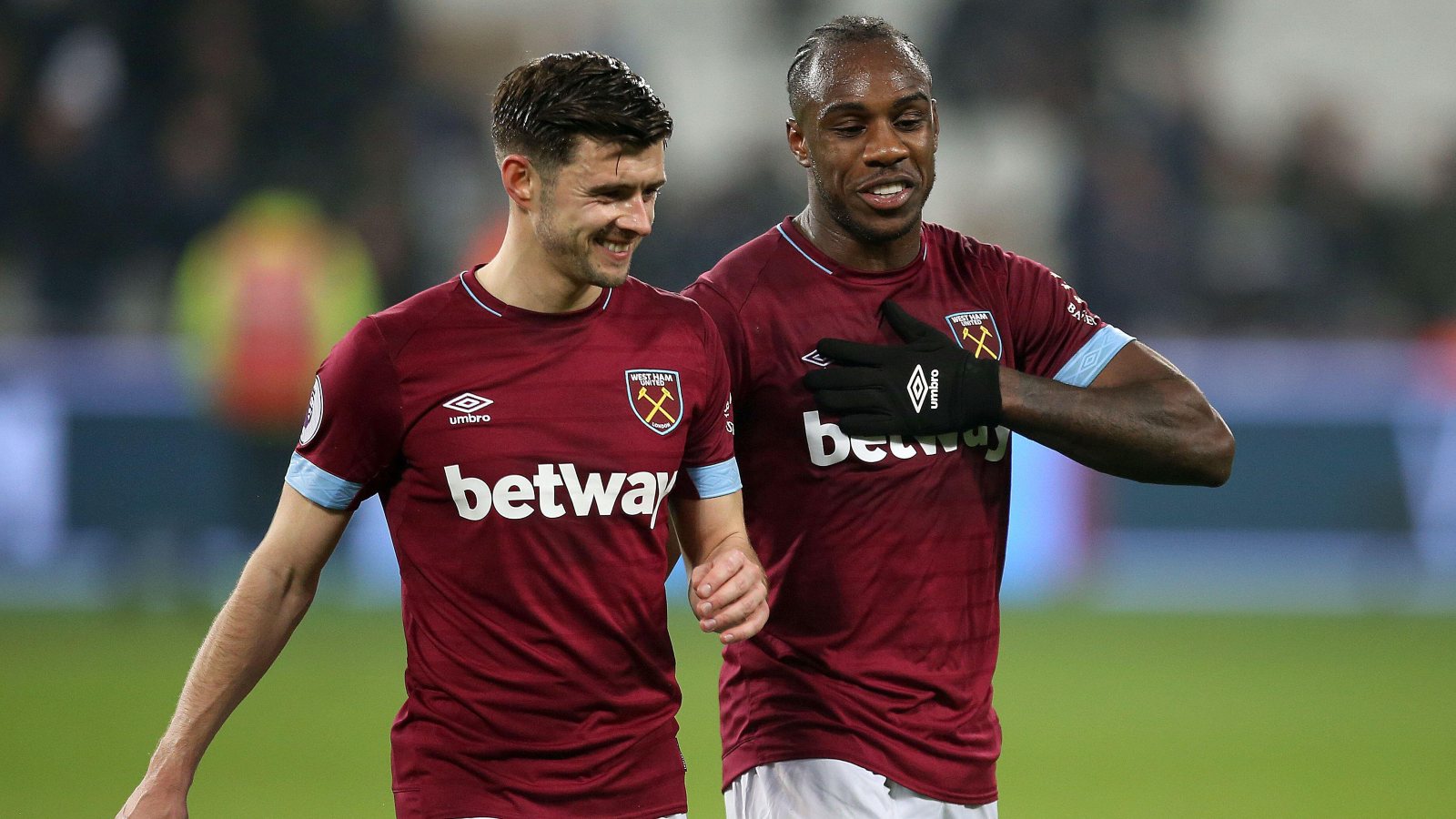 West Ham have been living in nose-bleed territory in the Premier League for a couple of seasons, and a lot of that success can be pinned on the senior pros at the club.

But as the squad transitions, and David Moyes takes an eternity to bed the new signings into the first team, it’s time for the older pros at the club to slide onto the bench or visit pastures new in the January window.

Despite a handful of new faces arriving at the club over the summer, David Moyes opted for a very West Ham 2021/22 season line-up to start the brand new 2022/23 campaign.

Manchester City unwrapped a bright and shiny Erling Haaland on the opening day, West Ham had 32-year-old Michail Antonio charging about on his own up front. The poor bugger has been doing that since pre-Covid days.

So how should the club treat the old boys in the West Ham trenches as the new troops step up to the front line?

Craig Dawson
The Ballon D’awson was the subject of much transfer speculation in the summer window, with West Ham willing to let the blood ‘n’ thunder centre-back leave the club if they could bring in a replacement. That replacement was apparently Jan Bednarek, but he got his claret and blues muddled up and found himself at Aston Villa on deadline day.

This left West Ham’s cult hero in a sort of no-man’s land.

Despite being a solid part of the West Ham defence for the last two seasons, he has only ever been a third or fourth-choice centre-back. He knows this, the club knows this, West Ham fans know this. Luckily for Dawson, West Ham have terrible luck when it comes to injuries and ‘you’ll probably get a few games this season’ became ‘you are the only fully fit defender we have’.

In the summer it was revealed Dawson had been commuting to East London from Manchester, the Midlands or somewhere in between – nobody is really sure, and I’ve lost my map to the stars’ houses. That’s a lot of Ginsters pasties at motorway service stations.

Maybe this was a PR line to make people feel sorry for him about his need to leave the club. It certainly worked. Nobody would begrudge him a move now, especially as he’s been such a revelation and never whinged about the price of fuel.

Moyes’ next move: His contract runs out in the summer. Sell him at a cut price to a Championship club like Stoke in January, as that’s between Manchester and the midlands. Then he can’t pop up and head home a corner in the last minute of a crucial end-of-season match, which consigns West Ham to miss out on European qualification. Which is bound to happen if he joins Wolves.

Lukasz Fabianski
Perhaps the biggest disappointment of the opening game of the season against Manchester City was seeing Fabianski between the sticks.

West Ham spent the summer luring Alphonse Areola back to the club following his loan spell last season. He was apparently on big bucks at PSG and needed a bit of convincing.

So everyone was a bit miffed when the 29-year-old French international went straight back into his role as cup keeper, and Fabianski was still number one.

The 37-year-old Fabianski has done a great job for West Ham in his four-and-a-bit seasons at the club and he certainly knows how to save a penalty. But he is starting to get a bit rough around the edges, and his command of the area is becoming more and more suspect.

He was at fault for one of the Chelsea goals (in the match that should never be talked about again) and maybe doesn’t transmit as much confidence to his defence as he once did.

Maybe Areola would help his case by removing the earrings; Moyes doesn’t look like a man who is impressed with the bling.

Aaron Creswell
There was a time when West Ham’s main attacking threat came from the trusty left foot of Aaron Cresswell.

In the 2020/21 season Cresswell dished up eight assists, two more than Liverpool’s Trent Alexander Arnold. But as Cresswell wears claret and blue the media totally ignored this fact, as did the England manager. But England managers largely ignore West Ham left-backs…see Julian Dicks, Frank Lampard (the original one) and erm…utility man George Parris in 1986.

Sadly Cresswell has been on a steady decline in the last six months or so, reaching its nadir in his 19th-minute sending-off against Eintracht Frankfurt in the Europa League semi-final, which took all the wind out of West Ham’s sails.

The 32-year-old doesn’t have the legs anymore to chase the lumped ball over the top, and his instinct is to tug at the shirt of the forward who is beating him for pace.

Only three assists last season would show he’s not having the impact he once had, even in a squad with its fair share of big men. Cresswell’s free-kicks rarely have people on the edge of their seats.

Cresswell has ruled the roost in the left-back slot for many seasons, not-really-a-defender Arthur Masuaku and right-back Ben Johnson being his only main competition.

Now with the arrival of Emerson, Maxwel Cornet and Thilo Kehrer – who despite not being traditional left-backs have all played that position before – Cresswell might be spending a bit more time on the bench.

The Liverpool-born player’s contract also expires at the end of the season, and he has reportedly already bought a house back in Merseyside.

Moyes’ next move: Use him as an impact sub and in cup competitions, might be able to do a job on the left side of a back three. Worth giving him a one-year contract extension if West Ham qualify for Europe again for the 2023/24 season. The rental market is buoyant if he needs to let his new house.

Angelo Ogbonna
West Ham were dealt many cruel blows in the 2021/22 season, but perhaps one the biggest happened a few months into the start of the campaign.

The club were flying high in fourth place as Liverpool came to East London in early November. In the 22nd minute Ogbonna limped off with a nasty-looking injury. Despite the stalwart’s removal West Ham somehow dug deep and pulled off one of the results of the season – a 3-2 victory.

It was later revealed Ogbonna had suffered a ruptured cruciate ligament and would be out for the rest of the season.

Without their commanding first-choice centre-back West Ham wobbled, not winning again in the league until that freak Masuaku goal gave them a 3-2 victory over Chelsea in December.

With West Ham just missing out on Europa League football at the end of the season, it very much was a case of what might have been had Ogbonna’s imposing presence been marshalling the back four for the rest of the season.

Ogbonna is now slowly returning to first-team action but at 34, and the contract extension rightfully given to him during his ACL injury coming to an end next June, West Ham might be waving goodbye to him at the end of the season.

Another player West Ham fans will be sad to see go.

Moyes’ next move: Continue to use him in squad rotation, before being forced to make him first-choice centre back when everyone gets injured. Extend his contract at the end of the season, if he doesn’t want to end his career in Italy.

Michail Antonio
Toughest decision of the bunch, as Antonio has been the definition of a warhorse for West Ham since he was moved to the tip of the spear.

Which is a surprise since he joined the club as a winger who couldn’t really cross and had hamstrings made of blue tack.

Now he strikes fear into European defenders with his bustling runs, that are the very definition of Lance Corporal Jones’ ‘they don’t like it up ‘em’ line from Dad’s Army.

Unfortunately, Premier League defenders are a wiser bunch and Antonio can sometimes look like a forlorn figure as he powers his way down a left wing cul-de-sac looking to cross a ball into the six yard box where he should rightfully be.

Antonio is 33 next March, and those long lone lung-busting runs are starting to catch up with him. The phrase ‘blowing out of his arse’ hasn’t been used this much about a West Ham player since Kevin Nolan played his last full season in the Premier League.

On the plus side for Antonio he is still an effective battering ram and can drag defenders all over the pitch, sapping their energy. You know you’ve been in a game when Antonio is in fifth gear.

Thankfully the club have finally bought another striker in Gianluca Scamacca to help carry the burden of being West Ham’s lone striker, so West Ham’s Premier League top scorer can finally get a well deserved break.

Moyes’ next move: Antonio could be the ultimate impact sub. Not many defenders will want to deal with him in the dregs of any game. The other option is shifting him out to the wing where he’s still a threat on both sides of the pitch. A valuable asset for a few more seasons if wrapped in a bit of cotton wool.