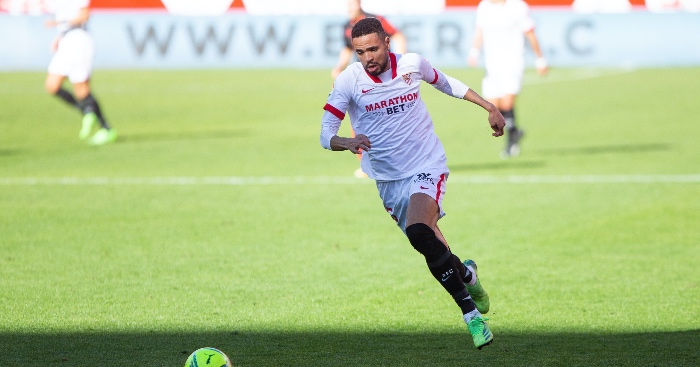 West Ham have reportedly ended their interest in Sevilla striker Youssef En-Nesyri after being priced out of a move.

The Hammers submitted a £22.5 million bid for the 23-year-old on Monday.

They are searching for a new striker to replace Sebastien Haller, who joined Ajax earlier this month.

FEATURE: Who would win a Clone Premier League?

According to talkSPORT, West Ham will not follow up on their interest in En-Nesyri.

Sevilla want £35 million for the Morocco international, which the Hammers are refusing to pay.

They don’t want to overpay on another striker after taking a £25 million loss on Haller.

The initial bid for En-Nesyri included a lump sum of £22.5 million plus £4.5 million in add-ons.

It’s easy to see why Sevilla want an improved offer for En-Nesyri. He’s an integral part of their first team, having scored 13 goals in 26 games this term.

That includes four in the Champions League group stage. They eventually qualified behind Chelsea in Group E to reach the knockout phase.

It’s understood West Ham will now pursue other targets. They’ve been linked with a host of strikers, such as Arsenal’s Eddie Nketiah and free agent Graziano Pelle.

Possibly the most likely option is Reims striker Boulaye Dia. The Hammers were first linked with him a week ago.

The Senegalese international offers club officials with a cheaper alternative. Reims want around £10 million for the player so West Ham wouldn’t have to break the bank.

He is a threat in front of goal, too. Dia has bagged 12 goals in 18 Ligue 1 appearances so far.

Manager David Moyes has previously admitted his club is finding it hard to sign recruitments. He does have the full backing of the board, however.

Speaking recently, Moyes said: “The board have backed me greatly since I have been here, anything I have really asked for.

“But I also know I am not someone who is going to go and ask for money in a period of time in football where wages can’t be paid.

“Do I want a top striker? I certainly do, I really do, to help us. But I am also mindful that football clubs, a lot of them are on the verge of going bust and I have got to make sure that I do things correctly.”

Their next match is against Doncaster in the fourth round of the FA Cup this weekend.