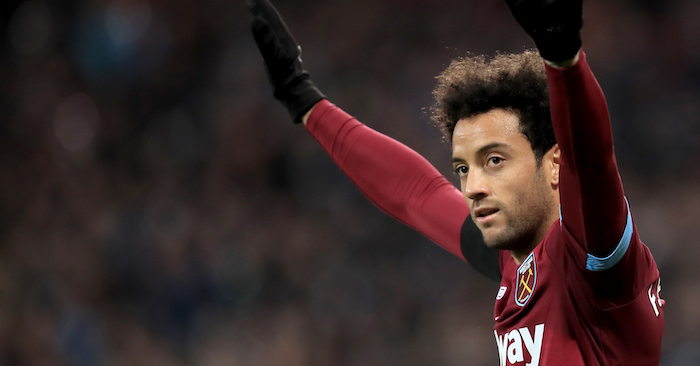 Felipe Anderson has admitted he struggled with the demands of the Premier League following his big-money move to West Ham.

The Brazilian winger arrived from Lazio this summer in a club-record £42million transfer but had failed to live up to his hefty price tag.

That changed on Saturday, though, as Anderson lit up the London Stadium with two goals and a dynamic all-round display in West Ham’s 4-2 win over Burnley.

“I had to adapt and my team-mates always told me they had faith in me regardless if I played well or badly, and that has been really important for my adaptation and to be able to show my game.”

Marko Arnautovic fired West Ham ahead but Johann Berg Gudmundsson equalised for Burnley on the stroke of half-time.

In the second half Anderson rifled his first through the legs of Joe Hart before Chris Wood headed the visitors level again.

With the result in the balance the third goal would prove crucial, and it fell to Anderson before Javier Hernandez wrapped up the victory in stoppage time.

“At 1-1 we believed we could win it, I scored and they equalised again and for some seconds we couldn’t believe it,” added Anderson.

“But we are a team that fights until the very end, that believe in themselves and that helped us stay in the game.

“It’s better to work with a win, we have confidence and we want to get more.”

Burnley have now lost their last three matches, shipping 13 goals in the process, but Wood insisted there is no reason to panic.

“We had these times last year, but it masked it because we had a great start to the season,” the striker told the club website.

“But it doesn’t take it away from the group of the lads here.

“We are going to fight and work hard and get back to winning ways and I know we will do that.”