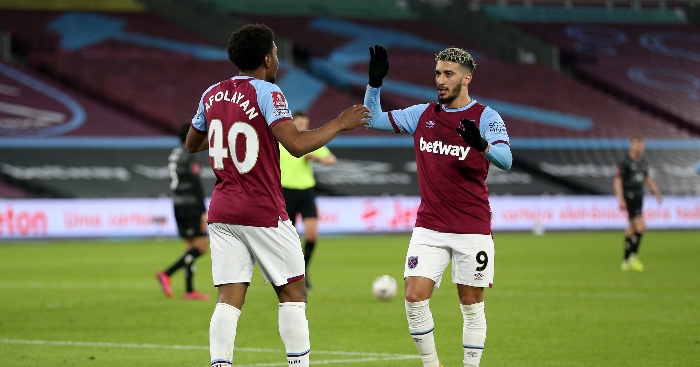 West Ham cruised into the FA Cup fifth round with a routine 4-0 home win over Doncaster.

First-half goals from Pablo Fornals and Andriy Yarmolenko put David Moyes’ side in control and after Andy Butler put through his own net, debutant Oladapo Afolayan added the cherry on top with a late fourth.

The win sets up a last-16 meeting with one of Manchester United or Liverpool for West Ham, who have now won their last five matches.

Moyes made eight changes from the victory against West Brom with midweek matchwinner Michail Antonio and the only forward at the club one of several to drop to the bench.

Winger Yarmolenko led the line in his absence and it was good work by the Ukrainian after he drifted to the right which contributed towards a second-minute opener.

The makeshift forward produced a fine through ball to Ryan Fredericks with the outside of his boot and the defender had time to pick out the onrushing Fornals, who fired into the bottom corner for his third goal of the season.

Doncaster had won seven of their previous eight games and boss Darren Moore picked a strong XI, but they had no answer to the hosts’ firepower.

Manuel Lanzini and Yarmolenko failed to make the most of fine openings before the quarter of an hour mark with West Ham’s attacking foursome enjoying life against the Sky Bet League One side.

In the previous round at Stockport, the Hammers had to contend with a mudbath, but on the London Stadium’s slick surface they were passing the ball around with purpose and regulary cutting through their opponents.

Said Benrahma had been a constant thorn in the Doncaster defence and minutes after a long-range effort had been saved, the former Brentford man created the second.

Rovers gave away possession to the Algerian and he spotted the run of Yarmolenko into the area and West Ham’s number seven found the net with a neat chip over Ellery Balcombe in the 32nd minute.

After a near-perfect first half, the next thing Moyes would have hoped for was for summer recruit Benrahma to get off the mark for the club.

Despite two prolific seasons at Brentford in the Championship, the 25-year-old has struggled for game time since he made the step up, but went close early into the second period when a curled free kick forced Balcombe into a smart save.

The Doncaster goalkeeper was in action again soon after to stop two separate efforts by Tomas Soucek before the third did eventually arrive for the Premier League outfit with 53 minutes played.

Captain Mark Noble drilled a corner into the front post where it got a touch and that was enough to put off Rovers defender Butler, who saw the ball bounce off his knee and find the net.

Moore’s men almost pulled a goal back when Jon Taylor’s cross came for Matt Smith at the back post, but his half-volley clipped the crossbar and went over.

Normal service was quickly resumed and Moyes handed a debut to Afolayan late on and saw the forward grab the club’s fourth with 12 minutes left in the capital.

Fredericks got forward well and saw an effort pushed out by Balcombe, which was straight into the path of former Solihull Moors forward Afolayan and he tapped in from close range to mark his first Hammers appearance with a goal.

There was still time for young goalkeeper Nathan Trott and fellow academy graduate Jamal Baptiste to be given debuts on a pleasing day all-round for three-time FA Cup winners West Ham.