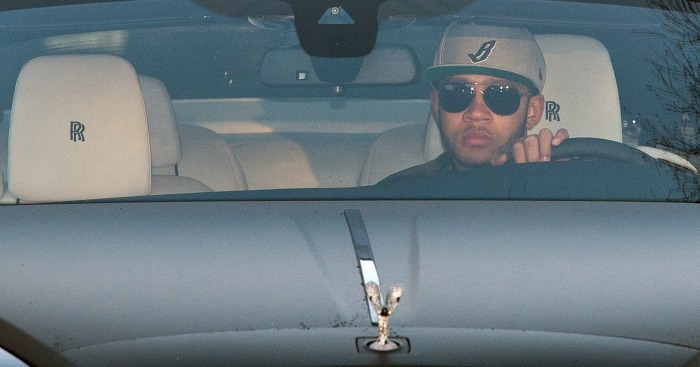 Back in August, when Manchester United were unbeaten in their first five games of the season, the Mirror website ‘informed’ us: ‘Memphis Depay showed off his brand new car when he hit Manchester city centre for a spot of shopping with pals this week. The young winger’s car, a blacked out Mercedes, is befitting of a highly-paid football star.’

The fancy car – befitting of a highly-paid football star, remember – was a matt black £120,000 Mercedes CL 63 AMG. The Dutchman even parked in a loading bay and ‘luckily for Depay, he got away with parking the vehicle illegally’. We can’t help thinking that sentence is missing an exclamation mark! What a character. What a card. But hey, he earns £90,000 a week and he looks like a pretty fine footballer for a pretty fine football team, so park your lovely motor wherever you fancy, Memphis.

Fast-forward four months and Manchester United and Depay’s form had faltered. After three consecutive Premier League defeats in December, ‘Memphis Depay causes stir at Man United training after turning up in flashy Rolls Royce convertible’. The Mirror website had changed their tune somewhat, telling us: ‘The £25million signing from PSV Eindhoven, who was badly at fault for Stoke’s opening goal in Manchester United’s 2-0 defeat on Saturday, shocked management and senior players by arriving at United’s Carrington training complex in the £240,000 Phantom Drophead Coupe luxury supercar.’

There is definitely a grey area surrounding draws (a Ford Focus, perhaps?) but thankfully the Mirror have cleared up any other potential confusion with a vital car update after Manchester United’s win over Swansea for which Depay remained on the bench: ‘Memphis Depay spotted in £250,000 Rolls Royce – just hours after being slammed by Ruud Gullit.’

Spotted? Was he hiding? Clearly he should have been after Ruud Gullit had suggested that he should concentrate fully on his football. The piece goes on to tell us that Depay ‘was seen clambering out of the flash motor in a multi-storey car park in the city centre’. Not parked illegally this time; his is now purely a crime against all that is right and proper. And Ruud Gullit. Now he ‘parades’ the car (now worth £250,000) before ‘clambering’ out like an arrogant, useless oaf. Oh and he ‘has also used it to visit nightclubs in Rotterdam’. Basically, hanging’s too good for him.

In other sporting news, the MailOnline tell us that ‘Ferrari-mad Poulter shows off his new £200,000 supercar (and he’s got a few more in the garage!’), before detailing the car collection of a golfer who has slipped out of the world’s top 50 after failing to win a tournament since 2012. He owns around £3m-worth of cars and ‘proudly presented his latest toy’. Did he not ‘parade’ it? It’s almost like Poulter is allowed to spend the money he earns exactly how he wants.

That is simply not the case with footballers. And specifically with young footballers. The obsession with what car they drive (and specifically the cost of said car) is bizarre. Never mind that £250,000 to Depay is the equivalent of around £1200 to other 21-year-olds. Never mind that any other 21-year-old man given ridiculous amounts of money would spend it on cars, booze and women (and waste the rest). Never mind that frankly it’s nobody’s business how anybody spends a salary paid to them by any business in the private sector. Apparently ‘footballer does shopping in expensive car’ is a story. Especially if that footballer is not performing.

We live in an age when literally any news is good news to websites ruled by the graphs on Google Analytics, and presumably footballers and their cars score excellent SEO points. We should never be surprised that ‘man with money spends money’ is a news story. We should not even be disappointed; we are way past that point. But what is needed is some kind of cut-out-and-keep etiquette guide to be available to all young footballers so they know exactly what mode of transport is ‘befitting’ after every result. 5-0 win? Helicopter. 5-0 defeat? Shanks’s pony. 0-0 draw? Something sensible with five doors and a roof rack, perhaps. Ask Michael Carrick.

Hoping Memphis Depay buys literally the most expensive car in the world this week.