Home Manchester United What do Lukaku and Pogba have in common? 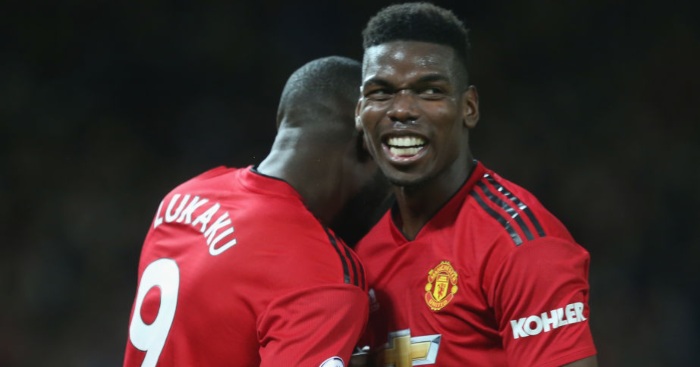 A day in the life
Mike Keegan on Paul Pogba, Daily Mail, June 17:

‘Sportsmail understands the France midfielder’s comments have not gone down well at United, who will not sell him unless they receive an astronomical offer.

‘A source explained: ‘It is safe to say that they are distinctly unimpressed with it, but as far as they’re concerned Pogba will be at the club next season.”

‘MANCHESTER UNITED are prepared to offer Paul Pogba a new mega-money contract in a bid to persuade their unsettled star to stay.’

That’ll show him. Whenever Mediawatch is ‘distinctly unimpressed’ with the petulant behaviour of its errant child, it gives him a massive bag of sweets.

The usual suspects
On the inside pages of the Daily Mail, Martin Samuel has his say on Paul Pogba. Of course he sodding does.

‘PAUL POGBA is looking for a new challenge. No, he won’t try and justify the £89million Manchester United spent on him three years ago. He wants a challenge, not mission impossible.’

Because of course Paul Pogba is the very first player to ever want to change clubs. It has literally never happened before.

Wow. That’s an awful lot to pack into one paragraph – including three different mentions of money. Which of course is apt from a man who left The Times 11 years ago to take the offer of seriously inflated wages at the Daily Mail.

First, the reference to Lukaku, who has scored 113 goals in 252 Premier League games by the age of 26. The idea that he wants to move to Inter Milan because he seeks to ‘screw more money out of another elite club’ is utterly ridiculous, particularly as most reports suggest that Inter could not even match Lukaku’s wages. Oh and your own Daily Mail colleague has said that United ‘are open to selling’ him.

Oh and Paul Pogba – again, according to the Mail – would need to take a pay cut to join Real Madrid. And even more so if the back-page exclusive of your own newspaper is correct in claiming that Manchester United are about to offer him £500,000-a-week wages.

Mind you, both would get a ‘lighter workload in an easier league’, because of course nothing is as difficult as the English Premier League. It’s basically not a place for your work-shy foreign types who are only interested in money and a good time.

‘He doesn’t fancy trying to restore Manchester United to the pinnacle of English football next season, or even the top four. He’s not up for balancing Thursday night fixtures in Europe with domestic consistency, or helping shape a new team under Ole Gunnar Solskjaer, maybe even as captain.

‘These are all significant challenges, but Pogba isn’t interested.’

It’s almost like, and stop us here if the concept is too difficult to grasp, Manchester United are no longer a force in Europe or in domestic football and Pogba – a world champion still rated as one of the best midfielders in Europe – would like to play at a higher level.

Now, we can argue all day about Pogba’s contribution to United’s downfall over the last three years, but the fact of the matter is that really good players will always want to leave shit clubs for better ones. It’s a tale as old as time, song as old as rhyme.

‘And he has already pulled off one impressive challenge. That of fooling some of the people, most of the time.

‘Manchester United chief executive Ed Woodward, for instance. If, as is believed, United are willing to increase Pogba’s wage to close on £500,000 a week, deception is one challenge he has mastered.

‘United came sixth last season, won nothing again, tailed off at a crucial stage and ended in uproar, losing at home to relegated Cardiff City. How can one of the leading protagonists in an underwhelming campaign merit an annual pay rise of £10m?’

It’s ridiculous, right? But take this up with Manchester United and not with Paul Pogba. They’re the idiots here; he just wants to go and earn less money for a far better side. And the fact that he is wanted by Real Madrid suggests that he might be really quite decent.

No they do not. Because anybody measuring creativity with passing success rate is a fool. Pogba had a better passing success rate than such creative midfield types as Aaron Ramsey, Christian Eriksen and Dele Alli, which is fine because that metric is no measure of creativity; you might say it’s ‘unhelpful’. Or that those numbers really do not tell the whole story.

You know what’s more helpful? The fact that Eriksen was the only central midfielder to record more Premier League assists last season.

Not to Samuel, mind…

‘All that makes him stand out in the wider context is his ability to create trouble for Manchester United. This latest controversy has blown up on a personal promotional trip east for adidas. United may well ask what’s in it for them.

‘If reports of the asking price are accurate, £133m. Yet there is little chance Real Madrid will pay that, or much like it. More plausible is that Pogba will become a gigantic pest this summer, in an attempt to try United’s patience and leave at a reduced rate.

‘This is a familiar strategy, one that often works. If United put an improved offer before Pogba and he turns them down, they will know what the closed season holds. The challenge will be all theirs, preventing Pogba capping his ‘best’ campaign by utterly derailing theirs.’

So, if we have this right, a player intent on ‘screwing more money out of another elite club’ while meeting ‘the challenge of racking up higher wages’ is actually going to turn down £500,000 a week to force through a move to a club where he will earn less money? Is this the point when the laziness trope trumps greed?

Derby may give Aston Villa No 2 John Terry a turn as manager if Frank Lampard quits for return to Chelsea | @Matt_Barlow_DM https://t.co/ZnBzmYRo8P pic.twitter.com/GmdVgQD6eP

Caption of the day
In the Daily Mirror:

Yep, that kid Smalling has got something special.

The unexpected hits you between the eyes

England expected to field a few surprises in their @UEFAUnder21 opener v France tonight such as Mount in, Foden out, Solanke in, Calvert Lewin out.

Yep, Mediawatch is absolutely reeling from the news that Dominic Solanke will start for England’s Under-21s after starting just four of their last five games and scoring five goals in the process. How the f***?

Phil yer boots
Obviously, the real shock is that Phil Foden – who started just one of England’s qualification games on the way to this tournament – will miss out to Mason Mount.

‘Phil Foden, the brightest young talent in English football, is set to begin England’s quest to win the Under-21 European Championships on the sidelines.

‘The Manchester City midfielder, who has been identified by UEFA as one of the players to watch at this tournament, had been expected to start the opening Group C match against France in Cesena on Tuesday night.’

And here’s a similarly befuddled Simon Bird in the Daily Mirror:

‘Phil Foden is set to be a shock omission from the England U21s starting line up for their European Championship opener.

‘The Manchester City teenager has been billed as one of the young stars to watch in Italy – but boss Aidy Boothroyd will start him on the bench for Tuesday night’s clash with France.’

How bizarre that actual England Under-21 manager Aidy Boothroyd has decided to pick his team based on their performances in training rather than because UEFA picked him out as one of their players to watch on their website. Does the man not know how this sh*t works?

As Matt Law of the Daily Telegraph says with absolutely no melodrama:

Chris Ballard on the youngest female professional in history