Home Competitions Championship Fulham What is going wrong at Fulham? And what’s the solution? 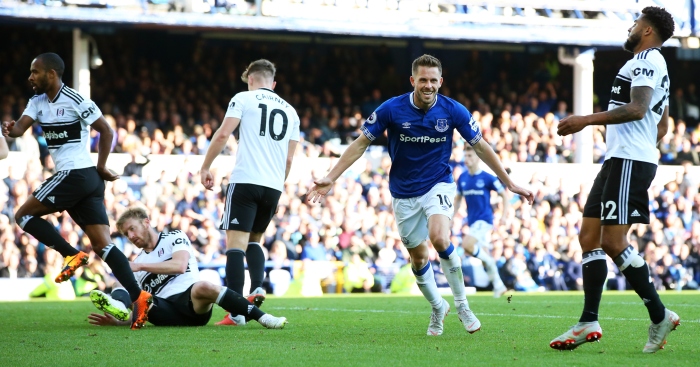 No one broods on the touchline quite like Slavisa Jokanovic. With his arms folded and his head slightly inclined, he looks deep in existential gloom, or like he’s planning a particularly cruel revenge, or both. At that point you really want to keep your distance, especially if you’re a new assistant coach about to suggest a change in formation. His players say that no matter how intense the big Serb looks, he stays cool. But I’m not sure I’d want to find out.

At the moment he has a lot to brood about. Despite liberal investment in the summer, Fulham sit 17th in the table. They’ve won only one of seven matches. They still seem unlikely relegation candidates, but it’s no mystery why they’re not up there with Wolves, the other big-spending promoted side. It’s the GA column, which reads 16, tied for worst with Huddersfield and Cardiff, teams almost universally expected to go down.

Everyone knew that defence would be the problem. In their two years in the Championship under Jokanovic, Fulham had been free-scoring, but all too often free-conceding as well. It was only in the second half of last season that the back line stiffened up, sending the Cottagers on a remarkable unbeaten run that took them to the verge of automatic promotion. But in the final match they conceded three goals to relegation candidates Birmingham City, and dropped into the playoffs. Although they delivered a clean sheet against Aston Villa in the final, there was little doubt the defence needed reinforcement if the team were to step up in class.

Accordingly, Shahid Khan, with the spare change left over from the impending Wembley deal, shelled out £15m for a proven central defender in Alfie Mawson. Decent signing. Unfortunately he wouldn’t be fit for the first month or so, but not to worry: Calum Chambers had come in on loan, and although Tim Ream, last season’s Player of the Year, would miss the first few games as well, the side could get by.

It hasn’t quite worked out that way. Chambers has been below the requisite standard, to put it as nicely as possible. Mawson came back and had passable matches against Brighton and Manchester City, then was so bad against Watford he was yanked at halftime. Now he’s injured again. Ream finally returned last week against Everton, but it’ll be a while before we know if he’s a top-flight defender. Denis Odoi, his usual partner, looks like he’s still getting used to the higher class of competition.

The full-backs are only so-so defensively. On the right are Timothy Fosu-Mensah (injured at the moment) and Cyrus Christie, on the left Joe Bryan, Maxime Le Marchand and sometimes Ryan Sessegnon. Le Marchand is probably the best defender of the bunch (and occasionally fills in at centre-half), but no one on that list is going to cow the opposition wingers. If Sessegnon ever makes it big in the league, it’s going to be as an attacker.

It’s not just the back line, though. As you probably know, Fulham play a short passing possession game, usually in a 4-3-3. It’s an attractive brand of football, but it requires deep midfielders whose primary skill is with the ball at their feet. Kevin McDonald, a regular in the Championship, is an excellent passer, but not quick enough at this level to shield the defenders. Jean-Michäel Seri is wonderful to watch, cool and technical, but a player in his spot on the pitch shouldn’t rank 44th in tackles/90 and 72nd in interceptions/90.

In football you have to give up something to get something, and Jokanovic wants his kind of attack. Tom Cairney – who missed a few matches with injury – is a skilled playmaker. André Schürrle, on a two-year loan from Dortmund, has the pedigree, and although he’s been erratic so far, is a vital presence on the wing. A pleasant surprise has been Luciano Vietto, now at his third loan club from Atlético Madrid. He’s quick and slippery, always looking to advance the ball. Only one player in the league (Benjamin Mendy) has more assists from open play.

The guy who cashes in the assists is your friend and mine, Aleksandar Mitrovic. Quite simply, he’s been a revelation. We all know about his temper, but even so, not once at Newcastle did he look ready to compete at Premier League level. Now he’s physically dominating defenders, displaying good movement and technique as well. He’s tied for the league lead in goals (no penalties, either), only Sergio Agüero has more shots, and no one in the league has more shots on target. He’s performing at elite level, and not for one moment has it looked like a fluke.

But they’re still in 17th. If you’re wondering whether Fulham are underperforming their xG (and of course you are), the answer is no. The numbers say they’re right about where they’re supposed to be. Keeper Marcus Bettinelli is in the top half of the shot-stopping rankings, which is helpful, but he needs more protection. What’s to do?

One possibility is a three-man back line. Fosu-Mensah or Christie on one side, and Sessegnon on the other, would be natural wing-backs. But that’s not really Jokanovic’s style. Even at the Etihad he asked his team to attack as much as possible. In yesterday’s press conference previewing the upcoming Arsenal match, he said his team needed to be more ambitious.

Then there’s André-Frank Zambo Anguissa, who should make the PFA Team of the Year for his name alone. He’s only started three matches so far, but was their best player in the recent loss to Everton, where he combined an appetite for the tackle with the requisite accurate passing. Anguissa can play alongside Seri when two deep midfielders are required, or be the anchor in a more attacking setup.

As for the centre-halves, it’s Mawson/Ream/Odoi/Le Marchand or bust, at least until January. You figure at some point Mawson will be useful. Ream might do a decent job, but today just happens to be his 31st birthday, not the best time of life to debut in the Premier League. Odoi is only about eight months younger. Le Marchand is fourth choice.

So while his striker may get plenty of chances to celebrate, Jokanovic may spend at least as much time brooding, brooding, brooding. It should turn out all right eventually; after all, 17th is good enough in your first year in the league. And the neutral gets the best of both worlds, watching the goals go in at either end. Still, you sort of wish you could cheer the man up a little. But looking into those eyes, I’m not about to suggest a group hug.