Home F365 Features What on earth’s going on with Atlético Madrid? 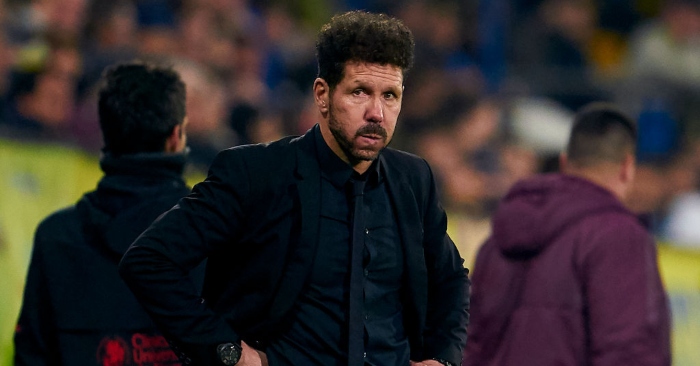 Atletico Madrid were widely predicted to launch a title offensive this season after a summer of significant investment, but instead find themselves languishing down in seventh place.

The fact that their main rivals for the top places – Real Madrid and Barcelona – both had uncharacteristically poor starts to the season meant that this was a particularly excellent opportunity for Atlético to stake a claim as title contenders. The form of both the top two sides has now improved significantly, and it looks like Atleti have missed the boat.

Of their 16 games so far this season, Atleti have drawn eight and lost two. They have only won twice in their last ten league games, against Athletic Club and bottom side Espanyol.

Expectations were high this season after an investment of just shy of a quarter of a billion euros on players, including a huge outlay of €127m on the highly-rated youngster João Félix.

So what has gone wrong? The defence has been as mean as ever, conceding just ten goals – the fewest in the league so far. The problem has been goals, or the lack thereof.

Only Eibar, Celta, Leganés and Espanyol have scored fewer than Atleti’s 16 goals this season, and they are all in the bottom five. The departure of Antoine Griezmann to Barcelona in the summer has left a prolific gap that clearly needs to be filled.

Having just turned 20, it was perhaps unfair to expect Félix to hit the ground running and pick up Griezmann’s slack straight away, but they would certainly have hoped for a return greater than two goals and one assist from his 11 starts.

His more senior attacking colleagues Álvaro Morata and Diego Costa have only mustered seven goals between them, their goalscoring touch having seemingly dried up when it was needed most.

It’s not as though they’re not getting the chances either. Atleti rank seventh in the league for most shots per game, which suggests that there’s little wrong with the supply lines to the front; they’re just being let down by a lack of accuracy from their marksmen.

Perhaps the optimism that surrounded their massive expenditure in the summer obscured the fact that this is a squad in transition. The departure of several key players was bound to take its toll in one way or another.

The cumulative experience of Diego Godín, Griezmann and Juanfran has now been lost to the squad, as well as the talent of youngsters Lucas Hernández and Rodri, who were sold to Bayern Munich and Manchester City respectively.

The new signings have largely flattered to deceive. There were high hopes for Marcos Llorente and Mario Hermoso, but neither has performed particularly well so far. New full-backs Kieran Trippier and Renan Lodi have impressed on occasions, but more consistency is needed.

Manager Diego Simeone has tried to control the expectations of the fans and the media, saying after the recent defeat to Barcelona that “you have to understand the huge amount of change that has taken place in the team, we need time to improve”.

The problem for Simeone is that time is a scarcely-afforded commodity in modern football, and he could yet become a victim of his own success. Having led Atleti to a La Liga title, two Champions League finals and into a state-of-the-art new stadium, the expectations on the club are now higher, and having tasted success the fans and the club hierarchy are now craving more.

Of the squad that hit those heights earlier in Simeone’s reign, only Koke Resurrección and Diego Costa remain. Leading Atleti into a new era with a whole new squad and a whole new set of expectations in arguably the Argentine’s biggest challenge yet.

A win is needed against Lokomotiv Moscow at the Wanda Metropolitano on Wednesday night to be sure of qualification to the Champions League last 16. Failure to progress in Europe coupled with a continuation of the current run of poor league form could put Simeone under serious pressure for the first time in his eight years at the club.