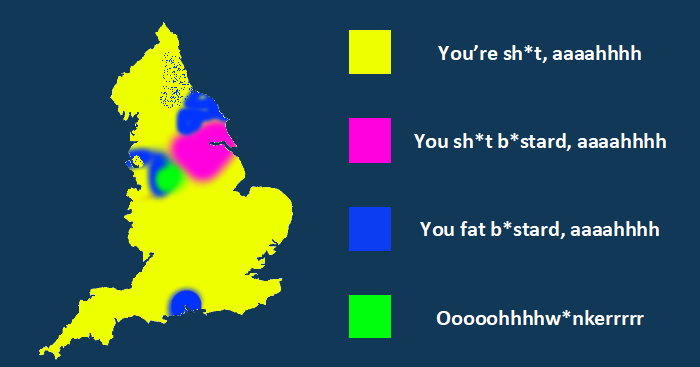 Let’s say a goalkeeper is preparing to take a goal kick. What do you, the fan on the terrace, scream after them as they run up to punt the ball upfield?

That’s the question I put to Twitter in the form of a short survey, and I have dedicated the last several months to crunching the numbers, speaking to psychologists and linguists, and trying to put together a true picture of what our choice of taunt says about us as people, and how they can come to define a regional character.

Either that or I sat on the results for long enough that I forgot about it until just now and then thought “oh yeah, this might be a fun way to poke fun at regional stereotypes”. There’s no way of possibly knowing for sure.

Let’s get into it.

The South
Almost every respondent from the south of England opts for “you’re sh*t, aaaahhhh” when taunting the opposition goalkeeper.

As many of these respondents are from London, this is perhaps revelatory of a terrible fear of inadequacy in the big, scary, competitive city, where every part of everyday life is at once both terrific and terrifying, because living is expensive but life is cheap.

With that kind of cut-throat labour market, it is only natural that southern residents live in mortal dread of being outed and exposed as being sh*t; that one day your boss will realise you have had no idea what you’re doing the entire time, and immediately fire you, and by lunchtime you’ll be forced to resort to begging or working in social media.

To live in the south, then, is to live in fear; and they release that fear by turning it around onto their goalkeepers. Is it a coincidence that the goalkeeper wears number one, as in “looking out for number one” or “speaking in the first person”? No, it isn’t. Is it mere happenstance that this player singled out for criticising is the most different and most lonely? Surely it can’t be.

Southerners see themselves in goalkeepers, and they hate it. They hate what it has made them. And the goalies bear the burden. It’s unfair and toxic, but hey, that’s the south.

The only respondents who went with anything else were from Southampton, where “you fat b*stard, aaaahhhh” seems to be more popular. They love to body-shame on the south coast, apparently, possibly due to their naval tradition; you don’t want to be fat on a submarine, believe you me.

There were also some more inventive efforts from Dulwich Hamlets, who apparently like to rock out “ooooohhhhhh ska beat!” and/or read out some of the goalkeeper’s tweets (“Gutted you missed that parcel mate”, suggests one genuine response). On the other end of the spectrum, yet just a short hop across south London, we have Streatham, where a simple “f*ck off c*nt” gets the job done with minimal fuss.

The Midlands
So what, you may ask, of Midlanders, who overwhelmingly go for “you’re sh*t, aaaahhhh” as well?

Midlanders aren’t doing it out of fear that they themselves will be exposed. They just genuinely think everyone else is sh*t. Living in places like Coventry or Nottingham will do that to you, in fairness.

Yorkshire
You’ll notice that I’ve split the north into sections. That’s not just because the north is inherently better and deserves to be discussed in greater detail, but because there was genuinely a much wider variety of answers across the region.

Let’s start with the best county, Yorkshire. There is still a bit of “you’re sh*t, aaaahhhh”, but the prevailing mockery is the slightly more nuanced “you shit b*stard, aaaahhhh”.

That’s clearly because of Yorkshire folks’ rugged determination to be seen as down-to-earth, tell-it-like-it-is, straight-talking people. The appendage of an additional insult is a tacit acknowledgement that yes, this goalkeeper is sh*t, but we are all sh*t, so that’s not the issue. Rather, the problem is that they are not only sh*t, but also a b*stard.

The goalkeeper has thus been simultaneously reminded of his place in the world and of his lack of moral fortitude, and will have plenty to think on for the rest of the afternoon. Perhaps, in time, the goalkeeper shall learn to mend their ways and become a more well-rounded member of society.

Also, Yorkshire is the best accent to say ‘b*stard’ in, so you can’t blame them for showing it off.

The North East
A confusing place, in many ways. People in the north-east can’t seem to agree on what the appropriate goad should be, with some going with the classic “you’re sh*t, aaaahhhh”, but nearly as many again selecting “you fat b*stard, aaaahhhh”. That theory about the naval tradition is looking better and better as this goes on.

Mysteriously, a greater proportion of people from the north east, particularly Newcastle, selected “none of the above”, suggesting there is something else they like to bring out. None of them told me what it was, though, so the only thing to do is try to sign up as a goalkeeper in Gateshead and see what happens. There must be a six-part BBC Three documentary series in that.

This fractured and strangely varied response is classic north east, where Geordies, Mackems and Smoggies are desperate to distinguish themselves from each other even though they’re clearly all exactly the same. Come off it, lads, you’re fooling no-one.

The North West
Also quite varied, but respondents from the north west who selected “none of the above” were helpful enough to fill me in on what they do say, which is how a fourth option came to be added to the poll: the very distinctly Mancunian “Ooooooooohhhhhhw*nkeerrrrr”, which one person helpfully pointed out has a near-silent ‘w’. It’s reasonably clear that this is another example of a populous using insults that reflect themselves.

As we drift across the woollyback territory I was myself raised in, we start to see smatterings of ‘you fat b*stard’ again, which I found reassuring as that’s how I remember it from childhood; by which I mean, it’s what we would shout on the playground, rather than that my dad would shout it at me on the rare occasions I had to go in nets or anything traumatic like that.

But on reaching Liverpool, we’re firmly back into “you’re sh*t, aaaahhhh” territory. The only surprise here is that it isn’t “you used to be really good but in general have mostly been sh*t recently, aaaahhhh”, which admittedly isn’t as catchy, but would be more in keeping with that old bit of cod psychology I’ve been trotting out since word one here.

Abroad
I don’t believe for a second that the good people of Amsterdam actually shout ‘I hope your dog dies of AIDS’.