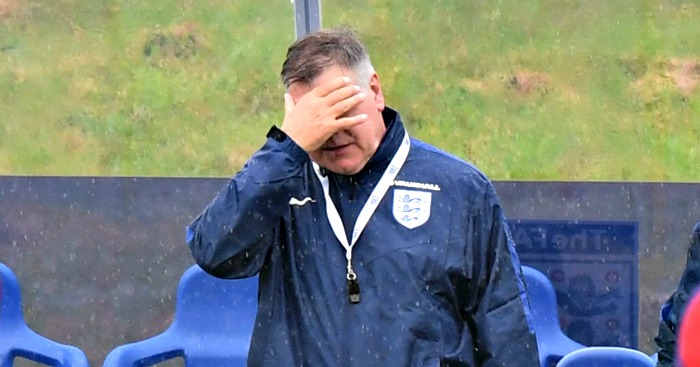 ‘The purists, all those hipsters who have been raving about Luis Enrique’s dream team, will be tied up in knots for weeks trying to explain this away.’

It took Neil Ashton three paragraphs to call people who think Spain – who had not lost in 90 minutes since Euro 2016 and had not lost a competitive fixture at home since 2003 – are good, ‘hipsters’. That must be some sort of record.

Foxes in the box
Ashton positively lords it up in his Sun column, saying ‘Spain had the ball. England had the balls’. ZING.

He goes on to say that ‘this was dreamy stuff’ from England, who were ‘playing with courage and conviction’ and ‘made Spain’s defence look pretty stupid’. The hosts ‘could not cope’ on this ‘momentous night’.

‘It was 31 years ago when the Teletext page finally updated with confirmation that Gary Lineker had scored four times against Spain inside the Bernabeu,’ he adds. ‘Given Spain’s standing on the world stage, this felt even better.’

Ashton was rather more grumpy on October 8.

‘GARETH SOUTHGATE seems to have overlooked England’s dreadful performances in the Nations League opener against Spain and the friendly with Switzerland when he picked his latest squad.

‘The latest call up, for Brighton defender Lewis Dunk, smacks of desperation after injury forced Burnley’s James Tarkwoski out of the squad on Sunday.

‘It is all well and good looking outside the top clubs for international footballers, but they usually get found out at the highest level.’

It did not feel like Harry Maguire and Ben Chilwell were ‘found out’ on Monday.

Absolute Busquets
One player was ‘found out’, mind you. And Sam Allardyce is on something of a crusade, with talkSPORT providing the soapbox as per.

“The praise about Busquets must be stopped,” he begins, as if fighting some kind of actually worthwhile cause.

“He’s no better or worse than Eric Dier, for me. Busquets is a sitting midfield player who breaks up play, intercepts, passes it very quickly and is intelligent. That’s what he is. He’s not much more than that, but he gets a lot of praise for it.”

“Whereas Eric Dier does a similar job, but sometimes gets loads of criticism for it.”

Because Busquets has done it really bloody well at the absolute peak of the game for years on end, while Dier is still inconsistent and ineffective at times. It really is that simple.

“Busquets has been a great player for Spain and Barcelona, don’t get me wrong. He’s a very effective player and is the first pick for every manager because he plays such a simple game.

“But we laud him as a genius, whereas our own we don’t, we criticise.”

The Tottenham midfielder is good – and that tackle was glorious – but they are on completely different levels.

And Harry Maguire was far better than Sergio Ramos last night. Are you going to pretend they’re of a similar standard?

Dier straits
Sami Mokbel has done the player ratings for the Daily Mail, and here are his thoughts on Dier (7.5).

‘A calm head in the heat of battle.’

He did look especially calm when racing half the length of the pitch to clatter into someone in their own penalty area.

What is the opposite of clickbaiting?

Butcher v the English language
A reminder, were it ever needed, that you should not let Terry Butcher perform surgery on you.

Very pleased that Terry Butcher's career as a surgeon never took off pic.twitter.com/Ok1TeYGV9i

‘STILL think Gareth Southgate’s on the road to nowhere with England?’

Fear factor
Rather wonderfully, and with no hint of sarcasm, Samuel later adds that while Spain are probably still the favourites to win this Nations League group, England ‘are no longer fearing relegation’.

The panic is over.

Sterling work
Mediawatch did wonder how the media would treat Raheem Sterling after his two goals. Would he be able to drive whatever car he wants?

Dave Kidd, The Sun‘s chief sports writer, pays tribute to Sterling in his column. He admits ‘there has not been a lot of love for him from media or public’, understandably opting not to call out his own paper’s role in that vilification. But he does say that the winger ‘was far better than most punters seemed to think’ at the World Cup.

Still, the desire to aim a needless dig cannot be resisted. Kidd writes:

‘Sterling, the little wriggler, is an immensely popular man in this England squad.

‘Coach Southgate had indulged him at times, especially when he turned for [sic] England’s pre-World Cup training camp a whole day late.’

He indulged him? By privately admonishing him and accepting the subsequent public apology of a clearly contrite man who had made a mistake, albeit a slight one? What alternative punishment do you propose for being a few hours late?

But there is always one…

Collywobble
Stan Collymore almost – almost – got away with it this week. He almost managed to speak his mind for the Daily Mirror but bury his thoughts deep enough in a sea of England positivity for them to be ignored.

Almost. But he manages to try and absolve Jose Mourinho of blame at Manchester United because ‘he hasn’t had a self-planned sabbatical in the same way Pep Guardiola has or Zinedine Zidane is doing’.

You see, ‘Mourinho has been in the spotlight constantly for more than a decade’ so is obviously ‘frazzled’ and ‘shattered’.

Colllymore then takes aim at Jurgen Klopp – for this is a piece questioning just how good he and Maurizio Sarri actually are – by saying ‘he will start to feel the heat’ if he doesn’t win anything at Liverpool. ‘That is ultimately what managers are judged on,’ after all.

That is all well and good, but Klopp has had four months out of management since taking the Mainz job in February 2001; Mourinho was out of work for a full six months between being sacked at Chelsea and appointed at Manchester United.

Mind you, that wasn’t ‘a self-planned sabbatical’, was it? Silly Klopp for not getting himself sacked.

Recommended reading of the day
David Squires on England in the UEFA Nations League.