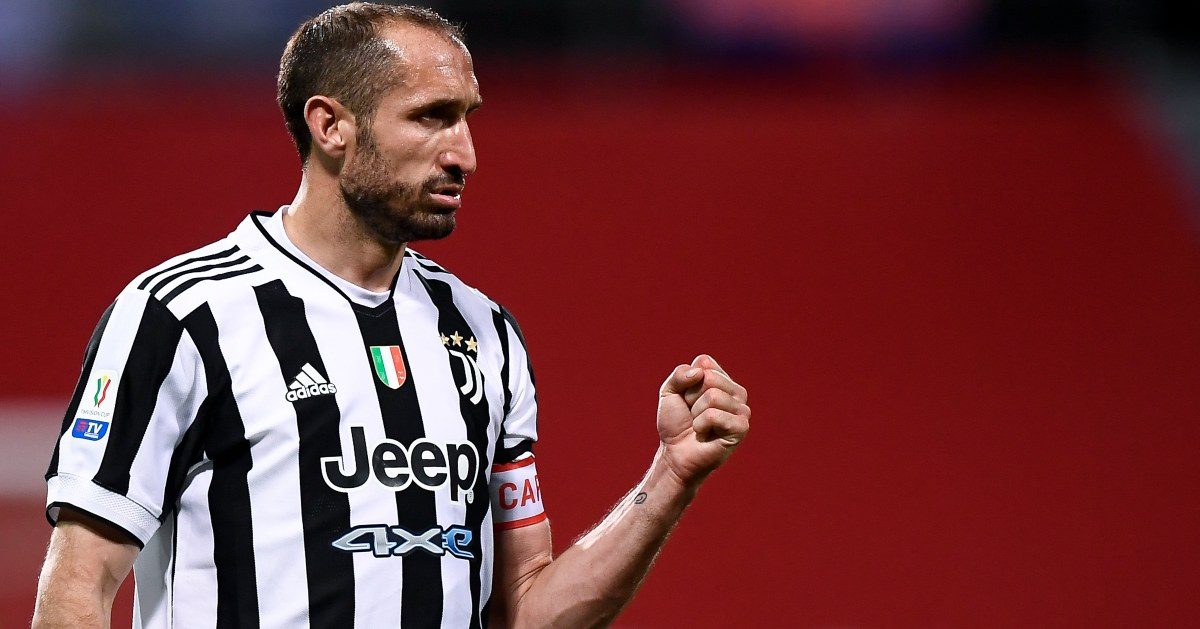 Johnny Nic casts his wandering eye towards Turin and ponders: What’s so great about Giorgio Chiellini?

Who’s this then?
Giorgio Chiellini is a 36-year-old, a 6’2” Italian defender born in Pisa. He is one of the finest centre-backs of the last 15 years but he can also play on the left of defence in a three, or left-back in a four.

He has played for just three clubs: Livorno (he was co-owned with Roma, though never played for them); a year’s loan at Fiorentina; and, of course, since 2005, Juventus, notching up 645 club games and bagging 43 goals along the way.

He was a crucial part of Juve’s team that was relegated after all that naughty business, but bounced back and by 2011-12 was a title-winning machine, bagging nine Serie A titles, one Serie B, five Coppa Italia trophies and four Super Coppa wins.

For Italy he was a runner-up at the 2012 Euros. His first cap came in 2004, though he didn’t cement his place until after Italy’s 2006 World Cup win. He now has 109 caps and is still a first defensive pick, though his body is starting to get a bit brittle. He had retired from international football in 2018 but that didn’t last long.

Since 2010 he’s been in a defensive partnership with Leonardo Bonucci which must be one of the all-time great pairings for club and country. Though Bonucci left for Milan in 2017, he was back a year later and they still started together for Italy in the group games of the current Euros before Georgio got injured.

They say that farmers eventually end up looking like whatever it is they grow. Bonucci, as the years have passed, has started to look more like his defensive partner. With 70 years between them, they’re still a fearsome sight.

He won the coveted Defender Of The Year title in Italy three years running between 2008 and 2010 and Juventus Player of the Year in 2008.

Massimiliano Allegri described him as “the best defender in the world”. Former Livorno manager Walter Mazzarri once labeled him as “a force of nature” and said he could mark three players all on his own.

Unquestionably, he’s a defender’s defender. So much to admire in how he goes about his art. Not averse to deploying the whole panoply of the dark arts to prevent a goal. Few take conceding a goal worse than Giorgio.

The two most Italian looking men in the world are uncle Pat from the sopranos and Giorgio Chiellini pic.twitter.com/HIC71Qy37t

Why the love?
Somehow, even if you didn’t know who he was, you’d know he was Italian. He looks like a Roman emperor. You can just see him in one of those short leather skirt things holding a sword and shield, patrolling up and down Hadrian’s Wall, doing beautifully well-timed sliding tackles on the restless natives. On the field he’s one of those defenders who just loves the art of defending. He takes immense joy from a well-timed tackle or block. Thwarting is his business and business is good. If you want someone thwarting, he’s the thwarter for the job.

In order to do this to the elite level he performs at, you need several major skills all rolled into one. You need timing, strength, positioning and speed. On top of that you need the sort of bloody-minded never-say-die spirit to never give up on anything as a lost cause.

In an era when everyone wants to be, in that awful modern phrase, a baller, Georgio absolutely doesn’t. While he can pass it efficiently and can bring it out from the back if you absolutely insist, he must, that is not why he is playing football and he has little interest in such frivolity.

He’s there to track an attacker, to hunt him down the way a kestrel hunts a vole. There is no finer sight in football than to see a striker accelerating onto a through ball, appear for a moment to have got clear, only to have Chiellini advancing on him at pace, eating up the ground with every stride. You know he’s there. He’s almost on you, you’d better shoot, but too late, he blocks your shot with his foot and it rebounds out for a throw-in. You’ve been Chiellini-ed.

While I know he has played full-back at times, he just seems to be a centre-half by DNA. He looks like a centre-half, you can’t imagine him playing any other role. How is that? It must be down to the grizzled warrior appearance, the permanently exhausted, almost world weary way he carries himself. It is impossible to imagine him as a young person. He must’ve been born looking about 35.

The art of defending is not for everyone. It may even be a dying art. There are those fans who cannot conceive of why someone would rather watch a great defender than a great striker, but it has always been an important part of football and we risk outlawing it in favour of more attacking play.

What the people say
Maybe you need to be connoisseur of all things defensive and all things Italian for Giorgio to give you the feels, so this week’s post bag was a little more anorexic than usual, but even so, there are plenty who love a big, hard, dirty, Italian bastard. We start, as usual with a 4_4_haiku…

Brains, brawn and fervor
An elegant bulldozer
Last of the old guard?

– He can make the most evil shithousery a thing of beauty.

– Has looked retirement age throughout his entire football career.

– The Michaelangelo of the defensive header.

– People derided Italy for not producing top class defenders again towards the tail end of Maldini/Nesta/Cannavaro. It is a credit to him that they now say the same with “After Chiellini, Bonucci….”

Neither his face or his game has changed from 10y ago which makes me think he’s some kind of robot. One of the ultimate “oh he’s not that quick so I’ll just run at him” guys who just laughs at you when you actually try to run at him while taking the ball with ease

– Like a timelord, seems to have been old but the same age since I was young. And I’m fricking in my 40s

– He’d rather murder his own family than concede a goal

– The current epitome of “Italian defender who must be about 47 but somehow both evergreen and looks iconic”. Seriously, I couldn’t tell you who he’s now playing for but…boy, do I know who he is or what?

– On a strange episode of a programme we made at work, I had to praise the virtue of Chiellini while my fellow pundit had Totti (told you it was strange). The man is a born winner and has that all important “bastard” about him that sets apart the elite from the merely great.

Against Turkey in this Euros, this was classic Chiellini. Note the air punch to celebrate a tackle…

It’s all here, the hair pulling, the elbowing, shedding blood and the general kick-up-arsing way of stopping goals. It’s a thing of absolute beauty…

Future days
His contract with Juve was up on June 30 but it seems the club is set to extend it for another year.

He must be coming to the end of his long career as he heads towards 700 club games, though it isn’t impossible to think he’s got at least two more seasons left in his legs yet, maybe even three, if managed well. I suspect that in 20 years time he’ll look just the same as he does now and we’ll all be saying how he hasn’t aged.

Great goalscorers have their goal stats to support their case for their own talent. They have the match-winning strikes to point to, but defenders don’t have such luxuries. While a more granular look at the stats will show how many blocks and successful tackles he’s made, most will not look that deep and so his achievements may not be suitably archived to the history books. However, he will live on in supporters’ hearts as a legendary Italian defender, almost in the classic style.

As a man with a BA in economics and commerce from the University of Turin and a master’s degree in business administration, also from Turin, it seems unlikely he’ll spend his 50-year retirement goofing around, endlessly playing golf and FIFA on a massive TV, rather he’ll use his education and intellect to some greater end. He’s actually a twin. How do we know it’s even been Giorgio playing every game?

Last year he released an autobiography and donated all the profits to charity. Aww. When the history books are written about this period, he will be front and centre as one of the greats and people will still say ‘he looks too old to be a footballer’