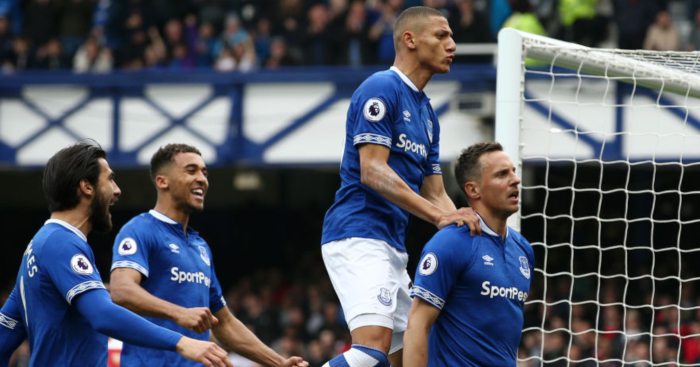 As we turn into the home straight of the Premier League season the race is on. Who will win the big one? Will it be Wolves, Leicester City, Everton, Watford or West Ham?

Who will hold the trophy for finishing seventh proudly aloft?

What? There is no trophy? Well there should be because seventh is the new first, isn’t it?

Seventh is the very best 14 clubs can hope to achieve at the start of every season, so the team who resides there at the end should be awarded some sort of trophy for that success.

The top six are now protected, not by a glass ceiling, but by a reinforced steel door that would take many hundreds of millions of pounds per season for many seasons to blow open. Without some sort of best-of-the-rest award, the majority of the league now has nothing to play for, nothing to achieve apart from survival; not living, just existing, nothing but existing.

Leicester City hold the spot right now but are 14 points adrift of Manchester United so there’s no chance of them finishing any higher. Last year Burnley were nine short of a poor Arsenal side which managed to lose 13 games and still finished way ahead. In 2016/17, Everton was eight points shy of that dreadful Manchester United side; Southampton in eighth were a cavernous 23 points off sixth.

It was, of course, the Foxes’ incredible title win which has ensured this will now forever be the case. No such ruffling of the elite feathers can ever be tolerated again. We expect this season’s situation – when seventh is closer in points to 20th than first – to become the norm.

The concept of a side being ‘on the beach’ for the last week or three of a campaign is not a new one, but it used to be the odd one or two or three teams who could not get significantly higher, nor significantly lower. And it was an end of April, early May thing. But as we stand, with seven or eight games to go, and only one relegation place left open and probably only three sides that could take it – with Cardiff City being strong favourites – at least 11 sides have nothing to play for. Eleven teams on the beach, already playing exhibition football. Eleven zombie clubs just waiting for the season to end, the lifeblood of competitive football drained out of them. Waiting to go down or to stay up. Just waiting.

Oh sure, you get a few more quid in your merit payment for finishing a place or two higher, but no-one cares for such pennies. Last year’s 17th-placed Southampton were given £7.7 million for the achievement, while Burnley in seventh received £27 million. A lumpy old sum you might think, but less so when set against the additional £100million and £92million they respectively got in total from their cut of the Equal Share, Facility Fees, International TV and Central Commercial fees. The difference between tenth and seventh was less than six million, which to put it in perspective, would pay Alexis Sanchez’s wages for about four months, or one player the league’s average wage of 50 grand per week for about 30 months.

So these crumbs from the groaning Premier League money table offers little to inspire players or clubs. Even a few extra quid in their pockets in win bonuses means little when you’re already in the too-rich-to-spend-it-all elite.

Each game becomes an isolated event with no greater or lesser importance to the club earlier and earlier in the season: an exhibition game in all but name. No-one involved really cares if they finish 15th, 11th or eighth because it just doesn’t matter. There is no consequence. There is no reason to try harder, get better or invest more when an unrewarded seventh is the peak of your achievements.

It doesn’t seem right that when the season starts in August, 14 clubs know the only thing they can ever achieve is to stay in the league. They’re only there as cannon fodder for the top six. If there was a seventh place trophy, five or even six sides would currently be in contention for it and probably will be until the final game. Even a seventh to tenth four team semi-final and final to decide the winner would be an improvement and keep interest for fans alive. Something has to be done.

This year, given the way the cups, top six and Europa League are working out, there is a chance the seventh-placed side will get entry into the Europa League qualifiers next season. If the Seventh Trophy always guaranteed this, it would only add more sweet sauce to the pudding.

Trouble is, the Premier League and Champions League propaganda is a strong and addictive brew and exposure to enough of it can, it would seem, make you blind. As a result many fans, player, managers and clubs are not hugely interested in the Europa League, never have been, never will be, with some seeing it more as hindrance than reward. This is very puzzling really, because you’re just doing yourself out of excitement and variety by thinking like that. You’re guaranteeing every season in the top flight will achieve absolutely nothing other than getting enough points to not be relegated. For how long is that enough? It’s fine for the likes of Wolves who have just come up and are new to it. But will it be that way after three of four years? Will it be as thrilling for Bournemouth to do another tour of duty in the bottom 14 in 2019 as it was in 2015? Perhaps I’m wrong, but it seems unlikely.

Maybe when two competitions relentlessly market themselves as ‘Premier’ and ‘Champions’ even though the first is highly questionable and certainly subjective while the latter is an actual downright lie, any competition without a superlative in its title is easily ignored.

However, we cannot ignore the new realities. If the Premier League is set to get ever less competitive, and it seems likely as those bottom 14 sides are now rarely able to beat a top-six club, especially away from home, we actively need something for those 14 to try and achieve or otherwise, well, what’s the point? What is the f**king point of any of it?

And given they rely on our support for their existence, the Premier League and its clubs do not want us to be asking what’s the f**king point too often, because we might come to the conclusion that there is no f**king point anymore. We might come to the conclusion that the whole thing is a pointless charade, not worthy of our money and time. And we might realise that the Premier League isn’t even about football, it is just about the f**king money.

So shut up and give us a Seventh Trophy, yes it would symbolise the dysfunction at the heart of your whole business, but for a while it might take our minds off pulling the whole shameless edifice down and building something that works for the many, not the few.