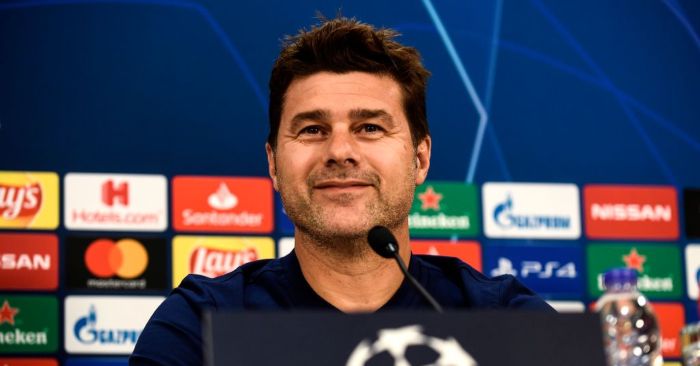 Tottenham boss Mauricio Pochettino has revealed an invitation for dinner with his players next week shows they are still behind him.

Spurs‘ wretched start to the season, where they have won just three games, has been dogged by reports of dressing room unrest and players unhappy at the Argentinian’s methods.

But Pochettino and his coaching staff were sent an invitation for a team dinner next week from an unnamed player on a group WhatsApp chat.

The boss insists that shows the group is united and committed to the cause.

“When last week, you receive a text from the player inviting you and the coaching staff for a dinner only two things can happen,” Pochettino said.

Pochettino’s insistence that his squad are all together, despite the turbulent “storm” they are having to ride out, has made him believe a January transfer window overhaul is not necessary.

The Argentinian has been desperate to refresh his squad over a number of years, but the most recent attempt fell flat on its face in the summer, with so many of his players not leaving.

He has never been keen on big changes in mid-season and says the current situation is not going to change his thinking.

“I never was keen on January and I will not change now because it is a tough period or tough few games, I’m not going to change the way I think or see things,” he said.

“We are not going to force anything because we believe the squad is a decent squad. Now we need to be strong our decision was right, because we are suffering a storm now we cannot now change quick.

“Now it’s the time to be responsible. First me and then the players, everyone.

“For me, that’s it. I am not talking about January with anyone. I told the players, for me, January is too far away.

“Because they know me, after five and a half years, that all the rumours and all the opinion, of course we need to respect all and we respect all, but what is going to happen sometimes is the complete opposite that people are saying.”

After such a poor start to the season, which has included a Carabao Cup defeat to League Two Colchester and a 7-2 humiliation against Bayern Munich, Pochettino says that even if he wanted to, a January fix would be too late.

“Now is not a point to talk about January, refreshing the team,” he added.

“We need solutions now. We cannot think, ‘OK, we forget now and in January we are going to fix the problem’. It’s not like this.”