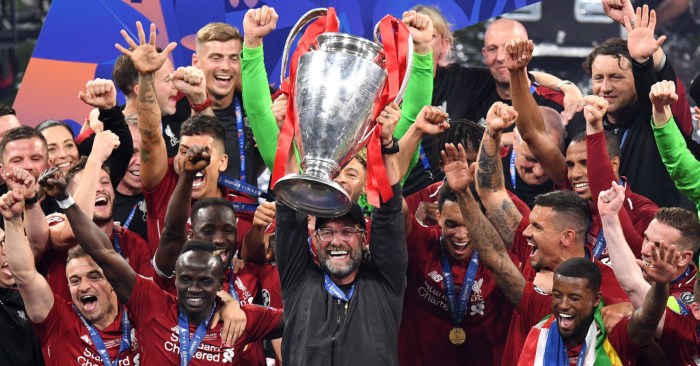 The UEFA points system tells you that Bayern Munich are the third-ranked club side in Europe, behind only Real Madrid and Barcelona. Your eyes have to move down eight more places – past Atletico Madrid, Juventus, Manchester City, Sevilla, PSG, Arsenal and Porto – to reach the European champions in 11th place, just ahead of Chelsea.

Manchester United, in case you were curious, sit in joint 17th place alongside Tottenham, hampered by a season outside of Europe after the David Moyes sh*t-show. The rankings tell you many things – not least that UEFA protect their own, rewarding progress in the Europa League with giant swathes of points not commensurate with its standing in the game – but chief among them is that Liverpool’s arrival at the top table is a relatively recent phenomenon.

To reach back-to-back Champions League finals is an astonishing feat on the back of a season outside of European competition; ‘unprecedented’ does not begin to do it justice. The identity of Liverpool’s opposition in the final – and a 26-point Premier League gap – made this a must-not-lose affair, but reaching consecutive Champions League finals was in itself extraordinary. It’s an achievement only matched by Manchester United, Bayern and Real over the last 15 years. For all the investment at Chelsea, Manchester City and PSG, it was Liverpool who joined that storied company through a combination of excellent coaching and shrewd investment. It cannot be repeated enough that this is a Liverpool side that finished eighth just four seasons ago. And yet there are fools in the English media who would have you believe that Klopp needed an FA or League Cup triumph to somehow prove that he was a winner and that he ‘got’ English football.

Bayern Munich – fresh from winning a domestic double after finishing the season with 14 Bundesliga games unbeaten – are openly courting the German, with Franz Beckenbauer saying: “I want nothing more than to see Klopp come to Bayern one day.” Spare a thought for poor Niko Kovac, judged like Barcelona’s Ernesto Valverde on European failure above domestic triumph. Bayern may have more money, more trophies and considerably more UEFA points than Liverpool but they are still looking with envy towards Merseyside and a European impact they have not made since 2013. Beckenbauer even attempted to sell a move to the German superclub as a rest, saying: “I think that a job in England robs you of energy.” Nice try, Franz.

Meanwhile, Juventus – Italian champions and European royalty – are pursuing Maurizio Sarri, derided as an oddball and a failure in England despite winning the Europa League, while Real openly pursued the potless Mauricio Pochettino because they recognised the phenomenal job he had done in establishing Tottenham among the top 20 clubs in Europe. They all know that thriving in English football cannot be measured solely in trophies. Bayern do not covet Klopp because his Liverpool side edged past Spurs in 90 minutes on Saturday night, but because he has taken Liverpool from 42nd in the UEFA rankings in 2015 (below Dnipro Dnipropetrovsk and Sporting Braga) to 11th in 2019 and the likelihood of overtaking PSG into seventh by the end of next season.  The Reds would give Klopp a ten-year contract tomorrow for the same reasons.

The wonderful thing for Liverpool fans is that Klopp clearly has no intention of leaving for Juventus, Bayern or any other club that looks like an upgrade on paper. He appears to be unmoved by the lure of being handed the keys to the fastest car on the track. Liverpool offers glory, freedom and the kind of hero status he is unlikely to earn elsewhere; it comes to something when all Bayern have to offer is the prospect of an easier life away from the slog of the Premier League.

Maybe it’s a job that Klopp can take in his dotage, but right now the hyperactive German is incredibly well suited to English football and to Liverpool in particular. To walk away from an intense, fascinating and respectful rivalry with Pep Guardiola at a time when the Reds could keep the core of their team for the next three years would be absurd.

Right now, there is no coach in world football whose stock is higher; nobody outside these shores is talking about a Premier League title thrown away. While Virgil van Dijk vies with Lionel Messi for the Ballon d’Or trophy, absolutely nobody is challenging Klopp for the FIFA Men’s Coach of the Year gong. Less than four years into a seven-year project, don’t let anybody tell you that the German is not ahead of schedule just because he only has one trophy.