Home F365 Says When did Germany become the new England?

We did not believe it until the very last second but this Germany side is abject... 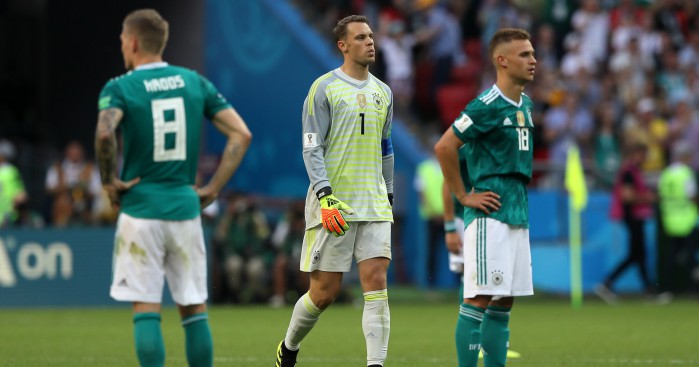 Slow and ponderous with a complete lack of dynamism, rhythm and creativity, making them ridiculously easy to thwart by even the most limited of opposition. You watched in disbelief as they misplaced passes, allowed the ball to run under their feet and ran as if through quicksand. When did Germany become the new England?

All those headlines about Germany’s squad being so ludicrously strong that they could afford to leave Leroy Sane at home now seem a lifetime ago. How England – reluctantly taking Danny Welbeck in the face almost no other options – would have loved to have those problems. What we did not realise, even as Germany were struggling to beat anybody but Saudi Arabia in friendly after friendly, was that this was a troubled team struggling to play at anything other than snail’s pace, and with approximately the same levels of motivation. History decreed that they were hiding in plain sight.

Even when they lost to Mexico, beaten by wave upon wave of counter-attack that highlighted their lack of pace, we talked of blips and of ‘feeling their way into a tournament’. And then when they beat Sweden with a winner deep into injury time after another largely ponderous performance masked by a blockbuster ending, we collectively said ‘here we go’. Now we would see the real Germany. Now we would see the winning machine. And even as they played impossibly even worse against South Korea without any sense of urgency, we still presumed the goal would come, even if neither they nor we could see how.

That is what all these years of watching Germany have done to us; they have made us doubt what our own eyes can plainly see and assume that they will find a way. They always find a way, right. Now we can trust nothing in this world because it turns out that Germany can look terrible, be terrible and remain terrible, just like England.

And terrible they were. From back to front. From slow, vulnerable defence, through pedestrian midfield, to a striker who looks achingly average and largely immobile. On paper, Germany have an excellent front six – Toni Kroos, Sami Khedira, Mesut Ozil, Leon Goretska, Marco Reus, Timo Werner – but on grass, they stunk out Russia. They lacked movement, ingenuity, cohesion and all the other intangibles that contribute to a winning football team. It takes a special kind of incompetence to have 74% of the ball but conjure only six shots on target.

People with far more knowledge of German football can tell you how they have arrived at this nadir in their international history, while supporters of France, Argentina and Brazil can thank their chosen gods that the complacency of their own team – certainly a theme in this tournament – has not left them in a similar hole. The post-mortem will go on long into the next decade, never mind the night.

Whatever happens as this tournament enters its third week, it makes a refreshing change to watch as the world laughs at somebody else’s abject humiliation. If only the Germans had a word for it…