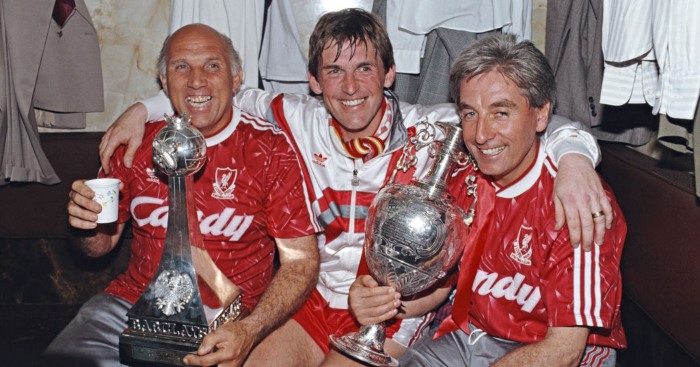 A little bit off topic here, but wanted to put this out there and see what others thought.

To explain, the jumping off point here is listening to last week’s Sunday 606 on catch-up. A Leicester City fan called up and was boasting that Leicester had one premier league title to Liverpool‘s none. Now this is obviously true, but are we really only including premier league in league titles? (Premier league being the Rover 200 to the football league’s mini-metro).

Another caller boasted that Chelsea have won more in the 21st Century than Liverpool, Arsenal and Spurs combined. Haven’t fact checked this myself but seems plausible.

However, take for example Liverpool’s 6 European cups. We don’t say, Liverpool won 4 European cups, then 2 in the 21st century – it makes no sense.

It’s this recency bias that bothers me. If you’ll bear with me a little longer, Leicester are a perfect case in point – their title in 2016 has no bearing on this season (most of the team is gone – either sold or down the pecking order), so what is the difference between 2016 Leicester and 1990 Liverpool – neither will help you win anything this season and both are historically equal.

I guess what I’m asking is where do we draw the line with the recency bias? Personally I think you win it, great, put in the cupboard, add it to the total, and move on to trying for the next.

I appreciate coming from a Liverpool fan this will irk some people, but please remember – we’re not all the same, and we’re not all terribly annoying (I hope).

World class discussion
I can’t help but think this world class discussion is pointless and is more influenced by marketing than by actual skill.  Football is more nuanced than to just say, for example, Raheem Stirling is world class and leave it at that, there are so many external things that go to making him so good.  It’s not just “the system”, it’s the players around him too.  Is Stirling as good if he doesn’t have De Bruyne or the Silvas not only putting goals on a plate for him but also distracting defenders.  I mean, you mark De Bruyne, the Silvas and Mahrez and there’s going to be some space open up or a chance for Stirling to sneak past you while you’re worried about the other five great players around you.

There’s also coaching.  Again, Stirling’s obviously benefited from having Guardiola man manage him so tightly.  If he moved to another team and this coaching wasn’t there would he perform a little worse?  Probably.  That’s not really down to the player though.

There’s how the clubs manage the mental well being of their players.  Happy, confident players play better.  So how does he like where he lives?  Has he been the victim of an attempted kidnapping?  It’s why players like Salah and De Bruyne under-performed at Chelsea but thrived elsewhere.

You can’t take players in isolation and say they’re world class.  You can’t lift a player from one team and move him to another and expect him to be the same player.  This isn’t a video game.
SC, Belfast

I’m not boasting but I really feel Chelsea has an amazing world class team.

1st on the list is Kante (best in the world and would walk into any team).

Azpi was pretty good a couple of seasons ago and Rudiger is a good CB but we really don’t have anyone other than Ngolo (in my opinion).

How do we define a ‘brilliant’ player?
How do we define a ‘brilliant’ player? I’ve randomly decided that a brilliant player must have played in one of Europe’s top divisions, and their first name must begin with a vowel. So with that in mind, I consider the following players ‘brilliant’: Andy Robertson, Albert Moreno, Oliver Norwood, Adrien Rabiot, Idrissa Gueye, Yves Bissouma (I bent the rules a little here and am considering ‘y’ a vowel)

What about you fellow mailboxers? What do you think makes a player ‘brilliant’? Have you an arbitrary definition for a clearly defined word you’d like to share with us for some reason?
Aidan, Dublin (I’d love to include Sadio Mane in this, but he just doesn’t fit the criteria)

Am I the only one that actually likes Momo Eleny?
Yes, he tends to pass the ball sideways but he isn’t as much a liability as Xhaka and he always seems to give a decent account of himself when he plays.

He may not take the ball from one end of the field to the other or stop any goals as such but he’s a defensive midfielder and is pretty competent when asked to play that role.

It’s not his fault Emery doesn’t fancy him and putting him the same bracket as that clown Mustafi is just insulting.

If you do end up moving on Momo, I sincerely hope you move to a club that will appreciate you.
Graham Simons, Gooner, Norf London

Appearance matters does it?
Dear F365,

1) Alex Ferguson and Bob Paisley, two of the greatest football managers of all time, looked like, respectively, the finance director of a mid-range freight haulage company and a pub landlord from the 70s.

I would say knowing what you’re talking about might have a bit more to do with being able to communicate with your players than looking like you can run around a bit.
Pierre (Arrigo Sacchi looked like a shoe salesman, because he was one, but coached one of the best club sides ever), Bristol

These were off the top of my head. Instead you went with Tom F**king Huddlestone. Really?!?
Tom, Devon, NUFC

Not quite 16 conclusions
Good morning,

Great mailbox this morning. Here are a few responses.

1. JCR and Frank Lampard. I read F365 every day and actually thought he was basically being given a free pass by the site for this season.

2. Ric and Batistuta. Trip Advisor amongst others says the statue does not exist anymore. You simply can’t move to Roma and expect the fans to leave it standing.

3. Mark MCFC. Is Mark worried about Man United? To say they are not in a better position than at anytime since SAF retired is bizarre really. Was always going to need several transfer windows to sort out post Jose. AWB, Maguire and James look like good buys, and never has that been able to have been written about three new signings for many a year.

4. R Harris. I know its my age, but just not bothering to have a Twitter account helps. Someone wrote recently Twitter just publishes what people used to only be able to shout at the TV. Notwithstanding that racism in any form is abhorrent.

5. Steve LA. Good point about being a physically fit manager to get respect of the players. But Miss Pinner 1982? She was my sisters best mate.

6. James LFC. Bailing out Bury? OK why not. But Bolton? I lived there for a short time in the 90’s, and would be often called Munich to my face if I ever made the error of letting on I was a Man United supporter.

7. Re several mailers. World Class is an over used adjective. Surely by definition there can only be three or four players per position on the planet.

8. VAR mails. Please, please continue to keep the VAR debate out of the mailbox. Though would be interested for you to advise what the mix of emails is in terms of percentages. For it, against it and get over it. (This mail clearly the latter category)

9. Enjoy a good weekend of footy everyone and Man United have a 3pm Saturday kick off. Amazing.
Ged Biglin, Shanghai

Ric Fanmail & De Gea-te
I just want to say thanks for publishing Ric’s delightful travelogue! It brought mirth to my lunch.

Also, apropos of yesterday’s Mediawatch, why is De Gea seemingly content at Utd now? He’s one of the world’s best keepers and should be in a team with a similar status, or at least a team competing in the Champions League! Surely PSG could nab him, or Juve could shift Szcezney to bring him in.
James Jones, STFC (Ian Holloway is a buffoon)

Ric’s memory isn’t wrong, there was a statue unveiled to celebrate Batigol, but it was one made by the fans rather than an actual bronze of Batistuta.

Apparently it was made of papier mache, and when Gabriel moved to Roma, the ultras disposed of it. This is all taken from the excellent James Richardson’s Golazzo podcast, so I may have slightly misremembered the details.

The Stadio Artemio Franchi is glorious though, and the perfect place to watch my first Serie A game there…anyone who’s going to Florence, tickets are surprisingly easy to get hold of even for big games, so try and get there if you can!
Jon, Bath City FC

Really enjoyed the Batistuta statue quest story from Ric Duncombe (once of Kampala, Uganda). I heard the statue was saved and smuggled to the USA where it currently resides buried deep beneath a park in Miami that David Beckham happens to own.
David lfc (just ask Gary Neville about the Liverpool fc shrine under his swimming pool)

To all the triggered rival fans
Message for all the triggered rival fans reacting with “Oh these liverpool fans can’t stop ramming it down our throats that their players are world class”. My response was to a fellow liverpool fan, and I merely argued his statement that most of liverpool’s players would be at a much lower level outside of Klopp’s system, by saying it was slightly unfair to those players abilities to claim that. I tried to back this up with why I believed these players were top drawer, but certainly enhanced by Klopp. The “world class” tag is an opinion and that’s all, jeez go out and get some fresh air, before you punch a hole through the wall. A bunch of Mancunian Andy Bernard’s out here.
johnnyWicky, Toronto, Liverpool Fan