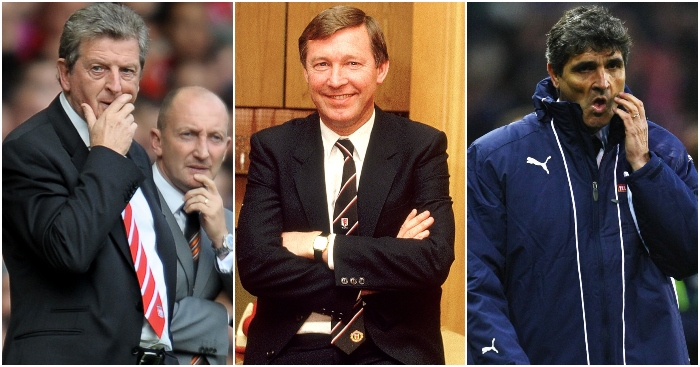 Manchester United could end the weekend in the relegation zone which, for those of you with no allegiance to the Red Devils, would be absolutely f*cking hilarious.

Liverpool: 2010/11
“If you are in the relegation zone, then you are in a relegation battle,” said Roy Hodgson after Charlie Adam and Luke Varney’s goals at Anfield gave Blackpool a 2-1 win, leaving the Reds in the bottom three for the first time in 46 years.

“The last few results have been very, very bad,” added Hodgson. “At the moment things look really bleak because they are conditioned by our most recent results.” Aye, football tends to work that way, Roy.

Liverpool stayed in the drop zone for the rest of October until Hodgson provoked his players into pulling their finger out with three consecutive wins. They were quickly back up to mid-table but that wasn’t good enough. Just after Christmas, Roy was removed and Kenny Dalglish returned to his Anfield throne.

Tottenham: 2008-09
Harry Redknapp doesn’t like to talk about it, but when he took over from Juande Ramos in October 2008, Spurs had only two points from eight games.

Ramos was sacked after Spurs failed to win any of their eight opening fixtures. A couple of draws constituted the worst start to a season in the club’s 126-year history.

Spurs won their first four games under Redknapp to climb off the foot of the table but they returned to the bottom three briefly in January after a 1-0 defeat at Wigan. Four defeats from their last 17 matches propelled Spurs into the top half and an eighth-place finish. Not that Redknapp ever brings it up…

Manchester City: 2002-03
City returned to the Premier League after their most recent jaunt to the second tier in 2001-02. Their first season back did not start well…

Kevin Keegan’s side won only two of their opening 10 matches and looked set for the latest in a long line of relegation fights. A 3-0 defeat at home to Chelsea in mid-October saw City drop into the bottom three for the first time since the opening day.

But those all-too-familiar surroundings seemed to jolt Keegan’s side. They won their next three – including the final Manchester derby at Maine Road – and five of their next seven to begin their ascent to a top-half finish.

Chelsea: 1993-94
Glenn Hoddle’s appointment as player-manager in the summer of 1993 sparked optimism around Stamford Bridge but that was in short supply come Christmas.

From the start of October, Hoddle’s Blues embarked upon an 11-game winless run, taking only two points from 33 available. By mid-November, after a 2-0 home defeat to Arsenal, Chelsea dropped to third from bottom where they stayed for four matches.

It wasn’t until two matches in two days between Christmas and New Year in 1993 that Chelsea’s fortunes started to turn. They lost the first of those games 3-1 at Southampton before finally earning a victory when Mark Stein’s goal beat Newcastle the following day. And City think they’ve got it tough.

Man Utd: 1986/87
The last time United were in the bottom three after more than a single game was in the earliest days of the Premier League in 1992-93, when they languished in 20th (back when the top flight consisted of 22 teams) after three matches. Sir Alex Ferguson turned things around spectacularly to guide United to their first title in 26 years. We can probably all agree that would br a stretch for Ole Gunnar Solskjaer this term.

The Red Devils were one place above the bottom three just over midway through the 1989-90 season but after September, the last time United dabbled with the drop zone was when Ferguson took over. They haven’t seen the inside of the bottom three after September since Ferguson’s first home game in charge, a 1-0 win over QPR earned by John Sivebaek’s goal which took them from 21st to 17th.

Arsenal: 1974-75
The Gunners can claim to be the team with the longest run since they were last relegated. We have to go back to 1913 for when Arsenal last dropped a division. They seem to have spent most of the 106 years since in sixth.

Arsenal have had plenty of poor starts but they generally get their act together by September. That wasn’t the case in 1974-75, however, when under Bertie Mee the Gunners won two of their first three then didn’t taste victory again until 11 games later. The last of those winless games was the north London derby, after which they were bottom of the pile.

The Gunners gathered themselves but could still only reach 16th come the end of the season, which was still a place higher than their finish the following year.