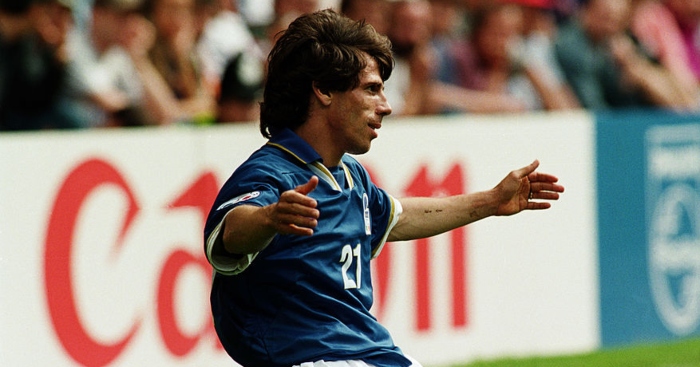 This piece first appeared on The Totally Football Show.com, home of Golazzo, a podcast about the history of Italian football, presented by James Richardson.

Diego Maradona arrived at Napoli in a blizzard of hype and confusion, so superbly documented in ‘Diego’, Asif Kapadia’s film about the great man. What amounted to a car chase through the Neapolitan streets ended in 80,000 people screaming holy worship at the San Paolo, and a press conference that was more a scrum than a respectful posing of questions. Club president Corrado Ferlaino threatened to call the whole thing off if the assembled media didn’t calm down a little bit. Halfway through, Maradona peered up at the ceiling to witness some giddy fans banging on the skylight. ‘I didn’t know what was going on,’ wrote Maradona in his autobiography.

Gianfranco Zola’s presentation at Napoli, five years later, was slightly more low-key. Luciano Moggi – the Ernst Stavro Blofeld of Italian football in the 1980s and 90s, always seeming to lurk in the background, the hand behind everything – had spotted this small kid with big hair playing for Torres in Sardinia and brought him over, at the same time as Massimo Mauro, who arrived from Juventus. The story goes, as told on the upcoming Golazzo episode about Zola, that Ferlaino took one look at the skinny, 5ft 6 Sardinian signed from Serie C and told Moggi that he could present him to the media, while he would introduce the taller and more established Mauro.

The two arrivals in many ways reflected their respective personalities, Maradona the extrovert (in public at least), living high and thriving on being the symbol of a team and city; Zola the introvert, the modest and unassuming type who once approached a group of men who were planning to kidnap him and asked if they wanted an autograph.

But despite the disparity in personas, the two had a master-apprentice relationship in those early days at Napoli. “He was my idol,” Zola told our own James Richardson recently. “The person I looked up to. So when we met I said to myself: ‘Try not to say anything stupid. Try not to do anything stupid.’ I stayed still, like a doll, saying nothing…and in the end, I looked stupid.”

Zola signed for Napoli at the start of their second Scudetto season, but things were already starting to go slightly awry for Maradona. Indeed, Maradona arrived for the start of the season late and in…not the greatest shape. Angry that Ferlaino had reneged on an apparent promise to let him leave the club for Marseille earlier that year, Maradona took his own sweet time returning to the club. ‘After the Copa America I went fishing in Esquina, in Corrientes,’ Maradona wrote. ‘I went skiing in Las Lenas, in Mendoza, and I enjoyed it, I enjoyed my first holidays for years. Napoli had messed me around and now they were going to have to dance.’

He may have wanted to punish his club, but the knock-on impact was that Zola was given a chance to impress earlier than a callow youth from the third tier would usually have done. But Maradona’s impact on the young Zola was not just due to his absence.

“The list is qualified, not long,” he said in 1997, just after joining Chelsea, when asked which players he looked up to. “Platini captured my imagination as a boy. Then I met Maradona. It was a flash of lightning. I don’t think anyone like Diego will ever be born again. I’ve learnt so much just from watching him.”

Maradona, despite his famously casual relationship with training, would stay behind after sessions to teach the young pretender how to take free-kicks and curl the ball in that Maradona way. “He was always fantastic to me and I will never forget the help he gave me,” Zola told the Daily Mirror in 1997. “He was the best player in the world and I learned so much just from watching him and training with him.”

‘He paid really close attention to the things I did during training sessions,’ wrote Maradona, ‘and some of it stayed with him.’ That work helped Zola significantly in some early games for Napoli when he stood in for Maradona which, for a wet-behind-the-ears 23-year-old, just signed from the relative footballing backwaters, came with obvious and significant pressure. When he did just that against Atalanta early in the season, things weren’t going well. “I was having a nightmare,” Zola said in 1997. “Everything was going wrong for me. I could hardly kick a ball straight.”

Then Zola got a chance, cutting in from the left, and he pulled back his right foot, remembering Maradona’s lessons. “I thought it was going to hit the corner flag but then it suddenly curled and went in. I just turned round and there were 60,000 people going mad.”

It’s quite touching listening to Zola – or ‘Marazola’, as he became known – talk about those early days alongside El Diego. “I was very lucky to be his team-mate and get to play with him as well as watch him train every day,” he told FourFourTwo in 2007. “The things he did! He was and will always be unique. Off the pitch, I always liked his simplicity. He was Maradona, yet with the team, he seemed just like an ordinary lad like the rest of us. He didn’t behave at all like a football star.

“One day when we played against Pisa…he made me play in the No.10 jersey and picked the No.9 for himself. For me it was the most beautiful thing I could ever imagine; Maradona letting me play in the No.10. Imagine my confidence, but especially my shock!”

That season they won the title again, but the following year is when things really started to go south for Maradona. He described the season as a ‘nightmare’, with assorted incidents which all came to a head in March 1991, after a game against Bari. ‘We beat them 1-0, with a goal by Zolita, Gianfranco Zola,’ wrote Maradona. ‘He was my substitute, usually, and on that Sunday we played together…We never imagined, neither one of us, nor anyone else, that it would be one of the last opportunities we would have to do so. I got picked for the drug test.’

Maradona claimed he was clean. Well, sort of: he claimed he was clean at that particular time, while admitting to a more general cocaine habit, and hinted that dark forces were at work when he tested positive. Zola was shocked – shocked! – to hear that drug-taking was going on. “I have great esteem and respect for Diego,” he said. “I can’t believe he took drugs. All Napoli players are upset as a friend is in deep trouble.”

Deep trouble indeed. Deep to the tune of a 15-month ban, much to the dismay of Zola. “A sentence as rigid as this?” he lamented. ”It is as if they have disqualified soccer for 15 months.” Maradona left Napoli to sign for Sevilla when the suspension ended, while Zola stayed and inherited the No.10 jersey for another couple of seasons, until financial problems at the club meant he was sold to Parma in 1993.

While the tag of ‘Maradona’s successor’ followed Zola around, to the point where it was mentioned in essentially every article about him in the early days at Chelsea, it’s clear that those two years had a profound effect on him, about both on the pitch and about the life of a superstar off it.

“It was very sad but I couldn’t help him,” Zola said in 1996. “He had so many problems because he couldn’t have a normal life. If he went out for a walk, the whole town wanted to touch him, then many bad people began to stay near him. We only really ever saw him at training. He’d finish and go away to his house – no-one could get near him.”

“I knew I was in the presence of one of the best talents of all-time and it was a blessing for me,” Zola told talkSPORT a couple of years ago. “I learned a lot from him. I liked him, not only as a player, but also a man. He was very humble and down to earth. He changed my life. His influence has been terrific.”

Six new episodes of Golazzo – including the Zola edition – will be released in the week commencing October 14. You can subscribe here, and they will all be delivered straight to your favoured device.