Home Mediawatch When is a ‘fluke’ a ‘masterful effort’? Plus, ‘Jose the Joker’… 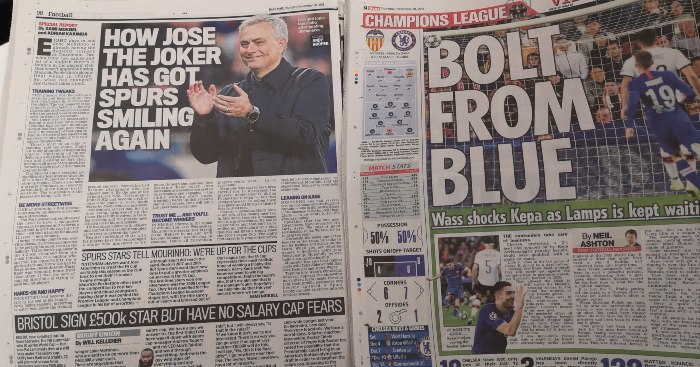 Was it from roughly the same position? No.

Was it in the World Cup? No.

Was it even a winner? No.

But why let all those negatives get in the way of claiming that an equalising goal from Daniel Wass against Chelsea in a Champions League group game ‘was Ronaldinho revival stuff, with a whiff of the Brazilian’s extraordinary strike against England at the 2002 World Cup’? Why not describe it as a ‘masterful effort’?

Ashton even returns to the theme later in his match report, writing:

‘You never thought it possible for Daniel Wass and Ronaldinho to be mentioned in the same sentence, but if it makes his day then a good deed has been done.’

Yes, Daniel Wass – scorer of the goal that keeps Valencia’s Champions League fate in their hands – will definitely be most chuffed to be bizarrely linked with Ronaldinho by the Chief Football Reporter of The Sun. That will absolutely ‘make his day’. After all, who doesn’t enjoy being massively patronised?

On the same page
Even Neil Ashton’s digital Sun colleague John Hutchinson wrote: ‘Just as it seemed Lampard’s troops would get three points that would all-but guarantee progression out of Group H, Daniel Wass curled in a fluke that left Kepa stranded.’

Love-in
‘JOSE MOURINHO is taking the softly-softly approach at Tottenham – and so far it is working a treat.

‘The Special One appears to have learnt from the meanness and moaning that caused so much misery in his time at Manchester United.

‘He has swapped the criticism for cuddles and the animosity for an arm around the shoulder’ – Paul Jiggins, The Sun.

Mediawatch particularly enjoyed the softly-softly way he substituted a man after 29 minutes.

Man speaks to colleagues
Over in the Daily Mail, Sami Mokbel and Adrian Kahumba combine to tell us how Jose Mourinho has ‘got Spurs smiling again’ in a week. ‘By winning two games against pretty average opposition’ would appear to be the obvious answer, but that doesn’t fill a whole page so they have broken it down.

Apparently, ‘tightening up Spurs’ defence is a key priority of Mourinho’s and focusing on how defend in all areas of the pitch has formed a bigger part of their match preparations’. Which we can all agree is going swimmingly so far. This is filed under ‘TRAINING TWEAKS’.

The second of the sub-headings is ‘BE MORE STREETWISE’ – and if that’s the second of your examples of ‘how Jose the Joker has got Spurs smiling again’ then you know you are in trouble. And the gist of that snippet is that the ball-boy thought to throw the ball quickly to Serge Aurier. And that is apparently the Mourinho effect. If only Pochettino had known that he could have propped up his crumbling Tottenham regime by asking some teenage boys to retrieve the ball with a little more speed. But then he’s not a winner, is he?

Thirdly, he’s ‘HANDS-ON AND HAPPY’ and it’s at this point that we learn that a man in charge for a week has been joking and having ‘regular chats with his players’. It’s almost like this is a man who has started a new job and wants to make a good impression and get to know his colleagues.

Fourthly, we have Mourinho’s promise to his players of ‘believe in me and we’ll become winners’. Now this is the crux of the matter and there is no cynicism here: A man who has won trophies telling footballers that they too can win trophies is pretty compelling. Definitely more compelling than everything else listed here anyway.

And lastly in this list of ‘how Jose the Joker has got Spurs smiling again’ is Mourinho having ‘several one-on-one talks’ with Harry Kane. For f***’s sake. Come back to us when a new manager decides not to talk to his most important player and current captain.

One result, two interpretations
‘JURGEN KLOPP celebrated his 100th European match as a manager with a vital point’ – back page, The Sun.

‘LIVERPOOL face a nervous finale to Champions League qualifying after being forced to come from behind to earn a draw against Napoli’ – back page, the Daily Mirror.

‘So, this was Jurgen Klopp’s 100th European game but it will not go down as one of his most memorable, not that he cares ‘ – Charlie Wyett, The Sun.

‘Klopp, managing in his 100th match in European competition, was apoplectic. Not sure at what exactly, but he was raging’ – Andy Dunn, Daily Mirror.

So to be clear, Jurgen Klopp was nonchalantly raving as his team claimed a vital but disappointing point.

Not the Mane man
Sadio Mane received a 6/10 across the board from all media for his disappointing performance against Napoli, but then there is Andy Dunn in the Daily Mirror:

‘Looked the most dangerous and always causing problems – 8/10.’

It’s quite the description of a man who had no shots, created one chance, was dispossessed three times and lost the ball with a poor touch an astonishing six times. A danger to himself?