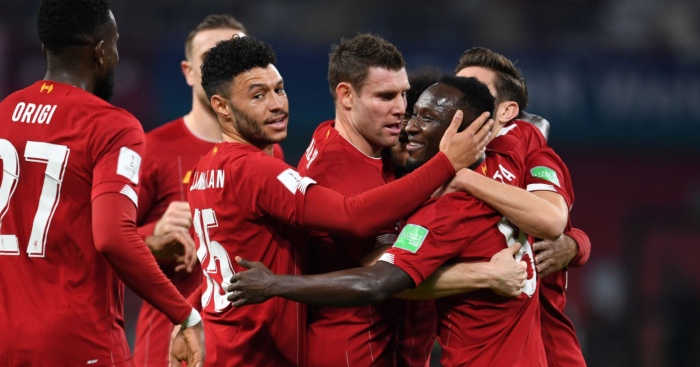 Thank you for the mails. Send more to theeditor@football365.com…

Denying the obvious?
Well, predictably the Liverpool fans have come out in force with myriad stats to prove why they’re actually “unlucky”!?

See this is why EVERYONE hates Liverpool, because of their entitled moronic fanbase. Believe it or not, I have a couple of Liverpool supporting mates, & they put up their hands week after week & admit how lucky they’ve been this season.  I asked one, when was the last time Liverpool were actually unlucky in a game, & his answer was CL final of 2 years ago when Salah injured his shoulder.

That’s a reasonable Liverpool fan. I recently watched City v United, & all the stats pointed to City (72% possession, more shots, more corners etc etc), but is there anyone who actually thinks United were not the better team & not deserved the win?  Liverpool have had unremitting good luck for over two years, & to deny that is to show just how big a ‘dickhead’ you are.  Just say, “we’re lucky & long may it continue!”  There are articles kicking around that prove Liverpool have been the main beneficiaries of VAR, & their relative lack of injuries is nothing short of miraculous.

Their own legend Jamie Carragher said on MNF that Liverpool were lucky against Watford & they deserved a draw, but you get moron after moron come out with their stats to “prove” they weren’t lucky.  Just keep your collective heads in the sand, but heaven help you when your luck runs out, you’ll then know how the rest of us feel.

Last nite was a perfect example, against Monterrey they got their usual dollops of luck, Gomez could’ve seen red, perhaps harshly, but EVERY other team has harsh decisions go against them, but not Liverpool.  And as I presciently stated in my last email, they somehow score a goal in the dying seconds (still don’t know how that ball went through the keeper! Guess the same way their last minute shot went through Sheff Utd keeper!).

Anyway, Liverpool WILL BE champions come may, VAR & LUCK champions, but champions nevertheless.

Enjoy it while it lasts, cos its already lasted longer than logically probable.
Fred, London

No touch after whistle sounds harsh
Not really a fan of Peter G’s idea.

The problem I feel is that its a bit strict. There are a number of times where you can touch the ball after it has been given legitimately, for example if you are running somewhere and is caught offside. We are going to give yellow cards for dribbling slightly after a whistle now?

Also what does “clearly allowed” mean? How is a player to know when is it okay to touch the ball? These things happen fairly fast.

Yes this can and is used to cheat and delay, but too strict can be a problem as well. Refs have a lot of leeway on what they can give a yellow to the player anyways, so why not just let them decide when it passes the “unsportsmanlike” barrier? Sure it can differ by ref, but thats the case with tackles already anyways.

A better solution in my opinion, would be to have more accurate injury times. Right now, the amount of injury time given is usually way less than the actual delays in the game (read it somewhere). If the injury time is more accurate, that will be more fair. Players will still delay to slow momentum but at least played time will be the same and VAR (which is already in most top competitions anyways) can already kill momentum when used.

That said while I’m not a fan of this idea, I’m happy to hear from Peter G again. Glad you’re doing okay after your previous update, hope you will keep writing to us for many good healthy years to come. 🙂
Yaru, Malaysia

The return of Peter Goldstein to F365 was something we all had on our Christmas lists. His latest article, about punishing disrupters, made for interesting reading, and ties in neatly with something Philippe Auclair said on Guardian Football Weekly on Monday. Auclair raised again his desire to see cynical/tactical fouls punished with a sin-binning. However, while I agree in principle with both Peter and Philippe, intensifying the punishment won’t necessarily reduce frequency of the crime.

In both cases, the reason for the “gamesmanship” (in the broadest definition) is usually to prevent the attacking team from taking advantage of a disorganised (or undermanned) defence. Breaking up play to receive a yellow card or be sent to the sin bin still grants the defence time to get back into position. Even if they are a player short, they will still have enough personnel to defend a ball launched into the penalty area.

There are three ways to combat this issue: the first is to speed up the yellow card process somehow, maybe by allowing the referee to use the same process as they do when playing advantage – a clear shout to enable play to continue while warning the offender a caution is imminent. Another option would be to ensure that only the players (on either team) who were goal side of the victim at the time of the foul can be there until the free kick is taken; everyone else must be behind the ball and a minimum of ten yards away from it, in the style of a penalty kick. That way, the attacking team would have a comparable situation to before the foul was committed, though it would be tough for the officials to organise. The third possibiity would be to follow the model of field hockey and allow players to take a quick free kick by dribbling the ball, rather than being required to pass to a teammate. There would still be retreating defenders, but the victim would have a better chance than against a properly formed defence.
Ed Quoththeraven

I couldn’t agree more that punishing the delaying cheats should be a thing.

A study was done in 2018 on the effective playing time in 37 European competitions. The Allsvenskan had an average ball-in-play time of 60.4% while the the Primera Liga was down at 50.9%.

I’ve got no issue with taking time to set up a free-kick/wall or the ref taking 15 seconds to give some guy a talking to. That’s an important part of the game. But annoyingly for Peter Goldstein, in an effort to stamp out all the other time-wasting, FIFA have already put some rules in place (Law 12, Pg 39 of the LOTG):

A player is cautioned and shown the yellow card if he commits any of the following seven offences:

• dissent by word or action

• persistent infringement of the Laws of the Game

• delaying the restart of play

• failure to respect the required distance when play is restarted with a corner kick, free kick or throw-in

• deliberately leaving the field of play without the referee’s permission

The three bolded bullets should cover all the delays you mentioned, it’s just a matter of actually enforcing them.

Yes, there are issues. You all know those fouls where the fouler and the foulee both think (or pretend) it’s their kick. Or a team scoring a late goal to get within one and the goalie not wanting to let go of the ball he picked out of his net cus it’s their kick-off…

Still, enforcing these cautionable offenses could get us up to maybe two-thirds playing time, no?
Dickon, LFC Ottawa

Baffled by anger
Just reading the news headline today that City are ‘furious’ and the handling of the situation by Arsenal is ‘shambolic’.

Remember we are not talking about a player here that is subject to the normal transfer window rules and has to go through a formal registration and confirmation process with the league.

As far as i am aware, there is no contract between City and Arsenal, only between Arteta and City. Isnt down to Arteta to hand in his resignation notice? If he has a contract that stipulates compensation based on an early termination, he confirms that amount and pays off the contract. Separately obviously Arteta gets compensated by Arsenal to do so.

Yep City might be upset they are losing a good assistant coach (although that’s a separate debate), if they want to keep him maybe they come up with a better offer?

The above should be no different to normal business, yes some companies will stipulate non-compete clauses, that is somewhat unrealistic for football. Everyone is in the same industry and competes with each other to an extent.

Where does it stop, do Arsenal get furious with City because a turnstile operator got offered a job in Manchester and they didnt discuss it beforehand?
Personallly, I dont think Arteta is right for job and is not ready…At least not ready to deal with the internal politics at Arsenal and the Kroenkes.
Andy, Toronto

Getting caught in transition
I don’t want to sound disrespectful but the Mexican champions were remarkably good. We held the ball well but struggled to penetrate without our stars on the pitch. Weirdly I had imagined beforehand that a midfield of Keita and AOC would be too energetic for anyone to cope with but without a proper fulcrum like Fabinho to recycle possession and give us variation it wasn’t that life changing. We also seemed to get caught in transition a lot. That’s perhaps also a consequence of playing a very good centre mid as part of a back four.

When Firmino came on I said to my wife, “Bobby is coming on. Do you think he can rescue this?”. She said no and then when I appealed she said she picked the answer that she thought would minimise the conversation. Ouch. In fairness if you ask her how many Liverpool players she knows it’s doesn’t stretch much beyond Emile Heskey. Glad she knows nothing about football.
Minty, LFC

China to wait their turn to host World Cup?
I was interested to read this in your ‘football stuff that changed this decade” article:

“the list of confirmed and potential World Cup hosts between 2018 and 2030: Russia, Qatar, China”

As far as I remember, starting from 2010 FIFA had decided on a continental roster so every World Cup in turn should be hosted in Africa, Americas, Europe, Asia. The WC in Qatar 2022 would conclude the first cycle, and ollowing that schedule would mean Africa 2026, Americas 2030, Europe 2034, Asia 2038. So the earliest China could host would be 2038.

But of course it’s FIFA, so just bung them truckloads of cash and I’m sure China 2030 could happen.

Also, this in Yash’s email brought me a smile “…they couldn’t reach the heights or the sheer numbers of Messi/CR7”,  having seen Ronaldo’s goal for Juve yesterday in which he literally reached heights that other players can only dream of!
James, Switzerland

New heights
That Ronaldo goal last night was something else, he hung in the air for about 3 seconds and his feet were level with the defenders waist….and they were also mid jump.

The guy is a machine, I cant see him fading and will keep going on a Zlatan like path.

But who scores/scored the best headed goals ever, not just a one off but consistently? Ronaldo is up there for sure.
Ben, Manchester

Arteta’s hairline
How long do you give it in charge of Arsenal before Mikels’ magnificent hairline starts to show signs of strain? Maybe that’s what’s holding the whole deal up.
Tom Wah, Shropshire (it is magnificent tho)

Am I the only one looking forward to the new year when a commentator at a Liverpool game will have to say “Fabinho, Minamino, Firmino” in quick succession?