Home F365 Features When managers are sacked in March: Are Saints too late? 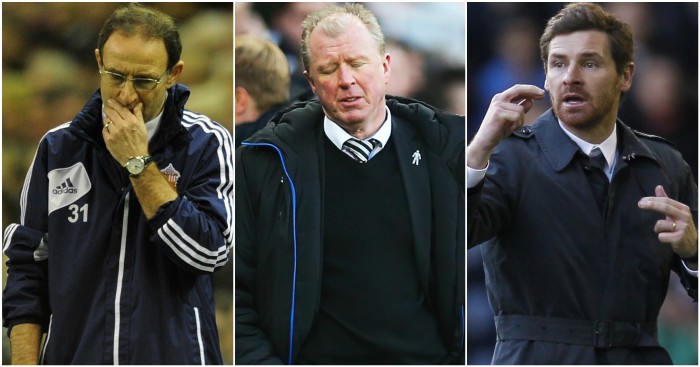 Southampton sacked Mauricio Pellegrino on Monday evening, ending a 30-game tenure that has seen them gradually slide towards the Premier League relegation zone. The Saints are hoping a new face will galvanise the squad and lead them to climb away from the bottom three. Mark Hughes, then.

But history suggests they may have left it too late to make a considerable difference.

Pellegrino became the 16th manager to depart a Premier League club during March since 2000. All but two were sacked, with Glenn Hoddle leaving Saints in 2001 to take up the Spurs job, while Kevin Keegan left Man City by mutual consent in 2005 shortly before he was due to depart at the end of that season.

Aside from Andre Villas-Boas, whose Chelsea squad were failing to mount a title challenge, the other 12 managers were axed because of the looming threat of relegation – though for George Graham’s Tottenham in 2001, the possibility was remote.

The other 11 managers sacked in March all left teams in 16th place or below. None of the six sides that were in the bottom three when a change was made survived – all were relegated with no positive difference to their place in the table. At least for Southampton, they haven’t slipped below the line yet…

But more worryingly for Saints, three of the last four changes were made by sides in the same position: 17th, one place above the relegation zone.

Dick Advocaat managed to drag Sunderland up a place, but Steve Agnew and Rafael Benitez failed to halt Boro and Newcastle’s slides, with both being relegated. Agnew had 11 games in charge and Benitez had 10 matches in which to save their sides. Whoever Saints appoint has only eight games, plus a possible FA Cup campaign to consider.

While Roberto Di Matteo brought Champions League glory to Chelsea, in terms of Premier League position, the 15 changes together add up to no difference come the end of the season. Stuart Pearce made the biggest tangible improvement, dragging City up four places before the end of the 2004-05 season, while Stuart Gray’s Southampton slid three places in 2001 after Hoddle left. Those City and Saints sides, though, were tucked up safely in mid-table.

Of the teams 16th or below when a managerial change was made, only David Moyes’ Everton and Advocaat’s Sunderland gained places in the table. For six sides, it made no difference, while three relegation fighters slipped further.

The 15 Premier League managers sacked in March since 2000